For the first time in over two decades, it rained in the morning.

“I don’t think we own an umbrella,” said Melanie. “But there may be an old raincoat in the closet.”

Pauline glanced at the wall of precipitation outside their window. “Be sensible. Raincoat or not, you’re not going outside into that.”

Melanie peered into the depths of the closet by the garage, the one where they stored old things Pauline hadn’t decided to donate or discard. It smelled of mothballs. “I remember playing in the rain when I was a kid. After all, it’s only water.”

Ever since the scientists figured out how to control the weather it was nothing but pleasant days and mild winters. It only rained on the designated nights, between the hours of two and four in the morning.

“Melanie, this is serious. There’s no telling what the people who took over the satellites will do next. You do know this technology was invented as a weapon, right?”

The world had been an uncertain place back when they were in college, their courtship in the process of morphing from the giddy exuberance of new love into the comfortable pattern of a long-term relationship. The United States, China, and Russia saber-rattled with their weather satellites, moving clouds and wind patterns like pieces in some complex board game. It was hailed as the New Cold War, and the late-night comedians quickly exhausted all the obvious weather jokes.

Three years later the two of them bought the house and were in the process of moving in when the Treaty of Curitiba was signed. Governments handed over control of the weather satellites to an international agency that set about using the technology to combat global warming and disperse hurricanes. The future seemed bright and they were full of hope.

“I read the manifesto the hackers posted online,” said Melanie. “They want better resource distribution for everyone, not to lob tornados at us.” The hacktivists who gained control of the satellites hadn’t done anything dangerous, and were trying to negotiate with the World Weather Authority. But they did remind millions of people how irritating inclement weather could be. She frowned; the raincoat was nowhere to be found.

“That’s the rhetoric of all revolutionaries. It’s no excuse for hijacking the satellites. There are legitimate and law-abiding ways to air one’s grievances.” The sound of distant thunder underscored the indignation in Pauline’s voice.

“Come on, it’s just some rain. You telecommute, anyhow.”

“But you don’t! I want you to stay home until things settle down.” Pauline’s voice softened. “I worry about you.”

Melanie sighed. They never really fought, but Pauline was strong-willed and assertive whereas she was often ambivalent and averse to argue. It was no wonder Pauline got her way most of the time whenever their opinions differed.

“Back in college you would have been the first to protest on behalf of the hackers,” said Melanie.

“I was younger and less smart then.” Pauline nudged her glasses up the bridge of her nose. It was her tell; she did this whenever she was less sure of her argument than she’d like others to know. Melanie found it adorable.

“They just want fair treatment,” said Melanie. “Weather patterns are global. If it doesn’t rain in our town, it has to rain somewhere. And the first-world countries claimed the lion’s share of the benefits from weather control technology like they’ve done with all the other resources. The hackers want the sun to shine over the morning commute where they live, too.”

“It’s not like I’m unsympathetic to their cause, but they’re messing with people’s lives. That’s terrorism.” Pauline was getting worked up and she seemed to realize it. She paused, breathed. Her voice softened. “The Weather Authority isn’t perfect, but they do a lot of good for the entire planet and not just for the superpowers.”

“Perhaps. But sometimes trusting them to make the right decisions isn’t enough. Sometimes people need to know their voices are heard. We’ve been too comfortable for too long,” said Melanie. “Change is coming.” She was almost certain she was still talking about politics.

Pauline frowned. “They’ll be arrested, sooner rather than later. Until then, it’s safer for both of us to remain indoors.” She turned to the coffeemaker, filling the filter with enough grounds to serve both of them.

Melanie had grown comfortable with allowing Pauline to make most of the decisions over the years. But sometimes she was right; sometimes it was better to face adversity head-on rather than let it immobilize her. Her grandparents’ generation lived each day under threat of nuclear war and they went on with their lives instead of waiting meekly for the world to become a better place, for the inclement weather to pass.

“I’m going to work,” said Melanie in a tone that brooked no argument. “I’ll call you when I get there. I love you.”

She grabbed her purse and stepped out the front door, embracing the warm droplets as they soaked her hair and clothes, and never letting the rain slow her down.

Copyright © 2017 Alex Shvartsman. This story first appeared in Daily Science Fiction. Reprinted with permission of the author.
Image Credit: strong rains and hail in the city by Claudia Dea, Creative Commons BY 2.0 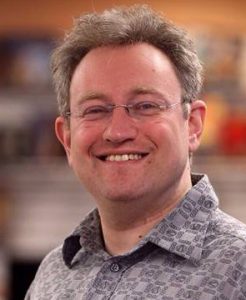 Alex Shvartsman is a writer, translator and game designer from Brooklyn, NY. Over 100 of his short stories have appeared in Nature, Galaxy’s Edge, InterGalactic Medicine Show, and many other magazines and anthologies. He won the 2014 WSFA Small Press Award for Short Fiction and was a two-time finalist for the Canopus Award for Excellence in Interstellar Fiction (2015 and 2017). He is the editor of the Unidentified Funny Objects annual anthology series of humorous SF/F. His collection, Explaining Cthulhu to Grandma and Other Stories and his steampunk humor novella H. G. Wells, Secret Agent were both published in 2015. His website is www.alexshvartsman.com