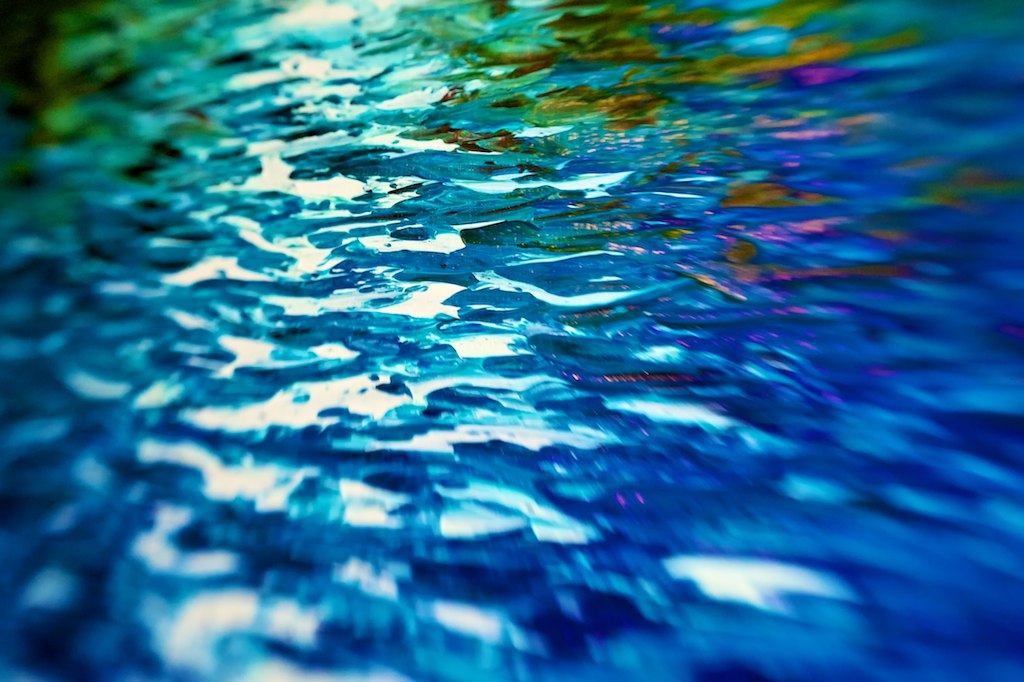 Some particular trick of the moon, the weather, and the Earth’s closeness to the sun had pulled the tide all the way to 5th Avenue, a good half block further uphill than usual. The city had put out an alert, so Jordyn knew to clear out the basement ahead of time. Their landlord was smart enough to have the foundation sealed years ago—that would be fine—but there wasn’t much to be done for cardboard boxes and old futons. Those had to be kept above the tide line, or they were garbage.

Her girlfriend, Mia, had paused on the first floor landing to breathe, a disintegrating tomb of Jordyn’s family albums clutched in her hands. Its weight eased for a moment as she rested an edge on the railing. “We should toss these,” Mia had said. “You digitized them years ago.”

Now she sat cross-legged on their bed while Mia showered, a stack of albums on the duvet beside her and another open in her lap. She peered at the careful handwriting under each photograph, names and dates and in-jokes, most of them incomprehensible. The photos had been taken with cell phones and carefully printed out, an anachronism even then. Her grandmother had pressed hard when she wrote, and as Jordyn ran her fingertips over the pages she could feel indentations beneath the ink. The album smelled of dust and old glue and a worrying hint of mildew.

Jordyn had copied one—taken a photo of a photo, found a place up in Bushwick that still did small print jobs, bought a silver frame secondhand at the Brooklyn Bazaar—and set it on the wooden dresser beside their bed. Her grandmother had taken it decades ago, when her mother was a little girl and the Gowanus canal only rarely ventured out onto the streets.

In the photo, a small, smiling version of Jordyn’s mother sat on the stoop of her grandparents’ house. She was an almost-copy of Jordyn herself: curly black hair, brown skin, freckles on her cheeks and bare shoulders. The house was yellow brick, with whitewashed iron bars over the windows and a little flower garden tucked between the concrete stoop and the stairs down to the cellar. Her grandparents had bought it in the 1970s for very little money, and, at the time the photograph was taken, were rightly smug about their foresight. Back then they could have sold it for a million dollars to developers who’d have cheerfully replaced it with a narrow stack of condos.

They’d stopped using the cellar after Hurricane Oscar. Hurricane Andrea had ruined the curtains and the carpets on the first floor, and they’d been forced to sell the house for little more than it cost to buy a new car.

Jordyn lived just up the hill, now. The yellow house in her picture wasn’t large—two stories and a basement—but on most days, its top story rose out of the lagoon. She liked to look at it from her roof in the late afternoon, when the warm golden sunshine made it look buttery and romantic. Like it had sounded in her mother’s stories, back when she was still alive to tell them.

The pipes thumped as Mia turned off the water. She walked out of the bathroom in a cloud of steam, her stout brown body naked and dripping as she toweled off her hair. “Moon’s out,” she said.

Jordyn closed the album in her lap and set it on top of the others. The bed creaked as she slid to the edge, tucked her feet into her slippers, stood up; she stretched her arms above her head and her muscles resettled. “It’s a king tide,” she said. “Highest this year. By a lot.”

Mia pulled her head through a cotton tee shirt. “We should drink a couple beers on the roof.”

Jordyn opened the door to their apartment, then turned the lock so that the deadbolt would catch on the frame and keep the door ajar. Theirs was the top floor; they climbed one flight of steep marble stairway to the roof. Two bottles clinked together in Mia’s hand, held by their necks between her fingers.

The winter had been mild, but little mounds of rotten snow hid in the shadows, and Jordyn rubbed her arms through her sweatshirt as she walked across the tarpaper. Through the steam of her breath, she looked out over a city of brick and stone and water. Behind her swelled the high-rent higher ground of Park Slope, dry townhouses climbing up the hill to Prospect Park, Flatbush, Windsor Terrace, Crown Heights. Neighborhoods that emptied this time of year, when everyone escaped to their condos in Georgia.

Before her, an archipelago.

Real estate agents had started calling it “Gowanus Beach,” which Jordyn thought was pretty misleading, even by real estate standards. At least when people said Red Hook was “The Venice of Kings County” that evoked a useful image: water-stained townhouses and floating wooden walkways, plastic kayaks tied up in front of corner bodegas, tanned women in sundresses puttering around in little zodiacs with outboard motors, the East River lapping at second-story windowsills. “Gowanus Beach” implied sand, maybe sea-smooth stones, even the muddy shore of a lake. Nothing about “beach” said crumbling asphalt, or concrete gnawed away by the tides, or exposed rebar skeletons crumbling into rust, or the bloated carcasses of cheap student furniture bobbing up from drowned garden apartments.

The wind was wet and heavy. Jordyn shivered and looked down at the rippling gray water. The tide had swallowed her grandparents’ house entirely.

Mia popped their bottles open on the low brick wall of the facade. They stood in the cold and looked at the city, at the full moon in the blue evening sky, at the waves. A trash barge puttered along the street below, pausing every half-block for building supers to add to its load. Jordyn could hear the siren of a fire boat, but couldn’t see the boat itself, nor the smoke.

Jordyn took a sip from her beer, which was warm and tasted of hops and cardamom. “The tide’s supposed to drop all the way down past Fourth Ave,” she said. “I thought I might go for a walk.”

“It hasn’t gone out this far in years.”

“Still.” Mia nursed her beer in silence for a while, time measured out in the swish-pop of her sips. “When was your last tetanus shot?”

“Couple years ago. Remember? I fell off Madison’s dock.”

The sirens faded. Jordyn stepped into the warm space beside Mia’s body and slid an arm around her thick waist, tucking her hand into the far pocket of Mia’s coat. “I’ll be fine,” she said.

Anticipation kept Jordyn from sleeping soundly, and she woke before her alarm. She had dreamed about riding the old subway system her mother had told her about. She dressed by the amber light of the street lamps, pulled a coat on over her wetsuit, slipped her feet into her reef shoes. Kissed Mia on the forehead and closed their bedroom door.

Mia had set the big flashlight to charge before they’d gone to bed. Jordyn took it, and her set of keys, locked up the apartment, descended the stairway in rubber-soled silence, and stepped out onto the empty sidewalk. The water was gone, but the tree wells were frozen with mud.

As Jordyn walked downhill toward Fourth Avenue, below the usual tideline, she had to pick her way around soggy timber, hunks of old insulation, rusted soda cans, tangled knots of plastic shopping bags—the usual trail of city detritus left behind by high tide. She passed under the elevated boardwalk running along the east side of the avenue, a tourist attraction some mayor had built when she was a little girl. The wreckage of a gull had caught on one of the pilings.

Beyond the boardwalk, crumbling asphalt dissolved into a sort of coarse black gravel, bits of the roadbed mixed in with the sand and soil and stones that had once supported it. In places, the steel tubes and concrete cylinders of the old infrastructure were exposed—gas lines, water mains, sewers, electricity. Round black holes gaped open, liquid noises echoing up from underground. Most of the old manhole covers had been stolen by trophy hunters years ago. Jordyn chose her steps carefully, eyes on the ground.

Once she reached the buildings on the far side of the avenue, she paused to look behind her. Only the foolish or the desperate would eat anything fished out of the Gowanus lagoon, but the boardwalk was crowded with seafood restaurants hoping to capitalize on the maritime atmosphere. Their neon signs still winked at her from above shuttered doors and windows, criss-crossed by the black silhouettes of utility lines.

The canals of the lagoon were lit, but not well, and the low tide made the landscape unsettling and strange. Buildings were taller than she remembered; boats moored in shallow water now rested on the ground.

The lagoon had retreated to a few yards below the avenue. Jordyn switched on the flashlight and waded in one cautious step at a time, careful not to shift her weight forward until she was sure of her footing.

The water was cold. Her toes were numb within half a block, but that was fine. The soles of her shoes were tough enough for nails and glass, and she didn’t have far to go.

In the LED glow of her flashlight, the yellow brick house looked almost white. For a disoriented moment, she wondered if she’d gone down the wrong street, or misremembered which side of it the building was on. Someone—a thief, an interim owner, the tide—had taken the bars from the lower-story windows. And the brick was striped with stains, each line a marker of the lagoon’s creeping progress uphill.

But the black iron numbers hanging above the door were the same. This was the house, reclaimed from the tide, if only for tonight. From this stoop, her mother had watched the water come.

Jordyn was up to her waist in the lagoon. Her feet still had some feeling left, and she poked around with them under the night-black water, looking for the first step. Finding it, she climbed the uneven stairs, water running down the legs of her wetsuit and dripping from the saturated hem of her coat, to finally sit on the stoop, her back against the front door. Her feet were still in the water, and it tickled as it lapped around her ankles.

She dried her hands off on her hair, then tugged her phone out of a waterproof pouch in her jacket. She held it up in front of her, looked into its little black eye, and smiled. 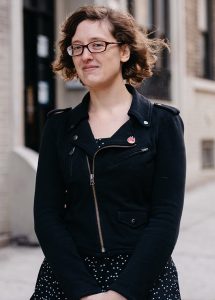 Alison Wilgus is a Brooklyn-based writer for comics and prose, with graphic novels both published and in the works about human spaceflight, aviation, and time travel (alas, not at the same time) from Tor and First Second Books. Her interest in short fiction lead her to attend both Clarion West and Launchpad, and her stories have previously appeared on Strange Horizons, Terraform, and Daily Science Fiction, along with an upcoming debut in Analog magazine. She tweets as @AliWilgus and you can find many of her comics and stories at alisonwilgus.com.