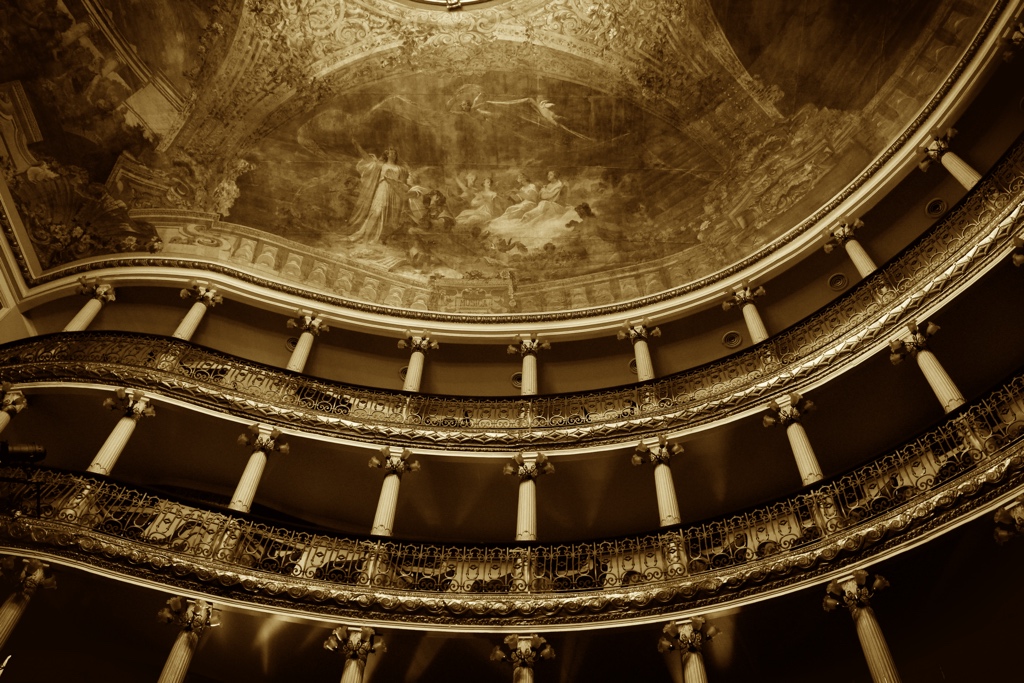 Felipe Santos da Silva swallowed. His palms were slick with sweat—whether due to the tropical heat or his nerves, he couldn’t tell.

He looked at the city that, twenty years earlier, had been a boomtown, the jewel of the Amazon rain forest. Before the population decline that started in the early 2020s began to take its toll. Today, no one walked the streets. The encroaching vegetation reclaimed the asphalt.

He pushed open the door.

The large wooden panel squeaked as it moved. Wind disturbed dust and paper in the foyer. There was a time when someone’s head would have rolled for such things. He sighed.

The staff was gathered in the auditorium, thirty people lost among the hundreds of seats inside the Amazon Theatre. Built in the 19th century to host the high society of the time—and to bring Caruso to the Amazon—the majestic, gilt-and-plush room seemed too grand to hold these men and women in worn grey work clothes.

“What’s the news, Felipao?” Simona asked. Big and boisterous, she was the self-appointed spokesperson for the staff.

Alarm broke out on the faces in front of him.

“Are they going to shut us down?” Joao asked.

Felipe found his voice. “No. But they’re not going to pay us any more. We’re allowed to stay on as volunteers, but there’s no more funding for the opera house.”

Shock rippled through his audience. “But this is a national treasure. They can’t close it.”

“Tell that to Brasilia,” Felipe said, no longer able to hide the bitterness.

“What did you tell them?” demanded Andrés, a mulatto who’d come in from Sao Paulo five years before.

“They didn’t let me tell them anything. They sent me a letter.”

“Call someone. Tell them about us.”

“There has to be someone.”

“Some director you turned out to be.” The man stormed out, followed immediately by a couple of others. More trickled away, giving him regretful looks as they did so, but leaving all the same.

They knew how Brazil worked. On one hand, one heard stories of the state paying people for jobs that no longer existed until the day they died. But once it acted, that same bureaucracy ensured that decisions stayed irrevocable. It took so long to get anything done that it was often better just to walk away. His former employees knew that.

When the exodus ended, fewer than ten people remained. Every single one of the faces looking back at him had been employed in the theatre before he arrived. Most of them had been born in Manaus and had families there.

“What will we do?” Simona said.

“I don’t know. Maybe you should go to Rio like everyone else.”

The rest nodded their agreement. They knew about life in the big cities. Better to be poor where one could maintain one’s dignity than packed into a teeming shantytown.

Another woman spoke up, one of the few stagehands still on staff. Her peers had resigned in disgust when it was announced that there would be no more national productions, that the theatre would only be open to local plays. “Why are they doing this to us?”

How to explain to her that the migration to the megacities that had emptied the streets had also opened the door to the ecologists who wanted to return the Amazon basin to its native state? How could someone born and raised in a city, and who’d lived their entire life there, understand that the inhabitants were actually the expression of an ancient colonial aggression, and therefore not worthy of the government’s money?

“The world is changing,” was all he said in reply.

“Can’t you do anything?”

Felipe nearly said no and turned away, leaving his former employees to dwell on his failure.

But the thought of what he would do next stopped him. What prospects did a fifty-five-year-old director of a failed opera house in a disappearing city have in a place like Rio? He would vanish into the slums, never to be heard from again.

“I think I have an idea,” Felipe said.

Heads turned his way, the faintest glimmer of hope visible under the despair.

“How would you,” he took a quick count, “just the nine of you, plus me, feel about becoming the owners of the theatre?”

“That’s stupid. What would we do with it?”

“To start with, we could live here and maintain it. Then we could think about staging plays.”

He could see the gears in their heads turning over. Each of them seemed to be thinking about their own homes—most of them in bad areas which flooded and consisting often of only two or three small rooms—and comparing them with the grandeur and luxury of even the smallest of the theatre’s rooms … and there was more than one room available for everyone, with rooms to spare.

“They only said they would stop paying me, but I’m still the director. The deed to the land is in the vault in my office. They left it here when they closed the last bank. If I can find a notary public, I can transfer the property to anyone I like. It’s within the authority of the position although, admittedly, it’s a bit unconventional.” No previous director would have dreamed of it.

“They’ll throw you in jail.”

“Perhaps.” Felipe didn’t think so. If any bureaucrat even noticed the transfer of what was now officially jungle land to a small group of locals, they’d likely approve. If not, he would face the consequences. “But by then it will be too late. Should I go get the deed?”

As he walked up the grand staircase toward his office, Felipe reflected on the vagaries of progress. When the opera house was built, it symbolized Brazil’s victory over one of the greatest natural barriers known to man: the Amazon rainforest. It was man triumphant over nature, unstoppable.

And now, in preserving this symbol of that earlier age, he spiritually joined the conservationists who, in defying the government for decades and eventually succeeding in returning the Amazon to the wild, had contributed so much to the downfall of Manaus and its industrial-age glories.

Felipe smiled. As the director of an opera house, he’d long since grown to appreciate irony.

Gustavo Bondoni is an Argentine novelist and short story writer who writes primarily in English. He has recently released three science fiction novels: Incursion (2017), Siege (2016) and Outside (2017) His latest book is a comic fantasy novel entitled The Malakiad. He has over two hundred short stories published in fourteen countries. They have been translated into seven languages. Many of the stories are collected in Tenth Orbit and Other Faraway Places (2010) and Virtuoso and Other Stories (2011). The Curse of El Bastardo (2010) is a short fantasy novel.