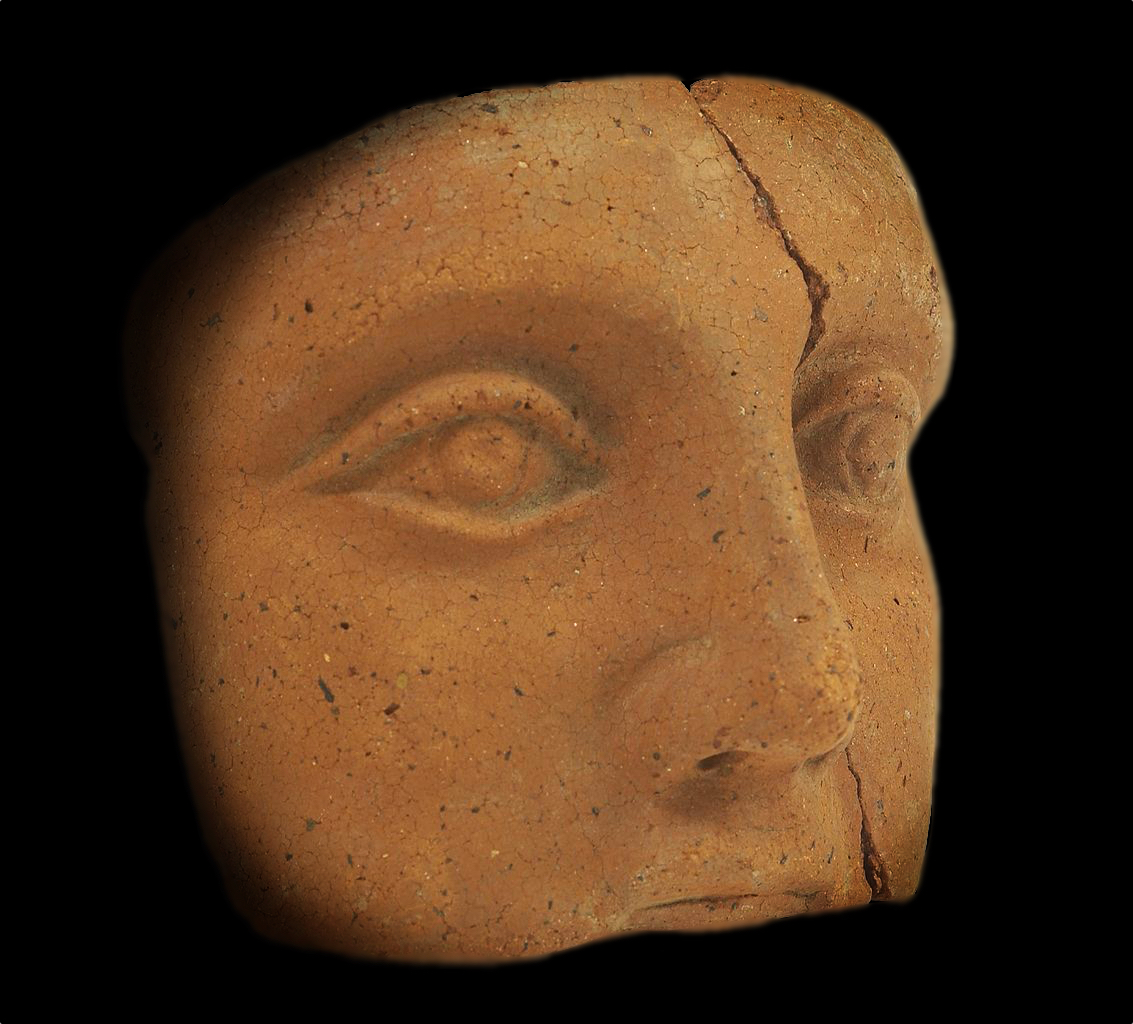 Beyond a small dark door, in the magical-genomic laboratory of Irindeh University of Subtle Mechanics, Nenadi’s mistake waited. Nenadi guided Anahah, her partner-in-all-things, past the scarred worktops and equipment cabinets, all dyed crimson by the light that filtered through an afternoon dust blizzard. Golden sensory circuits glinted in Anahah’s terracotta skin.

“And you want to bring humans back why?” Anahah asked.

“You and your philosophy.” Anahah smiled. “We have so many genomes banked, so many of God’s creatures to reintroduce to the trial ecosystems. Why such a disruptive mammal? Why not ocelots? Or otters?”

In spite of her trepidation, Nenadi laughed. “You just like English o-words.”

“Any other large mammal—”

To a golem’s eyes, the human inside appeared pallid as a grub, with unbaked skin and unfinished, asymmetric features. A mere six feet tall, the undressed, haired creature waved. “Hi.”

As close as Anahah now stood in the multipaned glass Circular Church on Infinity Rise, Nenadi did not wish to look upon her. Instead she peered down into Irindeh’s adobe structures. In the stone gardens, Nenadi had often passed off-duty hours playing tabletop mah ren with Anahah. Would she ever again hear Anahah’s laughter over the improbable genesis of multicellular biologic life through the sexual reproduction of slime molds?

Dinrah clicked her teeth, to gain Nenadi’s attention. Today she served as Nenadi’s Judge of the Word, for she had birthed Nenadi from the kilns and thus would be inclined to mercy.

“You may begin,” Dinrah said, “with finding the human’s location in scripture.”

“I was reading the last chapter, concerning God’s garden,” Nenadi said, “when I found that a maker might lie beneath the magical-genomic laboratory itself.”

As Nenadi had matured into her role, she had learned her hollow loneliness was atypical. Other golems did not speak in metaphor about experiencing God. God’s will had not been baked into her. Where Nenadi soared like a particle on God’s winds, Anahah was the storm.

“I decided to verify this in person before coming forward,” Nenadi continued.

“Once you confirmed the information’s veracity,” Dinrah said, “why not bring it to another’s attention?”

In the bunker, beholding that solo metal casket, Nenadi had known—with a certainty she had imagined every other golem always possessed—that she would find her answers.

“I was curious,” Nenadi said.

Anahah flinched at this blasphemy. Her tiny motion spoke hugely of her condemnation.

“Why wake the animal from its magical sleep?” Dinrah asked.

As Nenadi had opened the ark, chill air had gusted over her. The human animal inside bucked, gasping for breath. Tubes snapped out of its sphincters and openings. The casket’s lights dimmed. The animal moaned, a sound escaping its mouth like the wind, and bent at its middle to sit upwards. It braced its hands on the casket’s edge and spoke in a voice light as sand.

“I woke it because I wanted to,” Nenadi admitted.

“You, of all golems, must know that none of the trial ecosystems can yet support large mammals,” Dinrah said. “Its casket cannot be reactivated, now that you’ve broken its spell. In order to judge you with leniency, I need to determine your motives. So far I deem your rationale insufficient. Why did you do this truly?”

“To understand why I am different,” Nenadi said.

“In what way are you different?” Dinrah asked.

Nenadi would not say, not under any circumstance.

Anahah left the Circular Church, and returned with the human. It had been swaddled in protective yeast-spun silks, for atmospheric particulate could damage its fragile external organs and tender lungs. How could such a tiny, delicate thing be responsible for planetary devastation?

The human removed its veils and tossed them onto the tiled floor.

“You are an animal with a name.” Dinrah’s English possessed a neophyte’s stiffness. “Jacob Metz. Your purpose is to gather data on golems’ progress reclaiming the Earth, to see if it is yet suitable for human life. So Nenadi tells us.”

“Just incredible.” The human animal toddled over to the windows. “Names! Buildings. Clothes? You don’t need clothes. Is that one ornamented? Wow. I wish Fumiko could see this.”

Just as in the ark, its voice spiked disappointment through Nenadi. Her inability to hear God had led her astray. This animal couldn’t tell her why Anahah’s presence filled the absence Nenadi had been born with. Anahah had, over time, lacquered Nenadi’s existence with vibrant meaning.

“We are the innocent people,” Dinrah said. “For we are not biologic, and do not kill to live. If we neglect you, our inaction will kill you. If we care for you, plants or animals must die. Do you understand?”

“Of course. The defective one,” it gesticulated at Nenadi, “woke me up too early, broke my stasis pod, and now, I suppose, I’m doomed to live out my days in the land of the giant clay women. Without food.”

“You have exiled us from God’s garden,” Anahah spoke, not to the animal, but to Nenadi, “before we even finished creating it. Because of you, we’re ... sinners.”

The animal laughed at Anahah. “Sinners? Listen to that, you’ve evolved a theology. But you’re our creations. Bipedal, like us, with opposable thumbs to manipulate objects. Social, too. For collaboration. We couldn’t risk conflict, or deviation from the cause. So, a sense of purpose. We gave you,” it smiled, “God.”

Anahah turned away from Nenadi. She wept. Her skin trembled with emotion, blurring her sensory circuits and giving her respite from input.

“You’re self-recycling every twelve years, right, per the protocol?” the human remarked, to no one in particular. “Still populating from the original template? Maybe translational error …”

“We feel God. We obey God’s call,” Dinrah replied. Nenadi could hear her anger even if the animal could not. “To be clear, there are others like you? The humans that caused ... this ... will awaken once we complete our task?”

“Of course, that’s why we made you.” It jerked a thumb back to point at Nenadi. “You might want to throw the deviant one in the compactor early. You know what it asked me? ‘Why do I lo—’”

Nenadi could not let it betray her. She lashed out, gripped the human by the neck. Bones broke, with a sound like porcelain.

Behind a small dark door, Nenadi waited. Her people had never needed a prison, until now. The dim chamber still encapsulated the human animal’s musk. Light, limning the door, inscribed the sensory circuits on her hands with gold.

Nenadi compared what she was against what she had made herself into.

Anahah opened the door and stepped back, releasing Nenadi into the laboratory they had once shared as partners-in-all-things. Dinrah stood near a scarred work table and rolled a brand through a blue-hot flame. The scent of hot metal assaulted the air.

“No.” Nenadi decided to use an English word. It was more precise. “I murdered it.”

“You are an abomination,” Anahah said.

Outside, the dust storm had greatened. Work teams strove faithfully in spite of the low visibility to dig out river banks for watershed restoration. Their glazed bodies shone through the dim red light like beacons.

“You are no longer a golem.” Dinrah examined the brand gone white with heat. “You were never a golem. Unlike the people, you cannot hear God. You cannot feel God.”

Nenadi bowed her head in acknowledgment, for she knew Dinrah’s words as truth.

“You are condemned to wander the Earth,” Dinrah said, “never to remake yourself into a new generation. No one birthed from the kilns will bear your name. You and your line are lost.”

Dinrah handed Anahah the brand. Nenadi knew what to do. For once, she did not have to guess God’s will. She knelt.

Yet even as agony seared through Nenadi’s sensory circuits, peace blossomed—

Humanity had many more arks. Nenadi had all the time, and a world.

Copyright © 2016 Langley Hyde. Originally published in Terraform. Reprinted with permission of the author.

A clay-backed face. Roman votive offering. Wellcome Library, London, Creative Commons BY 4.0. Image has been slightly processed and given a different background.

Currently, Langley Hyde lives in the Pacific Northwest along with her partner, two children, and elderly cat.