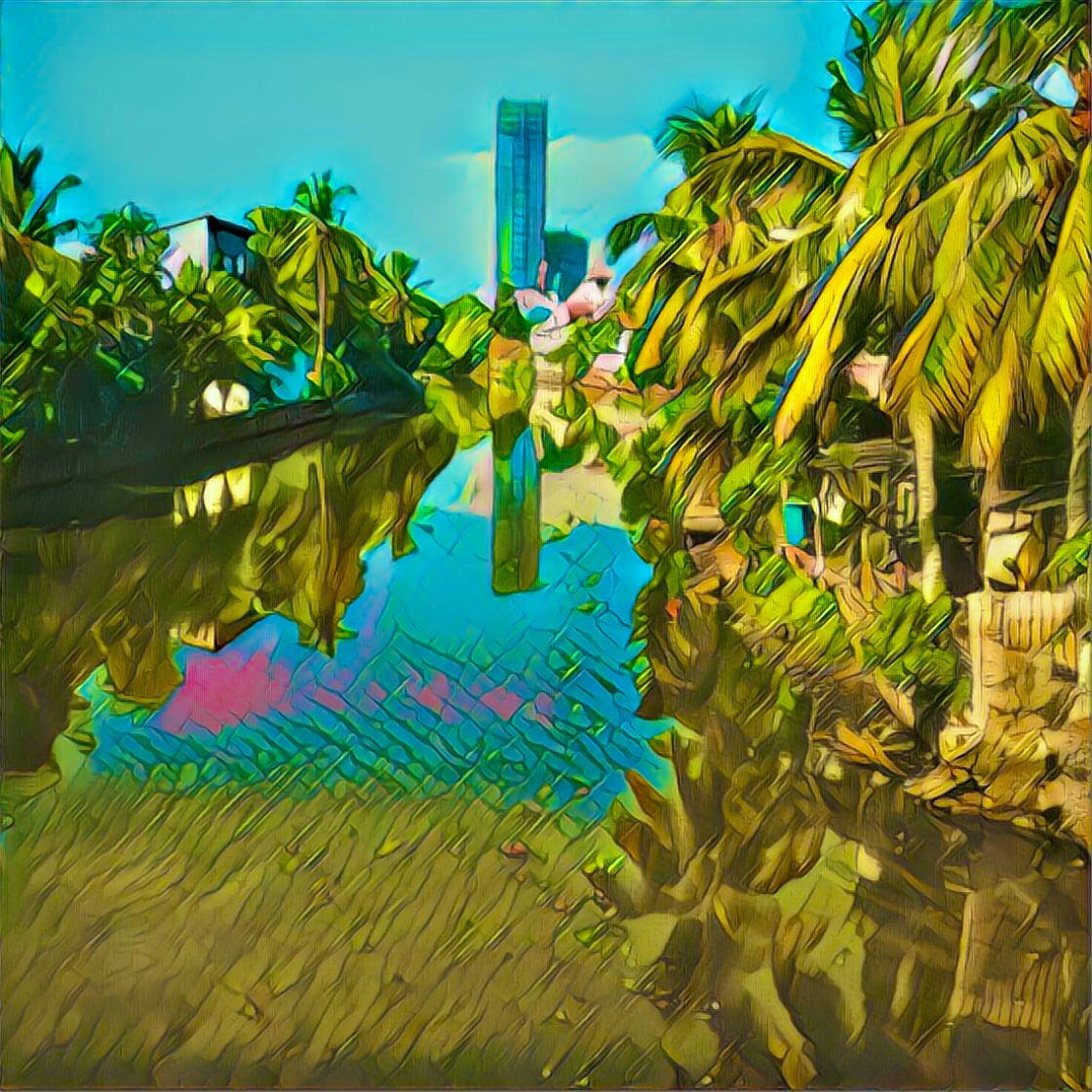 The Streets Turned Blue and Green

“The whole neighbourhood is abandoned.” Aleyah adjusted her hijab and grinned at her two friends. “Literally.”

They dangled their legs from the edge of the floating school. At this time of day, the great Neo-Mahaweli River surged through Colombo, its tides raised by the drainage canals and influx from the mangrove belt.

“Nobody cleaned it out? What happened?” Nejuni seemed skeptical of Aleyah’s claim, as did Chandrani.

“Well, the army cleaned it out after the flooding became too bad to handle, but they overlook things, no? I bet there is something left to find.”

The sun glittered on the fortified island of the distant port city, way out in the mangroves. Winding aquaponics gave the high-rises an almost organic silhouette, and Aleyah wondered for a second what life up there had to be like.

“Let’s go.” Chandrani smiled and showed the white of her teeth. “I want to see this.”

Aleyah, Nejuni, and Chandrani passed the expanse of Beira Lake with its swimming gardens, community centres, and criss-crossing walkways. The water level was sinking again, and city cleaners in their orange vests scrubbed algae from the exposed walls.

The air smelled of salt and fish, and the three girls maneuvered around buzzing mosquito swarms. They snaked their boat through the midday traffic of barges and passenger gondolas, then followed narrow tributaries until they reached their destination.

“We have to be quiet and lie low.” Aleyah got off first. “There are cameras surrounding the area, and the city might be watching.”

One after the other, they climbed a low dam and slid down the other side. Ancient stairs crawled along it, and their moss muffled all steps.

“This is it. People used to live here, over fifty years ago, even before they tamed the Neo-Mahaweli.”

The group trudged through soaked asphalt and mud like divers over the ocean floor. The modern parts of the city soared up in cliffs around the old neighbourhood and transformed it into a valley of shadows.

“Why are there so many of these things?”

Car cadavers rotted in the marshland between the buildings, their hulls creaking in the sun. Motorbikes stacked up in great heaps, and the skeletons of three-wheelers lay where they fell.

“They used to fill the city before the streets turned blue and green. Grandfather showed me some clips where they crowded everything. He said back then, people couldn’t walk and couldn’t breathe.”

Chandrani nodded. “Amma told me the same. Her parents were among the first to have their home connected to the hub. It’s on the green heritage trail now, right behind the western boat market.”

They explored further into the old neighbourhood and tried to decipher overgrown street signs. One building rose over the surrounding houses, and they came to a standstill in front.

“Let’s go in?” Aleyah looked at Nejuni, and Nejuni looked at Chandrani.

The structure had been a warehouse once, a Vietnamese restaurant in its second life, finally a living space for refugees from the Dry Zone.

“Wow. Take a look at this, Chandrani. Can you even read this? It's all in Tamil.”

The building's history was everywhere: in the colourful pictures put on the walls by children’s hands, in the wiring and pipework of a commercial kitchen, in the high windows and loading hatches long welded shut.

“They wrote down and illustrated their journeys.” Chandrani followed the elegant letters with her finger. “They came here in the mid-2050s.”

Like visitors to a cave gallery of prehistoric art, Aleyah, Nejuni, and Chandrani walked along the drawings and got lost in their stories: of droughts and vanishing lakes, coconut trees withering under the heat, and hills coming alive in sudden rainfall. It was easy to imagine the people behind them, sheltered by a city rapidly adapting to the changing climate.

“What is the time?” Aleyah froze. “The tide is coming back in, we have to go!”

All three of them exchanged a glance and rushed toward the exit. What did the teachers imprint on them in school? Never forget the tides, always stay above the water!

“No, no, no.” Aleyah rattled at the blocked doors. The tide had already come and pressed the doors shut from outside, licking underneath with salty tongues.

“We are trapped. Is there no other way out?”

Aleyah and the others scattered and ran through rubble and puddles, scanned the walls, and followed pillars of dusk-light. Through the windows, they could see a distant afterglow as the city’s solar lamps flickered on, but they were far too high to reach.

“What do we do? How do we get back?” Nejuni tried to retreat from the ankle-high water. “I don't want to drown.”

“Neither do we.” The tides lapped against Aleyah's legs. “I have never heard of someone actually drowning.”

A siren blared through the air, its voice distorted and brassy. “Please leave the area.”

“You are not safe here.” The city seemed to sense that something wasn’t right, and its tone was pleading, not authoritative.

“We are trapped! We can’t get out.” More water trickled in through the porous walls, rivulets that soon swelled to torrents.

“Please leave the area.” The city seemed sympathetic but unable to grasp the problem. “You are in danger.”

“Help us!” Chandrani’s bhindi glistened like a tiny wound on her forehead. “We need help.”

The water had reached their hips and would only continue to come, as the ocean's wave pushed in through the mangroves and the old canals still hidden underneath the promenades and lawns.

With a shattering noise, the high windows burst inward in squalls of glass. Light flooded in through the open frames, and Aleyah looked up to see whirring rotors.

“Please hold on to the ropes and hook your belts.” Rescue drones floated in, each of them large enough to carry a full-grown adult. “No harm will come to you.”

Colombo Canal by Dennis Mombauer. Image has been processed and filtered. 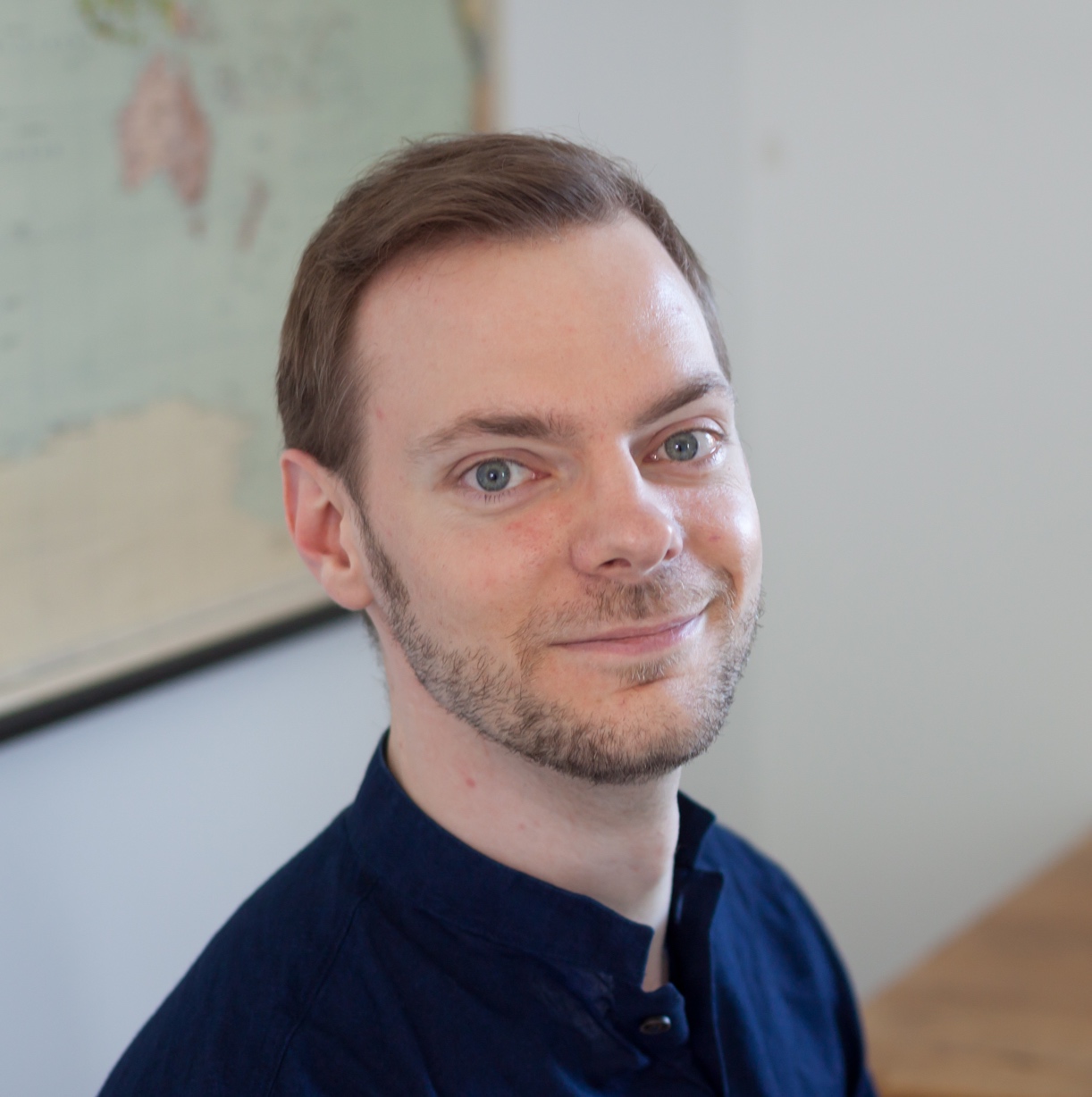 Dennis Mombauer, *1984, currently lives in Colombo as a freelance writer of fiction, textual experiments, reviews, and essays on climate change and education. He is co-publisher of "Die Novelle - Magazine for Experimentalism". He has publications in various magazines & anthologies, and a German novel publication "Das Maskenhandwerk" (The Mask Trade) with AAVAA press in 2017.