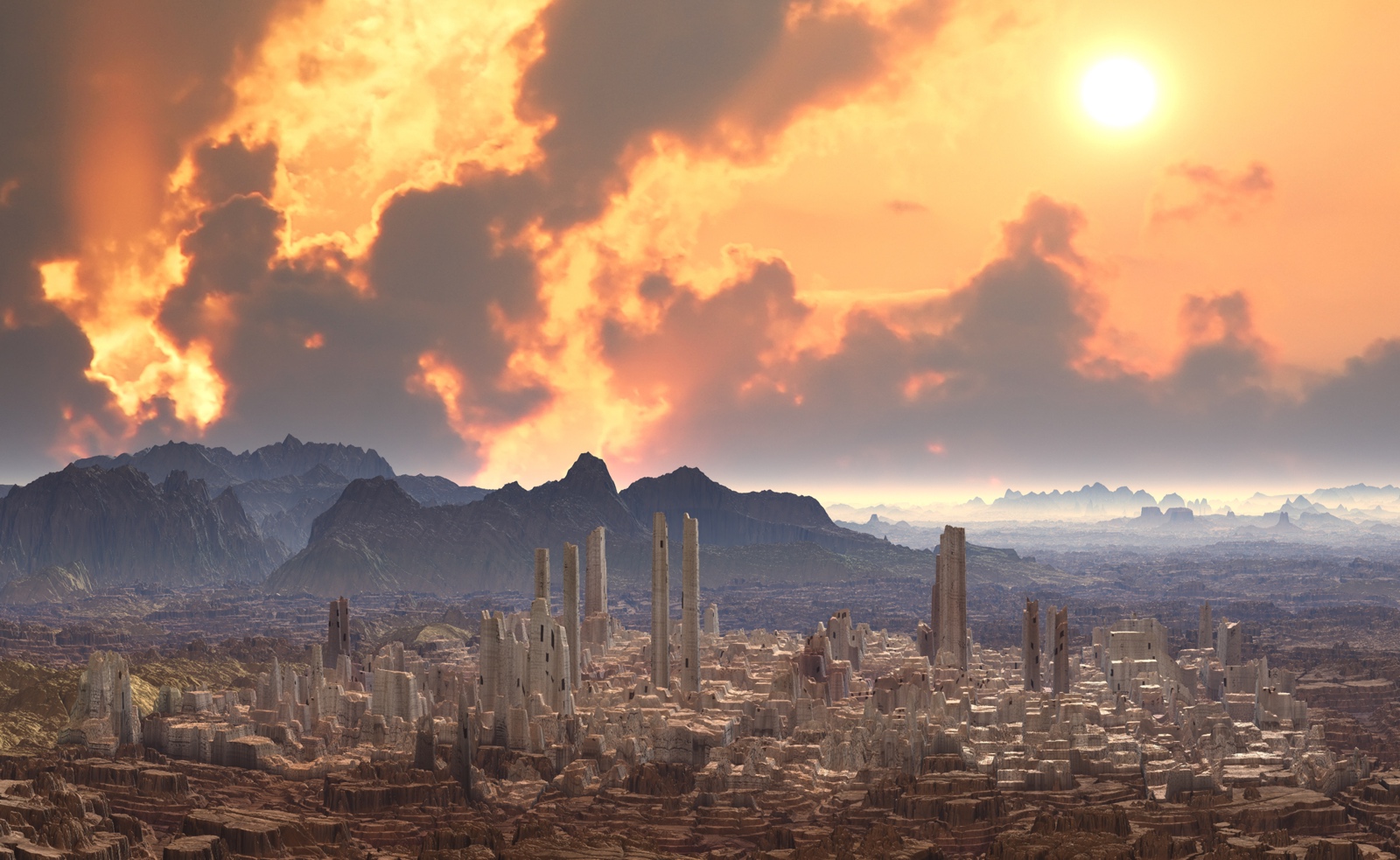 The City We Built in Life

Julie’s face was taken over by a big grin as she unfolded the map. Navigator for the day, the eight-year-old had the honour of sitting up front. Mom and Adam sat in the back. Still early morning, the family had just checked out of their hotel in Flagstaff. “Dad was so right,” Julie yelled back to her mom. “Seeing the Grand Canyon yesterday was so much better than just pictures!”

Returning her attention to the map, Julie put her finger on Flagstaff and traced the day’s route. Just south of Winslow were the Seven Wonders of the Ancient World. Holbrook had the Monuments of Washington, D.C. Just east of St. Johns was their final destination: the Silent City.

“Come on Dad!” Julie called out through a crack in the window. “We gotta get going!”

Mom looked up from the family’s guidebook. “Close the window, Julie. The batteries take a little longer to charge in the winter.”

Dad took the driver’s seat five minutes later, a broad smile on his face to match his daughter’s. “Okay, Navigator Julie, which way?”

“East on the freeway!”

The late January morning was bright and cold, and the side of the freeway was marked with piles of dirty slush. Within minutes the family exited the Flagstaff suburbs. All around them was pristine desert.

"It's gorgeous out here." Mom took a picture with her phone. "Nothing like East L.A.”

“Kids, you should be happy we could get you out of school.” Dad sipped his chicory. “Not everybody had a granddad who helped build the Silent City.”

“My friend Vic does,” Adam said. He was twelve. “Vic’s granddad’s ninety-five, but he still remembers. Came to my class last year to tell us all about it.”

“It’s just too bad they don’t do the overnight field trips anymore.” Dad frowned, but just a little. “When I was your age every class made the trip. It was like a pilgrimage.”

“What’s a pilgrimage?” Julie looked up from the map.

“It’s an important trip to a special place,” Mom explained. “Like the trip we’re taking this week. The Grand Canyon is a really special place. So is the Silent City.”

An hour later the family arrived at the Seven Wonders of the Ancient World. From the central parking lot, each Wonder was a quarter-mile in a different direction. Adam got his way—they had to see the pyramid first.

“The Great Pyramid of Giza was the first of the Seven Wonders constructed in the mid-2050s.” Mom read from the guidebook as the family made the short walk in their heavy coats. “Built from 2.3 million blocks of synthetic carbonized basalt, it represents what the pyramid looked like in pristine condition.”

“Syn ...” Julie struggled with the word.

“Synthetic ... carbonized ... basalt.” Dad said the words very slowly. “It’s the same special rock the Silent City’s made of. You see, there were so many blocks left over that they let artists choose what to build next. The Seven Wonders and all the other special places on your map are made from those blocks.”

Adam rubbed the pyramid’s smooth surface. “Too bad it’s not like the one in Egypt. I really wanted to climb it.”

“I don’t think they’d let you do that.” Mom pointed to two uniformed park employees standing near the path.

The family spent the rest of the morning exploring the Seven Wonders. After much prodding from his mother, Adam agreed to take a picture with Julie. Squeezing together on Nebuchadnezzar II’s throne in the Hanging Gardens of Babylon, the siblings gave Mom toothy grins for the camera.

The family ate lunch at a diner in Holbrook. Dessert was a rare treat: a piece of real chocolate cake.

“You spoil them, you know?” Mom cut up the thin slice into four equal portions.

“Might as well.” Dad passed out the plates. “We never got to eat this stuff when we were their age.”

Julie carefully lifted the bite of cake to her mouth. Closing her eyes, she let it melt on her tongue.

The taste was love and hope and happiness.

After lunch, the family continued to the Monuments of Washington, D.C. Julie spent the entire drive mastering how to pronounce "synthetic carbonized basalt."

“Dad, make her stop saying it!” Adam jumped out of the car the moment it stopped in the parking lot.

“Leave your poor brother alone.” Dad took Julie in a big hug and spun her around. She squealed in delight. “Race around the Washington Monument?”

A little later they stood inside the Lincoln Memorial. Julie put her small hand on Lincoln’s foot. “Is the real Mr. Lincoln still there, Daddy?”

“Well, yeah, but the water’s about up to there.” Dad pointed to Lincoln’s chest. “You’d need a boat to go see him.” Julie frowned. “It’s okay, honey. Just the other day there was something interesting on the news. The man said that by the time you’re my age, people will be able to walk to Mr. Lincoln again!”

“Maybe her great-great-grandchildren will," Mom whispered to Dad before raising her voice. “Adam, get off Lincoln’s lap! I don’t want us to get kicked out of here!”

It was late afternoon when the family set off for the Silent City. Dad exited the freeway, and the road became two narrow lanes.

“Nobody lives out here.” Julie tapped on the window with her fingertips.

Dad took a deep breath. “That’s why it was perfect for the Silent City. I don’t think Grandpa ever thought that people would want to come see it, though.” He smiled to himself.

Still twenty minutes away, the Silent City started to grow out of the horizon. Julie immediately perked up in her seat. At first, it was like looking at Los Angeles from the hills: rows of buildings extending for miles. Yet all of these buildings were the color of heavy rainclouds, all the same shape but different heights. The shortest was about ten stories. The tallest was about fifty. There were no windows or lights. Everything was stone. Everything was lifeless.

At the entrance, Dad showed his ID to the park ranger. “We have a reservation up at the hotel.”

The park ranger taped a shiny sticker to the inside of the car window. “Enjoy your stay, sir.” He even waved at Julie as the family drove off.

Julie pressed her face against the window. “It’s like A Christmas Carol,” she whispered.

“What’s that?” Mom asked. Every year on Christmas Eve she read aloud the old tale.

“It’s like the city in the story. Dark and scary. You think Marley and all the other bad ghosts live here?”

Dad followed the signs to the hotel, and they arrived in the parking lot just before sunset. “Bundle up, kids. At night it’s even colder here than in the desert.”

The hotel took up the first floor of one of the dark grey buildings. There were no windows or signs, just a modest door that led into the lobby. Their room for the night was spartan but comfortable. The food at the hotel restaurant was simple but filling.

“Early to bed tonight, you guys," Dad said as they got up from the dinner table. “Tomorrow we’re getting up before dawn to see the first block.”

Adam groaned. “Why so early?”

“Sunrise is the best time to see it.”

The next morning Julie was ready to go the moment Dad got out of bed. Adam took a bit longer, hiding under the covers until Julie tore them off. Mom took forever, as she insisted on dressing her children in every piece of winter clothing she had packed.

“Out to see the first block?” The hotel manager had a knowing smile on his wrinkled face as the family entered the lobby.

“It should be all yours this morning. Tomorrow night a hundred folks from Phoenix will be up here. One of those new religions. I think they’re going to pray to it.”

Dad and the hotel manager chuckled.

Outside it was freezing and blustery, yet the morning twilight promised dawn and warmth. Dad led the way. “It’s not too far. Just one building away.”

The walk took five minutes. At the end of it was a large clearing, a break in the Silent City’s endless pattern. In the center was the first block.

The block was a perfect cube a foot taller than Dad. It didn’t look any different from the innumerable others that made up the Silent City, the Monuments of Washington, D.C., and the Seven Wonders of the Ancient World.

On one side of the block was an engraved message. It read:

This is the first block of synthetic carbonized basalt to trap one ton of atmospheric carbon.

Mom rubbed the back of Julie’s head. “You see, Julie, when Grandpa was your age, it was a scary time. People had put a lot of bad stuff in the sky. They couldn’t see it, but it was hurting everyone. Then someone figured out how to suck it all out, just like our vacuum cleaner at home. The Silent City is all that bad stuff, but it can’t hurt us anymore.”

“But the real Mr. Lincoln,” Julie stammered, furrowing her brow. “Then why ...”

Dad put his hands on Julie’s shoulders. “Remember yesterday when Mommy was talking about how many blocks are in the Silent City? All those big numbers? Now that we’re here, can you imagine all those blocks, all the ones around us, all the ones we’re standing on?”

Julie looked around. Morning’s first light shone through the Silent City’s thousands of nameless boulevards, streets, and alleys. Below her feet, level stone stretched on for eight miles in every direction.

Julie looked back at Dad and nodded slowly.

“That’s how many people.”

Dad wiped Julie’s face with a tissue. “Come on. Let’s go.” The family briefly embraced before walking back to the hotel, where warmth and breakfast awaited them.

There would be time later to visit the museum underneath the Silent City, learn about the sins of the past and the price humanity paid. Yet, more importantly, there would be the gentle reassurances that despite everything, life was still precious, and worth defending.

Copyright © 2017 Thomas Broderick. Originally published in Scout as "A Monument to Our Biggest Sin." Reprinted with permission of the author. 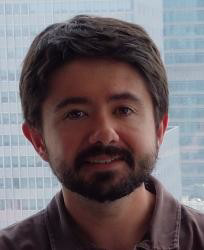 Thomas Broderick is a freelance writer living in the San Francisco Bay Area. His work has appeared in Nature Futures, Persistent Visions, and Shoreline of Infinity. He is a proud member of the Science Fiction & Fantasy Writers of America. He hopes to one day attend the Clarion Workshop. You can read more of Thomas's stories on his website: broderickwriter.com.