I Think That I Shall Never See
Stephen Kotowych
Fiction
January 13, 2023
Exiled Together: Faces of Contemporary New York
Marcus M. Tyler
Fiction
May 14, 2021
To the Havens
Ariel Bolton
Fiction
December 22, 2017
Chaser
Charlotte H. Lee
Fiction
July 13, 2018
Seedless
D. A. Xiaolin Spires
Fiction
June 14, 2019
What can we get you? 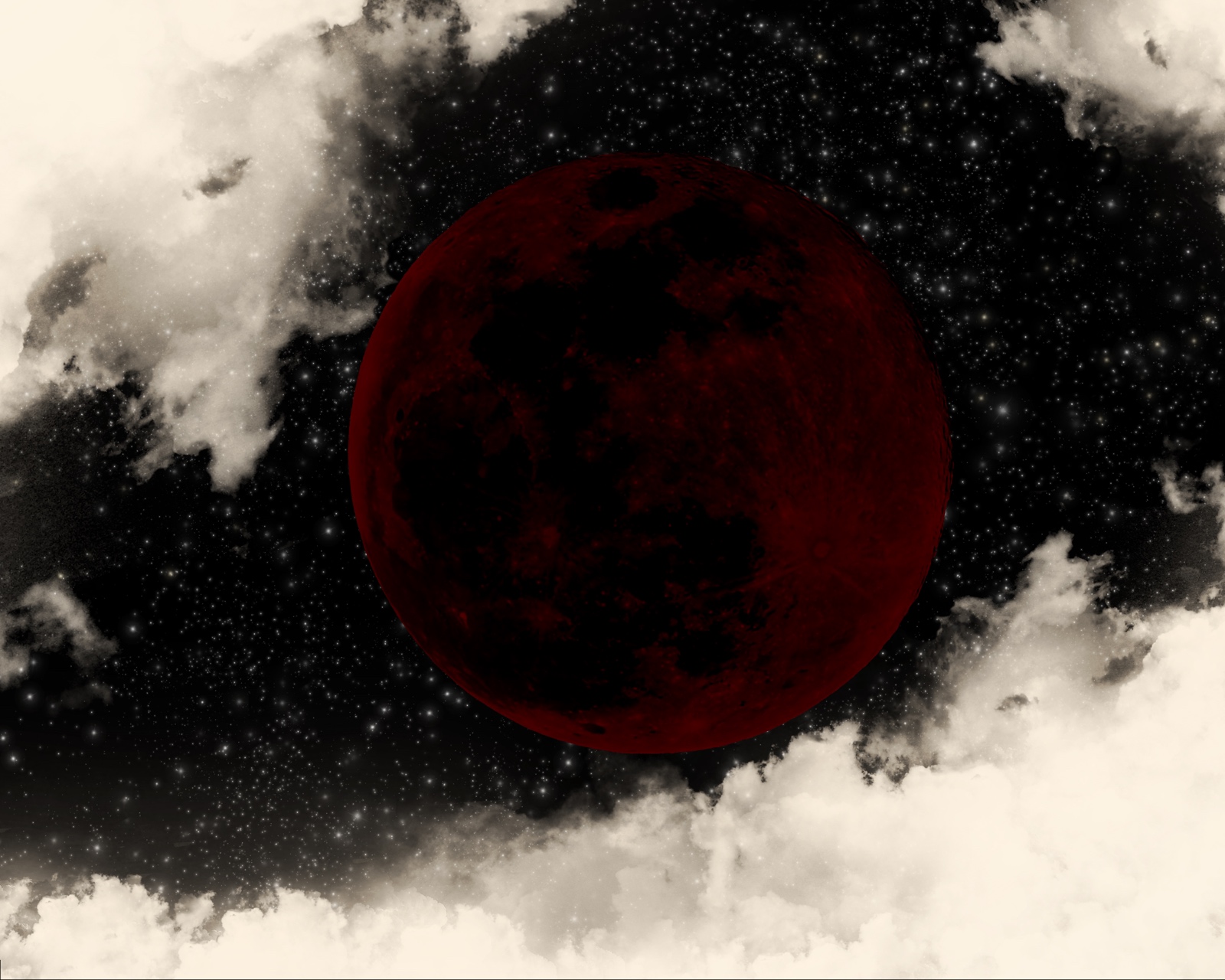 “Do you see it?” hissed Gramps, bony fingers digging into my shoulder.

“See what?” I said, trying to shrug him off.

I rolled my eyes. Everyone knew you couldn’t see the moon. Not anymore, anyway. Not without a special lens at the end of a telescope, the features picked out in flickering green, the next kid in line trying to push you out of the way. Even then you only got a good look on the clearest of nights, when the city light didn’t reflect back off the clouds, washing out the stars.

No one could see the moon with the naked eye. Least of all Gramps, who couldn’t read without glasses as thick as the old books he collected. Mostly, he used an app to read things for him. It was simpler that way.

I wondered if he was getting senile. Gramps was so ancient he says he remembers the moon before the Darkening. Says some nights it hung in the sky like a great white balloon.

I’ve seen the pictures. They’re not all that. How could they be when a full moon was 400,000 times dimmer than the sun, even before we tampered with it?

The Darkening is pretty much the first science lesson we get taught. The teachers come back to it every year, expanding on the problems the earth faced, drilling into us how it took the whole world to agree to change.

I guess it’s important to them.

It’s a bit of a bore though, the third or fourth time around.

Way back when everybody twigged that the issue wasn’t proving global warming—because that had very much already proved itself—that instead we had to do something about it, this Mexican woman—not even a scientist, a politician—broke it down as simply as it needed to be for everyone to finally understand.

The temperature of the surface of the earth—where we all lived—depended on three things, she said:

How much light came from the sun.

How much we reflected back.

And how much heat was generated on Earth.

Simple, right? Hard to believe people used to fight over it.

We couldn’t do much about the sun. It blazed away pretty steadily with only a small wobble over its eleven-year sunspot cycle.

The energy the earth generated was mostly low level radioactivity. Plus us. Burning forests—prehistoric or otherwise—generated heat, though it’s what that did to the atmosphere that really counted. The albedo (that’s a fancy term for the reflectivity of the earth) was how we got into trouble in the first place. Greenhouse gases decreased it: more of the sun’s light got trapped and so of course temperatures went up.

Back then, despite the warning signs that had been around for ages, the process was accelerating. Snow was bright and shiny and the rock or ocean hidden beneath was not. Ninety percent reflective, versus six percent. So as the glaciers and ice caps melted away, things got warmer still.

There was talk of painting the Alps white. Discussions of whether solar panels were actually a bad thing, since they were designed to absorb as much light as possible. Talk of putting up a great big shiny satellite to reflect some of the sun’s rays away, casting a shadow over a desert or maybe across the sea.

Then someone suggested darkening the moon.

It seemed crazy at the time. The moon, according to the scientists, was pretty dark already. Darker than Gramps says it was, anyway. It only reflected—and this is a number everyone knows, once they start school—twelve percent of the light of the sun, over its monthly phases.

Plus, it’s a long way from the earth. The boffins calculated that the moon gives out one ten-thousandth of the energy of the sun and most of that not even in visible light.

Though as NASA pointed out, if you really wanted a satellite to tinker with, why not use one that was already there?

As geoengineering projects go, it had one major advantage over the other crazy schemes that were being suggested: it wasn’t on Earth, so the cure wasn’t likely to be worse than the disease.

It’s not the only thing our parents and grandparents did. The last chunk of coal was burnt fifty years ago and they’ve been extracting carbon back from the atmosphere ever since.

A lot of it ended up on the moon.

The “painting” was simple enough. Just void the carbon dust into space around our lunar companion and the black particles would slowly rain down. I suppose we only needed to paint one side, but it turned out easier to do both.

Over a decade, so the teachers tell us, the moon faded away to nothing. From twelve percent down to a little less than one. Through the school telescope, you can see the occasional white splodge—the crater of a recent meteorite—but carbon is still raining down, so I guess the splodges will get softened back into the dark.

The moon was still there, tugging at the earth, creating the tides. Every so often things lined up just so and we’d get a solar eclipse. But you don’t see it before and you don’t see it after.

The scientific jury was still out as to whether it’d done much good, but it was a pretty powerful symbol at the time.

A bit less so, for anyone who grew up never having seen the moon. Or at least, not directly.

Gramps suddenly pointed up into the night sky. I’d been thinking about my homework, thinking how cold it was getting, thinking about whether my parents would let me stay up late because Gramps was here.

Where he was pointing, my eyes now used to the dark, there was a dim red glow. A blood-red penny in the sky.

He grinned, spun me around. In the dark, I couldn’t see his face, but I felt his warm breath on my cheek. “A lunar eclipse! The moon is sitting in the shadow of the earth. The sunlight is red because it’s going through our atmosphere, our polluted atmosphere. And the moon—the moon still reflects a little of the longer wavelengths.”

We stood and watched in awe until a cloud blocked the ghostly red light, until the house lights flicked back on and Mum called us in for cocoa and cookies.

At the kitchen table I bit a crescent from the pale oat circle, nibbled at it until it was only a thumbnail wide, glad to be warm, but thinking about that dark red disc.

Long term—much, much longer term than any politicians were thinking—the sun was gradually warming, as it fused hydrogen into helium. Growing fat in its old age, as well. Future scientists—who may or may not be human—might one day have to drag the earth a bit further away from its life-giving and life-taking rays.

I wonder if we’ll take the moon with us.

Katrina Archer composited from Blood Moon and Stars Through the Clouds, Depositphotos 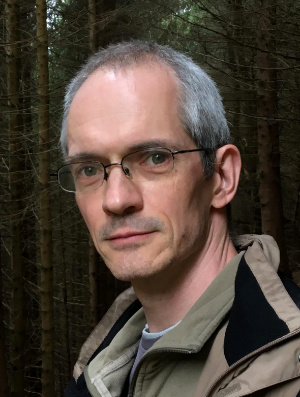 Liam Hogan is an award winning short story writer, with stories in Best of British Science Fiction 2016 & 2019, and Best of British Fantasy 2018 (NewCon Press). He’s been published by Analog, Daily Science Fiction, and Flame Tree Press, among others. He helps host Liars’ League London, volunteers at the creative writing charity Ministry of Stories, and lives and avoids work in London. More details at happyendingnotguaranteed.blogspot.co.uk.