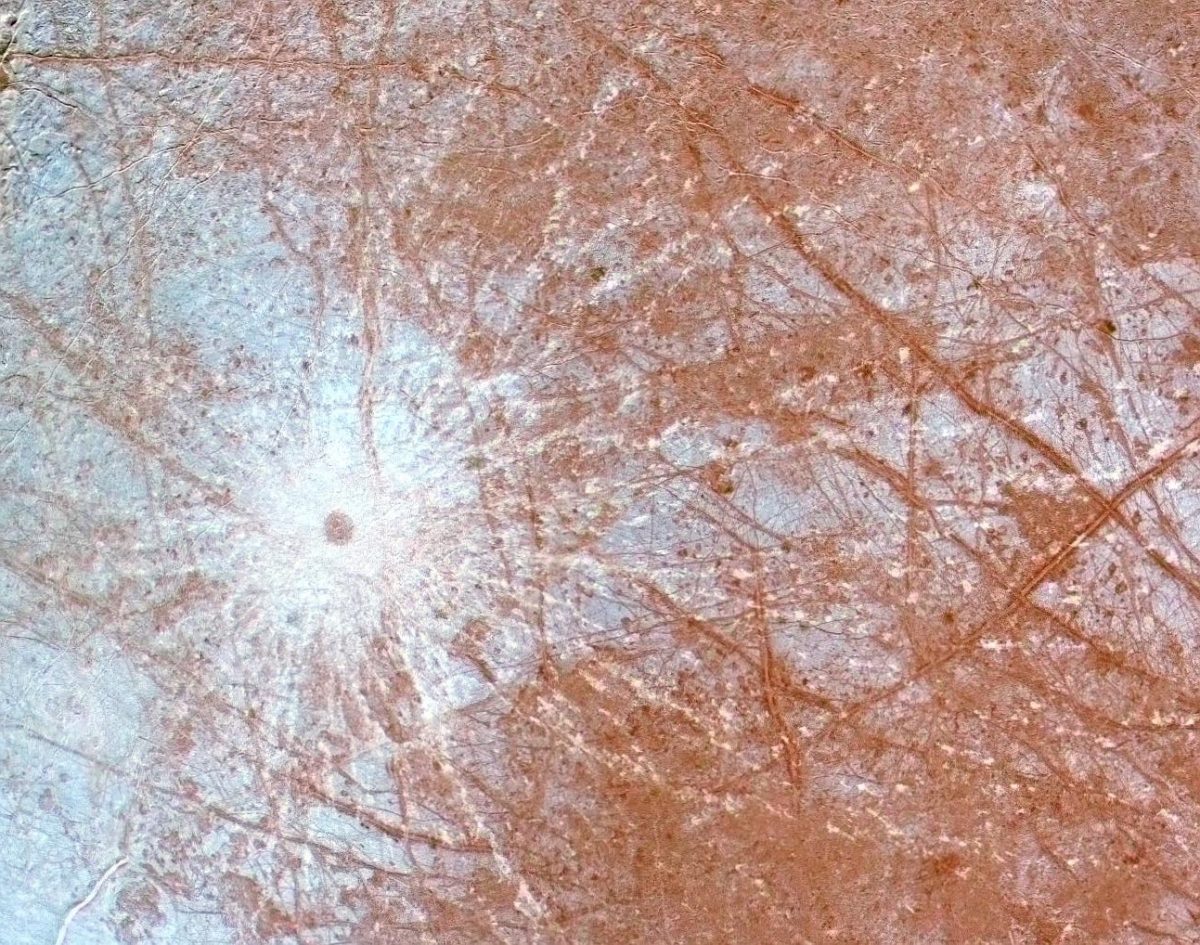 In the sea beneath Europa’s thick and jagged layer of ice, all colours faded to a blue that was almost black. There was no green, no white, no blood-red stain of life ill spent. Nothing to remind Yihan of what she’d lost.

She stayed as long as she could in the submersible’s remote interface, hunting out exotic microbes in the depths and shooting samples up to the surface, but each time she thought herself safe, the chirrup of the break timer sounded, bringing her back to Ling-Xian Station, four thousand metres above Europa’s icy crust.

One day, she told herself, it would be different. One day she would swim on forever, become a Europan globefish and hunt her regrets to extinction.

Yihan came awake with a gasp and a shiver. She had been dreaming of the seas again. Dreaming of freedom.

Bleary-eyed, she wiped the sweat from her body with a towel, stuck it back onto the suction valve on the station’s wall, then hooked one foot through a floor strap and tugged herself into a clean uniform. All this in the semidarkness of her room’s night-mode lighting.

After she was dressed, she turned to the interior bulkhead. “Wake,” she said, blinking as her eyes adjusted to day mode. “Scopes. Surface and external.”

The bulkhead flickered, then two separate feeds appeared on it, split down the centre by a line of the station’s usual hospital white.

The first showed Conamara Chaos—its cracks and ridges spreading out and away into the distance. This came from the lander below them, a survey device in its own right now that it had drilled down through the kilometres of ice and deployed the submersible into the waters beneath. The second was shot from a cam outside Ling-Xian Station and showed the moon itself, backlit by Jupiter’s ever-shifting clouds.

Yihan launched herself gently to the wall, brushed her hand against the ice of the Chaos. She did this every morning. It helped her to see what was down there, what she was swimming beneath.

Yuri and Asami were already in the commons module when she drifted through its doorway a few minutes later, Yuri eating rehydrated kelp-and-soy brats—a lunch Yihan wished wasn’t so familiar—while Asami sipped lukewarm chamomile tea through a straw.

Yihan couldn’t help but smile. If it wasn’t for her crewmates, she didn’t know how she’d survive out here so far from home. They were the only thing about Ling-Xian she could bring herself to like, for all that the station was her ticket to Europa and its seas.

“There’s a message for you on the ’caster,” Yuri continued in his thick Russian accent.

Of course there was. Yihan pulled a roll and a tube of coffee from the cabinet, took a deep breath, then let it out slowly as she popped the seal on the coffee. “I’ll check it later,” she said. “Thanks.”

The “morning” passed as usual: breakfast; three hours of resistance training (Asami joking with her for an hour of it before going off to bed with a half-heard “’Night.”); another towel bath and uniform change; the usual tests on samples shot up to the station from the lander to see if they might produce any useful antibiotics, followed by reports and status updates for Mission Control back home.

It was only at Yuri’s reminder over lunch (his dinner) that Yifan promised to check the ’caster before she went down to Europa.

What to say about the ’caster room?

When she first arrived on the station, she’d hung a cheap scroll on one wall that showed a girl drawing water in a bright bamboo forest. It was a parting gift from her mother—“So you never forget where we came from.”—but the contrast only made things worse.

She set it from her mind and powered up the ’caster. The device ran through its usual startup, its lights flickering into being before her, three-dimensional strands of twisting blue-white light the colour of Europan ice. Once that stabilized, she called up her message and the strands bent and danced to form the shape of Hesheng, her living daughter.

Hesheng with her innocent eyes, with the same trusting words as always: “We miss you, Mom. When will you come home?”

The question called up memories Yihan wanted to forget. Squalling twin daughters, years of sleepless nights as they grew older. Then, in primary school, the first signs of Xixi’s sickness. Endless visits to Hangzhou First People’s Hospital beneath the choking smog. Her mother’s sing-song voice reciting her own mother’s stories of the old days, when bamboo culms stretched, green and yellowish brown, into the clean blue sky above Anji’s mountains.

And other memories, even worse. The bone-sharp white of hospital walls. The stink of bile and vomit, and splashes of blood far redder than blood had any right to be.

She listened to the rest of the ’cast: stories of Hesheng’s friends at school—hard to believe she was already in secondary—of the latest round of rationing, of how they’d gone to visit Xixi’s grave despite a sandstorm, just her and her grandmother. That, at least, was something—that Mom was there with Hesheng.

Still, the guilt lingered, the shame she’d felt since defending her PhD in exomycology. Or since shortly after, anyway. She’d returned home, brimming with pride, to find her mother’s tears and news of Xixi’s death. The hospital, the blood. So much blood.

Under it all—the guilt, the shame, in Hangzhou and on Ling-Xian both—that sensation of pressure in her chest, of burning in her throat. The thought, relentless, that she should have done more. Should have been there for her daughter instead of working on her research. Or worked on it harder. Found new and exotic antibiotics without leaving the planet, so she could have cured Xixi in time.

She sent a reply to Hesheng, faking a smile, telling her daughter about a globefish she’d spotted the day before, about the latest advance Asami had made on Yuri, how he’d sputtered and blushed and set himself to spinning in the station’s microgravity before Asami had relented, laughing.

It was only after she powered down the ’caster that she pulled herself, hand over hand through the station’s microgravity, to the only solace she had left.

Back into the interface. Back below the Europan ice.

The ocean dim and silent, an endless shifting vista of murk beyond the circle of light where she swam, the patches of fluorescence from globefish on the hunt for prey lending such a depth to the scene that she could give herself over to the alien seascape fully, forgetting she was not truly there.

She swam for hours, watching tubeworms shrink away from her light, chasing schools of swallowfish as they darted through the periphery of her vision.

Occasionally she came across a fungal colony half-buried in the slush of the ocean floor, and the remote submersible’s interface broke the illusion with a quiet chirrup as she pierced each colony as quickly as she could with the needle-like sample retriever and moved on.

Most of all, she did not think about her daughters.

The plant life on the ocean floor swayed and bent, a miniature bamboo forest in a breeze made of dark blue water. Somewhere in these undersea reaches there was an answer. There had to be.

Minutes, hours in the forgetfulness of Europa before the chirrup of the interface returned her to the station. The days blending into one another in a bustle of resistance training and sweat, of kelp-and-soy brats and coffee tubes and tests and reports for Mission Control.

Yuri left, his replacement a Scottish woman named Fiona who made Asami as flustered as she’d made Yuri.

Life went on among the living, in other words, and below them the ice of Europa shifted endlessly, implacable, as old as life itself.

One day Yihan got a ’cast from her mother.

“Yihan,” her mother’s image said. “I know you hurt. I hurt, too; Every time Hesheng ’casts you I sit here and I watch. I’m happy you still have that wall scroll, but when will you forgive yourself for not being there at the end? When will you come back to us?”

There were lines under her mother’s eyes, a tightness to the skin on her forehead Yihan did not remember seeing there before. How many months had it been since she came here? A year? More? What other things had she missed?

“I’m going to Anji,” her mother continued. “I know it’s nothing more than sand now. Hesheng does too, in spite of my stories. They studied the Great Desertification in school last month. But I want to see where my mother lived. Where we could have lived, if we hadn’t been born too late.

“I’ve saved enough for Hesheng to stay here until she’s old enough to leave.” A pause, then, her mother’s image looking off to one side. “I’m dying, Yihan,” she said at last, her voice little more than a whisper. “It’s not tuberculosis, but I’m dying all the same.”

Yihan turned off the ’caster, hands trembling. From her spot on the wall, the girl on the scroll smiled with the innocence of youth, caught forever in the act of pulling up a pail of water from a river running through a faded bamboo forest.

That night, Yihan couldn’t sleep. Strapped against the bed’s hard surface, she tossed and turned for hours.

“Scopes,” she whispered at last. “Surface.”

She lay there staring at Conamara Chaos’s bleak beauty until, at last, she drifted off.

Mercifully, she didn’t remember her dreams.

The next morning, the ’caster had another message, this one from Hesheng.

“Mom,” her daughter said, her eyes swollen, ugly in grief. “Grandma’s going to Anji. She says the air there’s so clean you can live in the open, listening to the bamboo creak in the wind. She says the birds fly by so close overhead you can touch them.”

“She’s lying, Mom. I know she is. She knows it herself.” Hesheng ran the back of one arm across her eyes, sniffled. “I’m scared.” Then, after a longer period of sniffling. “I’m sorry. I shouldn’t have sent this.”

And that was the end of the ’cast.

Yihan glanced up at the scroll her mother had given her, faded and peeling on Ling-Xian Station’s too-white wall. White as a hospital’s. She closed her eyes, imagined herself once more in the blue of the Europan ocean, then opened them again to take in Hesheng’s picture, so perfect in its miniaturization.

What was she doing?

How had she decided that the way to make things right was to travel out here? That her research would ever make up for her missing Xixi’s final moments?

There were some things you could never make up for.

But there were also some you could. Fingers trembling, Yihan reached out and brushed the outline of Hesheng’s cheek, then shut down the ’caster and launched herself into the commons to tell Asami and Fiona her decision. Someone else would have to hunt down exotic microbes in the icy Europan waters, because she was going home. 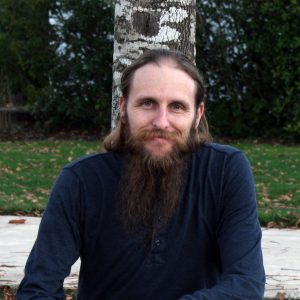 Stewart C Baker is an academic librarian, speculative fiction writer and poet, and the editor-in-chief of sub-Q Magazine. His fiction has appeared in Nature, Galaxy’s Edge, and Flash Fiction Online, among other places. Stewart was born in England, has lived in South Carolina, Japan, and California (in that order), and currently resides in Oregon with his family­­—although if anyone asks, he’ll usually say he’s from the Internet.