Civilizations
Tadayoshi Kohno
Fiction
May 28, 2021
The Month That the Rains Came
John F. McMullen
Poetry
August 13, 2021
For the wine industry, climate change could be the…
Lara Kristin Herndon
Agriculture | Climate | Features
December 18, 2017
A Sea of Plastic
Bo Balder
Fiction
April 29, 2022
Demeter Seeks Persephone in the Year 2210
Priya Chand
Fiction
July 29, 2022
What can we get you? 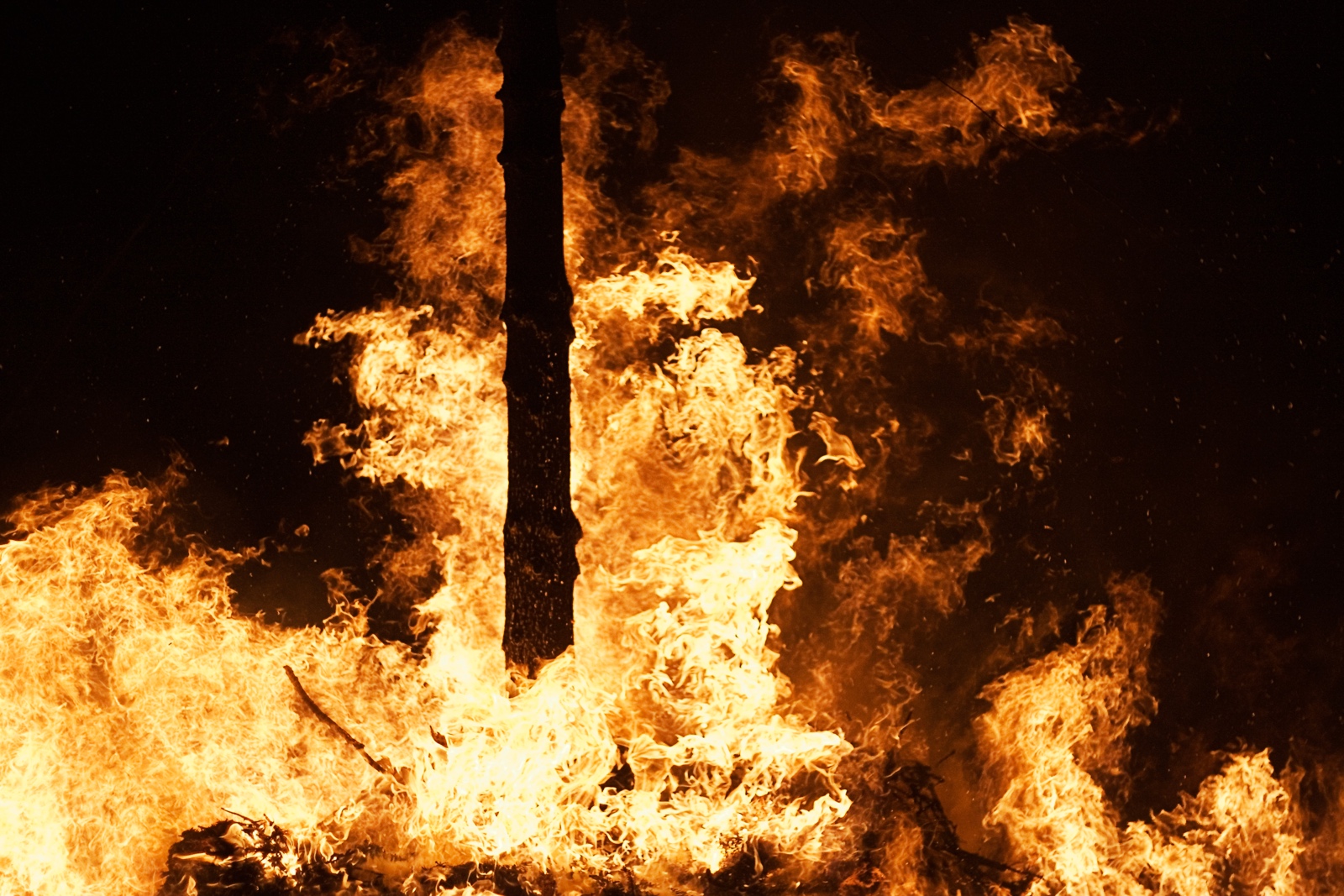 A thirty-foot wave of flame roars toward us over the grassy plain. We stand our ground. We were soldiers once.

Behind us loom the titans of California Redwood Emergency Preserve. Sequoia sempervirens. The world’s tallest trees. Their foliage trembles in the wind like frightened fingers. Our assignment is to keep them alive. In years past, that wasn’t hard: coast redwoods have insulating bark over a foot thick, making them highly resistant to typical wildfires.

Typical is not a word I’d use today.

I lean around the heat shield of our Humvee’s turret toward my second gunner, kneeling in the truck’s bed. “You ready, Em?”

She slaps her machine gun playfully, but her eyes are focused. She grew up here on the Redwood Coast. So did I. When our forces wrote off California, when they left to salvage what they could in Oregon and Washington, we stayed behind. For us, this is personal.

I shout at our driver. “Spud, punch it!”

Dust billows from our Humvee’s tires as it speeds along our forested bank. The river is all that stands between our redwoods and the approaching grass fire. The fuel break the water provides is not enough.

But it’s about to get wider.

Em and I pull our triggers simultaneously. Incendiary rounds stream from our gun barrels and over the river, the red tracers like lasers through fog. They burrow into the far bank’s crisp grass tinder and a thousand fires leap to life. For a moment it’s like a spring from my youth, a phantom of the golden poppy fields that once graced our state. The gold blooms coalesce into a snake of flame that sidewinds to meet the charging orange wave.

There’s a saying, that you can’t fight fire with fire. It’s nonsense. Dumping water on today’s infernos is like pissing on a house fire. These days fire is the only way to fight fire. And that’s what we’re doing: lighting a backburn to clear out all the grass in the main fire’s path, to starve it to death.

When you work with fire you start to see it as a living creature. Just a hungry animal with a life cycle not unlike ours. Fires are born, they eat, they grow, they die. They even breathe like us—inhaling oxygen, exhaling carbon dioxide. And a fire running as fast as this one can suck serious wind, gasping in a constant breath that pulls the ground-level air inward to replace its convective exhalation.

And that’s its weakness. That inflow wind pulls our backburn toward the oncoming wave, consuming all the fuel between them. When they meet, both fires will starve, wither, and die.

She’s right. Unless we speed up our backburn, the main fire will crash over it, hop the river, and devour the redwoods. Us, too, if we get pinched.

Far out in the grass, I spot a patch of fallen trees not fully consumed in previous fires. Once, this was all redwood forest. It took decades of drought for fire to finally gain a foothold here, but it arrived hungry: carbon that had taken the ancient forests millennia to capture was released back to the atmosphere in just a few seasons, initiating a feedback cycle that resulted in more warming, more lightning, more fires, and more overtime hours than I ever wanted.

But those downed trees on the plain didn’t fully burn in the last fire, and if I can get them to ignite again they’ll heat things up, help our backburn move faster. “Em, PIG!”

She hands me the propelled incendiary grenade launcher. I shoulder the weapon, pull the trigger. The PIG hisses like an angry cat as it speeds toward the fallen trees, exploding in a flash of white that drives back the shadow of overhead smoke. Flames scurry from the woodpile toward the main front, encouraging our trailing backburn to charge faster.

Fueled by the roiling air, a tornado of flame leaps from the oncoming front like an upright, angry serpent. It tears toward us through the grass, through our backburn, and into the charred area just across the river. The lower half of the whirl flickers from orange to black. I grin. Starved of fuel, it’s coughing, choking on the ash.

Then, in the hyperoxygenated, superheated vortex, the ash re-ignites. The revitalized serpent storms to the river’s edge, spits embers over the water. Firebrands drift down into the redwoods like an infernal snow. Em’s upturned, wide eyes glow with fear and firelight.

“Spud, heavy foot!” I flip my radio to air-to-ground two as our Humvee accelerates. “Firebird, this is Dragonslayer One, requesting immediate extraction. Over.”

As Spud tears along the riverbank, I look to the redwoods, to those titans who, having survived millennia of fire, now witness their age come to an end. Flames lick at their trunks like lustful tongues, then begin to climb the once-moist protective bark, desiccated after years of record heat and drought. I think of my childhood, of climbing that same bark, my fingers finding holds deep in their furrowed armour. Now, the titans writhe and groan in the roiling wind. Orange ascends to their foliage and the canopy explodes in a dance of flames, drunk on destruction as they leap from tree to tree.

Spud skids our truck under the hovering Chinook. Em and I connect the chopper’s hanging cables to our Humvee’s slings and then we’re airborne, swinging in the turbulence. I tell myself the world will go on, and it will. But my children will not know these trees as I did, and already that grieves me. With one hand on the truck’s frame, I lean over and squeeze Em’s shoulder. When she looks back, her welling eyes mirror the infernal dance below.

“I’m sorry,” I mouth over the throb of rotors, over the screams of immolating trees.

She turns away. There’s nothing left to say.

All we can do is watch four-hundred-foot flames devour the last stand of redwoods.

This story owes a large debt to work done by climate, forestry, and fire scientists. Special thanks to hotshot firefighter and US Marine Tony Alvarez for his feedback, and for providing the inspiration behind fire soldiers.

These images flashed into my mind years ago, when I read a paper in Science which documented that since the 1980’s, wildfire frequency in the American West has increased fourfold, the area burned has increased by a factor of six and a half, and the change is closely correlated with warming and earlier spring snowmelt. I had the thought (probably familiar to anyone who writes speculative fiction), “what might the future look like if this trend continues?” This story is that vision, with a little spice from some of the things I was lucky enough to witness during my years fighting fire. Firenado, for example, is not the title of a made-for-TV disaster flick, but an actual phenomenon. And firearms (albeit not nearly fun as the story’s PIG) are sometimes used to start backfires.

While the images were there years ago, I didn’t begin this story until I read a NASA-affiliated study finding a high probability of coming decades-long megadrought in the Southwestern US and Great Plains that could, in the words of a coauthor, “make the [previous] seem like quaint walks through the garden of Eden.” If the projections are accurate, it feels plausible that fire might overwhelm the coast redwood’s protective adaptations. It may be happening already: redwoods are increasingly susceptible to mortality by wildfire.

And if there are, as our protagonist suggests, critical thresholds where the biosphere stops buffering our emissions (e.g. by sequestering carbon in forests) and begins to amplify the effects of those emissions (e.g. by releasing that carbon in fires, resulting in more warming, more fire-starting lightning, and a positive feedback cycle), then the possibility of fire consuming our remaining redwood forests becomes a real concern. I wondered, if current climate trends continue, might we find ourselves waging war on natural processes to protect the things we treasure? In addition to stretched-thin fire soldiers, will we see defense forces for other natural phenomena, like flood fighters and hurricane hunters defending our coastal cities?

But I finished the story only after having a long conversation with a local politician who expressed a total lack of concern for climate change, even to the point of doubting that average global temperatures are increasing. He’s not alone: polling suggests climate change isn’t a priority for a majority of Americans. While I don’t usually like tragic endings, I wanted to convey the sense of the loss we’ll face if trends continue, not just for human life and property, as we’re seeing in California, but for our fellow lifeforms, species facing extraordinarily elevated extinction rates. It’s painful to look at the data and conclude that we’re responsible for these increasingly common tragedies, but they won’t stop if we deny our role so we can avoid the discomfort of acknowledging culpability.

Fire is not a villain. It is one of nature’s most beautiful displays, and can be valuable, even essential for species such as certain varieties of lodgepole pine, which actually rely on fire to open their cones and release their seeds. But fire is only beneficial when it occurs within the range of frequencies and intensities to which ecosystems are adapted.

Here’s to keeping it that way. 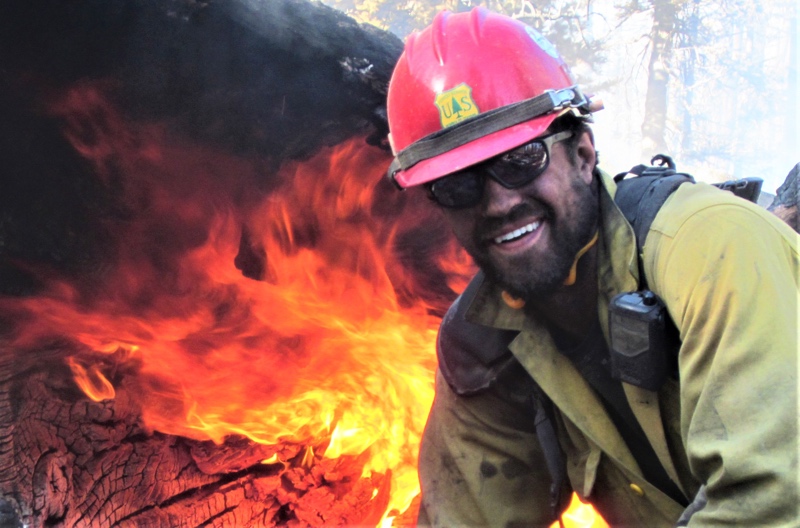 A former firefighter with two interagency hotshot crews, Christoph Weber is now a certified arborist, board member at the University of Nevada Arboretum, and guerrilla tree planter. His short fiction has appeared in Nature, Deep Magic, and VICE’s Terraform, was included on Tangent Online’s Recommended Reading List, and won the Writers of the Future Award. For more of Christoph’s work, and to stay apprised of his debut novel, Hangman, stop by christophweber.com.
Readers of the “Last Stand” have donated over $1,000 to help those displaced by California wildfires. To join in their generosity, please visit the California Fire Foundation.