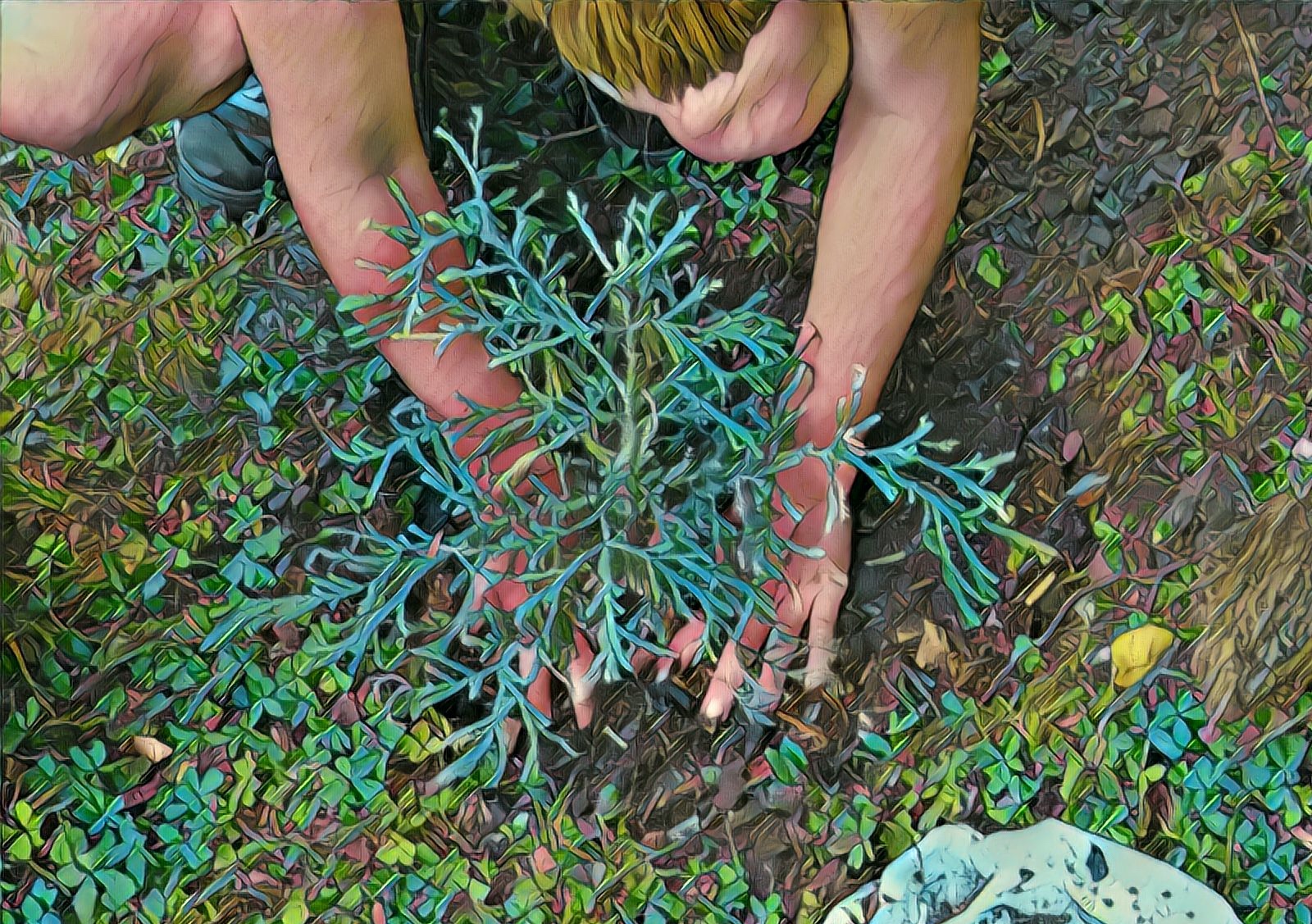 We were suffering through the hottest, thirstiest, cruelest season yet when the Pinecone Lady came through town. I’ve heard a lot of theories about her since then, about who she was or what she was, but those theories are all missing the point. I only care what she did—because what she did meant everything.

In the town where I grew up, we didn’t talk about summers and autumns anymore. There was just winter, spring, and fire season. Even at twelve years old, I knew that each fire season would be worse than the one before, and the green, easy summers before I was born existed only in my moms’ stories. On the hottest, windiest afternoons, when they cut the power to prevent fires, we sat on the porch sipping water and listening to our hand-crank radio, waiting for alerts, watching for signs of smoke. Those seasons turned towns with names like Paradise into a real-world hell.

This wasn’t one of the worst days, though. The fire risk was only high, not severe, so Mama let me ride my bike to Sequoia Park as long as I kept my phone and face-mask with me. This park was no more than a bit of scrubby grass and a few surviving trees squeezed between two half-empty strip malls, across the street from a wilting field of sugar beets. Even the newest genetically engineered crops were struggling with this hot, dry weather, my moms said. Fortunately, with the calm winds today, the rotting-compost smell of the sugar refinery outside town didn’t reach us.

I settled in to read a book under the biggest tree, a welcoming old oak, and that’s where she found me.

“That’s a nice tree you’ve got,” the stranger said. She stopped her bike at the side of the road, one foot on the curb to keep her balance.

I stretched so the bark scratched my back. “Thanks, but it’s not my tree. It’s my friend, and it lets me sit here to keep it company.”

I wasn’t sure why I said that last part, because that sort of thing made most adults look at me funny, or chuckle as if I was joking, but she grinned like I’d said something extra clever. “Why do you think it lets you?”

“It’s lonely, I think because it lost all its friends in the fire when I was little. So I think it likes having me around, even though I’m not a tree.”

She leaned her bike against a parking meter and came over to squat beside me in the shade. She was young for a grownup, and pretty, with light brown skin and long black hair that fell in waves down her back, but the thing I noticed most was her eyes: rich brown one moment, then green as the oak’s leaves the next. She looked at me and the tree like she saw things other people didn’t.

“That’s very wise of you,” she said. “Not all kids know how to listen to trees, and almost everyone forgets by the time they’re adults.”

“But not you?” I asked, because she didn’t seem to be teasing me.

“Not me. I think the very best thing we can do is be good friends to our trees. And you’re right about this one. Did you know that trees in a forest talk to each other? Not in words, but in chemical signals through their roots. They take care of each other, warning each other about weather and insect attacks and whatever else could hurt them. But when they lose their families, like these trees have … yes, I think they get lonely, in their own way.”

“Thank you!” She laughed. “You’ve heard of Johnny Appleseed? Well, you can call me the Pinecone Lady.”

“That’s not a real name!” I said, but she only shrugged. “My name’s Daphne. Where are you from?” She had an accent, like a familiar song I couldn’t quite recognize.

“Oh, I’m from here, there, and everywhere. I go where I’m needed. Wherever we’ve lost too many trees. Do you know how trees are connected to our weather, and our climate?”

“In school, we learned that fossil fuels made the climate change, but that cutting down all the trees made it worse. Because of …” My forehead wrinkled as I tried to remember. “Because of how they trap carbon dioxide.”

“Good! You know all about this. You’re exactly right. Trees are better at trapping carbon dioxide than any of the atmospheric scrubbers we’ve built. No human has figured out how to make something as wonderful as a tree. But cutting down trees pushed the climate over the edge, and I’m working to make it better.”

“It’s too late to make it better. It’ll only get worse.”

Everyone knew that. Every kid in my class had known it our whole lives: the world was on fire, and people gave up on putting it out a long time ago. We grew up waiting for it to cook us alive.

“What if it didn’t have to?”  She picked up a leaf from the ground, twirled the stem between her fingers. “Your friend here might like a say in the matter. What if we help it to help us?”

She grinned at me. “Can I show you something magical, Daphne?”

The Pinecone Lady was a stranger, technically, but she didn’t feel like one, and I really wanted very badly to know what she meant. I nodded hard.

She fetched a saddlebag from her bike and pulled out a handful of … stuff. There were pinecones, and acorns, and walnuts in their shells, and other things I didn’t recognize. They all looked like seeds. “This spot used to be a forest, you know. A century ago, most of the trees got cut down and turned into farmland. Now half the farmland’s been paved over, and most of the surviving trees have died or burned. But we can fix that. Let’s see, what to start with? How about a sequoia?”

“Not now, but they used to. Here, hold your hands.” She held up a fist-sized pinecone, which she pried and twisted apart with her fingers. Seeds like tiny light-coloured coffee beans rained into my hands. They felt like they might float away, fragile and precious as gold. I cupped my hands around them and followed her to a spot of broken pavement at the edge of the strip mall.

“Are you planting them? They’ll die here!”

“Nope, because we’re going to help them.” She cupped her hands around mine and blew on the seeds, and … they glowed. Even in the hot, sweaty sun, the seeds glowed like fallen stars. “There. Now plant one,” she whispered. “Give it some earth, and tell it to grow.”

“You talk to your friend, the oak tree, right?”

“It’s more the same than you think. You talk to trees, Daphne, and you listen to them. This is no different. Here.” She tucked one seed into a gaping crack in the pavement and hovered her hands over it, humming. “Help me,” she murmured. “Tell it to grow, to be strong and brave. Tell it we need it. Picture a whole forest for it to join.”

I squeezed my eyes shut, my free hand joining hers. I pictured the forest that used to live here, vast and shady and strong, a forest full of friends for my oak tree.

“A forest so vast it captures water and cools the ground and cleans the air. A forest big enough to wrap and cradle our whole planet, to nurture it and keep it safe …”

The image filled my mind, and even the sun felt cooler for a minute. And when she took her hands away …

There was a seedling. A tiny, delicate, perfect baby sequoia, stretching out its tiny baby branches covered in needles so fine they felt soft.

“We did it,” she said. “I figured out a long time ago that I could help trees grow, and I realized pretty quickly how important that was. Planting trees won’t fix our world when it’s so broken, but unless we bring back the trees, there’s no hope for any other solution. Trees could get us moving in the right direction, I thought, so I’ve planted them everywhere I can: here in California, and in Brazil, Indonesia, Cameroon, Canada … But I’m only one person. I can’t protect them all. If I plant a tree here today, it’s likely to dry up and die, or someone will come along and cut it down.”

“I was hoping you’d say that.” She grinned like a sunbeam, only kinder. “Everywhere I plant trees, I find someone to look after them. Usually a kid like you, who still remembers how to hear what trees need. If you’ll be a guardian for this tree and its sisters, if you’ll gather up their seeds and plant them and grow new ones the way I just showed you, and if thousands of other guardians I find around the world do the same, then the forests will come back, and the world might have a chance.”

“I’ll do it,” I said. Purpose tingled through me from head to toes, and I felt like I was glowing, just like the seeds. The old oak had been a good friend to me. I could be a good friend back.

All afternoon we planted sequoia seeds, in the park and along the road and in the broken pavement of abandoned lots. When I’d learned the trick of it, the Pinecone Lady said goodbye. She got back on her bike, and I raced to the middle of the empty road to watch her ride away—but by the time I got there, she was gone. She’d disappeared, as if she were never there at all.

But the seeds in my pocket stayed, and so did the trees we’d planted. By the next morning, the seedlings had grown two feet high. A week later, they were too high to see the top of. Soon, our trees shaded the park from the late summer sun. They took over abandoned farms. They grew up around the old strip mall, swallowing it up and delivering it back to the earth. They weren’t fully grown yet, but even a young sequoia was a big, big tree. Everywhere I went, trees shot toward the sky.

That was the start. The rains didn’t come back that year, or the year after, but eventually they did. Much later on, the scientists said it was the flourishing of trees, the restoration of the long-gone forests, that tipped us back into safety after we thought our planet was past the brink. And though folks like to pretend the Pinecone Lady is myth, I know better. For all these years, I’ve kept tending my trees just like she taught me. I keep on living that deepest, simplest truth: if we take good care of the forests, then they can take care of us.

Image by Hans Braxmeier from Pixabay, filtered by Prisma. 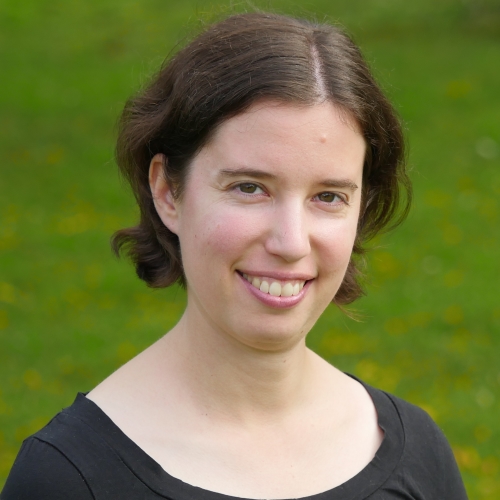 Jo Miles writes optimistic science fiction and fantasy, and her stories have appeared in Nature Futures, Analog, Diabolical Plots, and more. You can find her online at www.jomiles.com and on Twitter as @josmiles. She lives in Maryland, where she is owned by two cats.