Eileen stared at the dialog box. Such a little thing standing between her and an irrevocable act of destruction. Did she want to delete records, massive quantities of records painstakingly maintained by herself and the archivists who had preceded her? “OK” and “Cancel” didn’t seem like adequate choices. This was an essay question, not true or false.

For months, Eileen had combed through the digital records in her care. Images of rare books and manuscripts; scans of twentieth-century documents too delicate for routine handling; a six-linear-foot collection, digitized in its entirety courtesy of a monetary donation tied to the materials; the born-digital records of scientists, the historical significance of which might not be clear for decades.

So much material held in just one institution, and so little of it to be saved. So much material, so many servers, so much energy used on- and off-site.

S.O.S., they called it: “selection on steroids” and a professional cri de coeur. Eileen had made her decisions and then sabotaged routine backups, carefully excluding most of the archived materials in her care. She suppressed error warnings and held her breath waiting for an email from IT that never came.

Archivists’ power was distributed. That was usually a disadvantage, a barrier to institutional clout and collective bargaining, with precarious employment complicating community ties. But that left archivists widespread, working in many different public and private institutions. It also meant the cultivation of professional networks divorced from geography. That could translate to slacktivism—but sometimes it evolved into Slacktivism.

They’d all had training in distributed action, informal but high stakes. Crowdfunding to cover strangers’ medical expenses; donations to make professional conferences slightly more affordable for the most marginalized; outreach to communities ignored by or mistrustful of collecting institutions; hashtags to amplify and focus debate; desperate ad hoc, cross-disciplinary projects to save public climate data at risk of destruction by a hostile government.

Word of mouth, whisper networks, conference hallway tracks, shared documents with many editors: this was simply the way things worked. The way they shared knowledge, sorted individuals or institutions into categories of helpful or harmful, the way things got done.

Eileen had met some of her co-conspirators in person, through national and regional conferences, workshops, and the enduring ties binding former classmates and colleagues. But others remained avatars and author headshots, friends of friends bound together in a web of trust and professional unity.

She tried not to think of parallels to terrorist cells, though she suspected they’d soon hear that analysis. How else would media contextualize a massive loss of data? The coordinated deletions were clearly a plan—even without the accompanying manifesto, it would be obvious the event was no accident—and that made those responsible co-conspirators. They were doing the right thing, but she still couldn’t reconcile co-conspirator with her self-image.

Instead, Eileen thought of a years-old visualization, a network diagram identifying Paul Revere based upon social connections. Setting aside all the deeply problematic aspects of the American project and the mythology surrounding national identity, it comforted her to consider herself part of a revolutionary tradition rather than one of isolated groups dedicated to violence. Eileen contemplated the essays, posts, and comments to this effect primed to go live. She’d already seen a few of them floating around the web in advance, heartfelt and strategic.

Eileen had printed out a lot of personal documents. Paper was easy to take care of and (often) long-lasting, whereas bits were notoriously difficult to preserve, migrate, and access. Intellectually, she knew a picture of Sophie, age five, was safer in the frame on her desk than floating around the cloud as a JPG. Having the picture on her desk at work and at home made it unlikely that she would lose both, barring a regional natural disaster.

The sort of regional natural disaster that was becoming increasingly common, as hurricanes became more severe, sea levels rose, and continents burned. Sensible disaster protocols called for geographically dispersed electronic backups. But did it matter that one had technically done one’s fiduciary duty, if the collection fell victim to a flood in New Jersey and a wildfire in California?

Nowhere was safe, and it would only get worse. They’d already passed several points of no return, with so many aspects of twenty-first century life unsustainable. The average individual couldn’t exert a meaningful impact on the climate. A­­­­ focus on personal empowerment was one of the cleverest, most insidious lies of the Anthropocene.

The average individual couldn’t do much. Neither could a loosely-connected group of archivists. But they did what they could. That was, maybe, the most important aspect of this action: a tiny step taken in the right direction, a tiny cooling of some data centres. Maybe, a tiny way to hurt the powerful. Maybe, a tiny way to remind people what they were going to lose, to spur them to consider those losses, material and emotional. To spur them to prepare themselves for the future that could no longer be prevented.

Eileen deleted the contents of her social media accounts. Years’ worth of posts, comments, photos, and videos. Mementoes and memory-triggers, all gone from the web. All unavailable for amateur data mining. A copy existed, along with the electronic histories of everyone else involved in the action. Hard drives sat on a lawyer’s desk, who did not know the contents or the reason she was shortly going to earn her retainer. But no one who had deleted material planned to ever recover it for personal use. They were walking the walk.

A lot of social media was going to disappear—some of it permanently—and that might garner quick, widespread attention. But other companies would lose a lot of data, and there might be panicked knock-on effects. The economy would take a hit. Eileen felt sorry about that; the consequences would fall most heavily on those who could least afford it. But still, this was the right thing to do.

Being an archivist didn’t mean saving everything; it never had. The job was all about making choices. What to collect, who to collect it from, and how well to describe, preserve, and make it accessible. How long to retain it. Archivists always made those decisions within constraints: physical space and institutional mission and funding and headcount and a thousand other factors.

Eileen and her co-conspirators had just decided to (finally, belatedly) prioritize the climate impact of their digital data. It was not so different from deaccessioning materials outside of a collection’s scope ... except it felt entirely different. They wielded professional ethics unilaterally, not within defined institutional constraints.

She pasted in the new social media updates: agreed-upon verbiage, hashtags, and contact information for the press. For once, maybe news stories about archives would quote actual archivists. The posts included links to multiply-mirrored sites hosting the manifesto and detailed breakdowns of the data destroyed and the anticipated impact, economic and climatic.

The planet is burning. In some places, it is literally on fire.

With this action, we burn a piece of our past to save our future.

Eileen regretted never again being able to zoom in on that photo of Sophie, never again to add filters or colour correct the red-eye. But she had always regretted the precarity of her daughter’s future.

Some griefs were more compelling than others, and demanded action as well as mourning.

Composite by Katrina Archer via Depositphotos 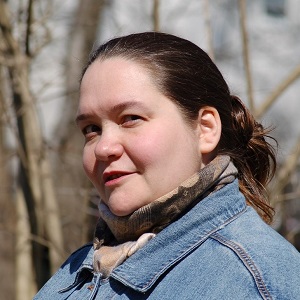 A. P. Howell has worked as an archivist, ice cream scooper, webmaster, and data wrangler. She lives with her spouse, their two kids, and a dog who hates groundhogs, close enough to Philadelphia to complain about SEPTA while enjoying an abundance of good cheesesteaks. Her short fiction has appeared in Daily Science Fiction, Eighteen: Stories of Mischief and Mayhem, and Community of Magic Pens, and she can be found online at aphowell.com.