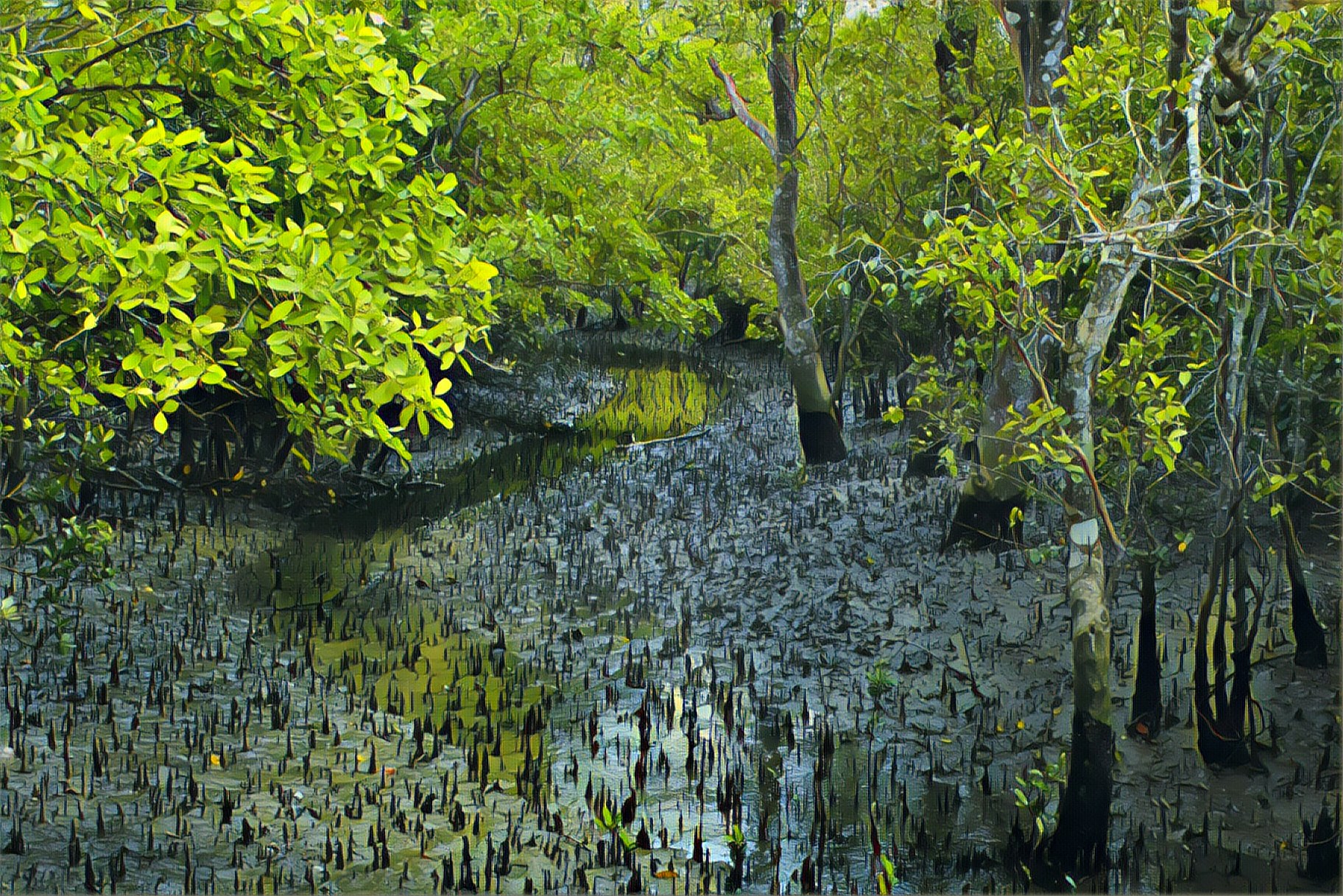 Rithika’s home was now two-storeyed, but Baba lived there alone most of the time, ever since she had moved out because of her job. She wished that she could spend more time with her father, in their home. She knew how lonely Baba was, even though he always encouraged her to go and pursue her goals.

“Do something to help, Rithi,” was what he always told her.

Now, as she stepped out of the auto and walked towards her home, she remembered her childhood, spent studying beneath the low-hanging bulb that lit their one-room house at night. She remembered her father coming back from work, sweaty and half-broken after a day of pulling rickshaws, but always with a smile on his tired face. Most of all, she remembered Baba’s stories. The stories of where they belonged, of the home of their ancestors. Sunderbans. Meaning “beautiful forest” in Bengali.

Baba’s first gift to her was a map. A map that had land where there were seas in the maps at school.

She had leaned closer, tracing the lines in the yellowed light.

“Baba, these places are not there in the maps at school!”

“Sunderbans.” Baba’s voice was quiet and haunted, and his fingers traced the paper over the land crisscrossed by rivers. “Before the mangroves disappeared, before the soil became too saline and the sea swallowed the land, that was where I lived.”

Mangroves. Sunderbans. They were new words, and the next day Rithika had looked them up on the internet in the school computer.

They opened up a new world for her, a world that showed her the past in a way she’d never seen before. The unique structures of the trees. The way they grew in saline water, the way they protected the land against the sea and the cyclones. She read the articles about their disappearance, read in cold black letters the news of the submerging of the largest delta in the world. That day she’d learnt that she was a refugee in her own country—a climate refugee.

This evening, as father and daughter sat down on the rocking chairs on their balcony, Rithika felt a pang of sadness as she looked at Baba’s weather-beaten face, at his sparse hair—now coloured silver.

His voice was rusty as he spoke.

Rithika sighed. “In two days’ time.” She leaned forward, took a deep breath and said what she’d been wanting to say the whole day.

“Baba, I want you to come with me this time.”

Kolkata—nicknamed “City of Joy”—was the city of Rithika’s childhood before the flooding became more consistent, more permanent. Before it took longer for the waters to recede, and some areas remained permanently submerged.

“The waters have followed me,” Baba used to say, trying to make light of the situation, but Rithika had read the worry and dread in his eyes.

Their house filled with water during the second consecutive year of the floods.

The two of them left the city, moving further inland, where the seas were no longer visible, where the air was no longer salty, where life was still a struggle.

The memories of the floods stayed with Rithika. She had wondered how much worse it must have been for Baba to see his home destroyed back when he was a young boy in the Sunderbans, to live with the knowledge that his childhood was forever submerged.

And that was when she knew what she was going to become when she grew up.

It took some convincing for Baba to get into the helicopter, but he agreed eventually, his hands tightly clasped in Rithika’s all the while.

She’d asked for permission to bring him as soon as she knew that she had to go for the inspection.

Now, they flew through the rain towards what had once been Kolkata. Most of the city lay submerged, and the parts that had survived were almost islands. College Street fought valiantly against the rising waters, its shops still full of books, although the shop owners had long abandoned the city. Rithika remembered frequenting the neighbourhood. She had fallen in love with this cramped place filled with noise and people and all the vibrant colours of endless books. The helipad was situated just a few metres away from the street now, and as they stepped outside the helicopter, Rithika saw that there were a few others already there for the inspection. She signalled to them that she’d be with them in a moment. She glanced back at her father, who was staring with wide eyes in front of him.

A few hundred metres away, the Bay of Bengal was visible, an expanse of rolling endless grey that merged with the sky.

Between the waters and College Street, rose rows and rows of endless trees.

“Not the real ones, Baba.” Rithika took a step forward too. She gently took hold of his hands and took a deep breath. “Remember the stories you used to tell me? About the trees of your childhood? We studied their structures. They’re long gone, but we used them to build these artificial ones, with aerial and underwater roots that break the waves and all. We’re working on improving them, trying to make them more efficient, so that they can also absorb floodwater—”

“Mangrove trees. My favourite was the Sundari tree.” Baba’s voice was dazed. “These trees—you built them yourself?”

“With the help of a few others.” Rithika spoke through the sudden lump in her throat. “Right now, the plan is to plant these synthetic ones along coasts and low-lying lands—”

“We failed to save them.” When Baba finally turned to look at Rithika, his eyes had filled with tears. In all her years, she’d never seen him cry. “They cut them down for wood and then there was nothing between us and the sea—”

She held him close as he wept. The years of loss, of painful memories seemed to surface and she let him pour it all out, her heart crying with him, this frail man who had carried her and supported her over the years.

“I cannot bring back those forests for you, Baba,” she said, her voice trembling a little. “I wish I could, but I can only do so much.”

“You are doing a lot, Rithi.” He leaned back and smiled through his tears.  “Doing something to help, right?”

She smiled back. “Doing something to help.”

“And you’ll always remember our stories and learn from them?”

“Always, Baba. And I’ll tell them to others, through words and through these trees, so that they know as well.”

And she did. As she travelled the world with her team, planting the artificial forest walls along coastlines, she told her stories just as she had promised her Baba. Because even though they hadn’t protected the mangroves, the mangroves had come back to protect them.

And Rithika would always be grateful for that. 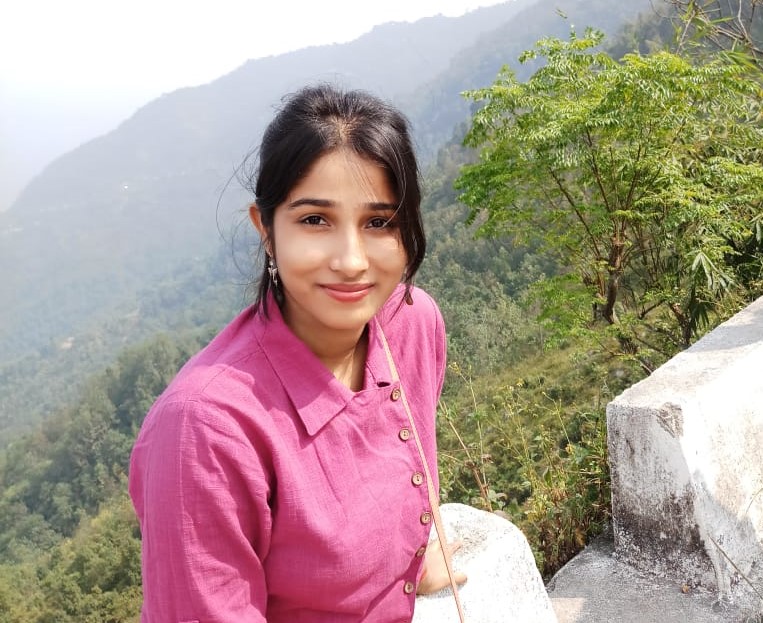 Tamoha Sengupta lives in India. She is a cyber security analyst by day and a speculative fiction writer at all other times. She enjoys watching anime, playing table tennis, or curling up with a good book. Her fiction has appeared in Apparition Lit, Abyss & Apex, Daily Science Fiction, and elsewhere. She sometimes tweets @sengupta_tamoha.