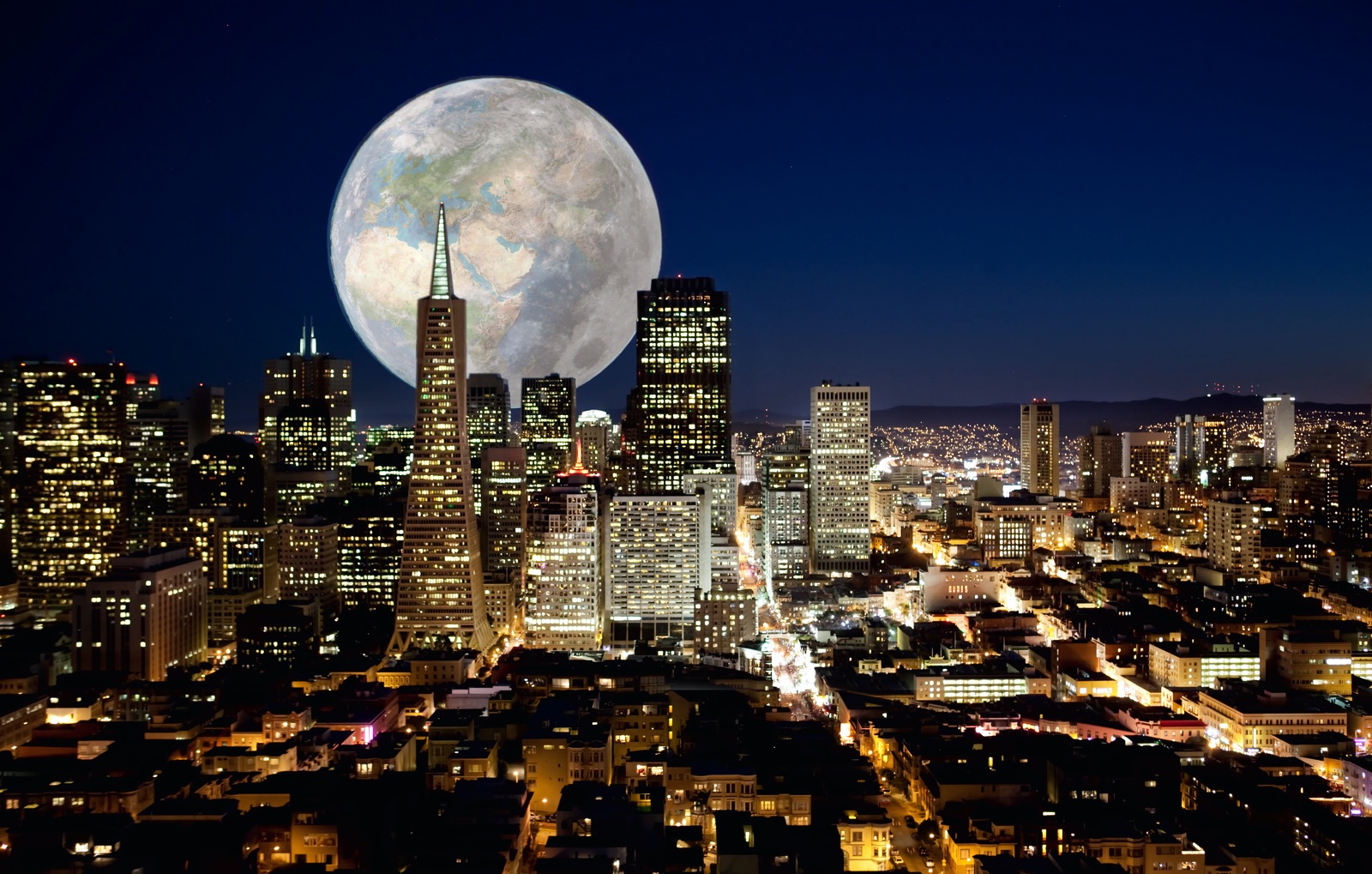 People first noticed it had changed on the turn of the full moon in October.

For the many who looked up at night, the moon appeared different somehow, but they could not put their finger on what had changed. Like a patient looking at an X-ray, the shading looked wrong, but they couldn’t describe how without before-and-after images.

You needed a telescope to truly realize the change, and what you saw was beyond belief.

A giant replica of Earth was superimposed on the moon’s lifeless grey surface: our planet reflected back at us.

Soon the internet was awash with satellite imagery and fevered discussion of the moon. Questions echoed around the world. Where was it being projected from? Why had it been created? What did it mean? A whole host of theories, conspiratorial and otherwise, sprung up. Talk show hosts riffed on the event and invited artists and scientists to discuss its value.

But that was just the start.

It was not a fixed image as people took it to be, but in movement like the thing it represented.

Night by night, it changed. Subtly at first, with the ice caps shrinking on the 3D copy of our planet. Then dramatically as landmasses disappeared before our eyes on live satellite feeds.

The oceans turned a deeper blue with a tint of blood red the following night, and entire continents burst into flame, smoke clouds drifting across half the planet.

Tsunamis swept across seas and oceans, leaving a trail of destruction and drowned islands in their wake. And if you magnified the image you could see other details. Belly-up whales and other sea life on the surface. Charred flora and trapped fauna.

The night after as the moon shrank further, barbed wire the size of stripped forests sprouted and wrapped itself around the globe. And the remaining few islands turned a dead grey, lifeless as the moon the image was displayed on.

And as the moon completed its cycle, the dead planet faded away to nothing. Like a Banksy piece, the priceless artwork was destroyed forever.

Afterwards, the world hailed it as the most ambitious art installation humanity had ever produced, and though it had countless critics, people began to wake up to its message.

No artist ever claimed credit for it, though many people claimed to know who had organised it. Clearly the piece was commissioned by someone with a hell of a lot of money, but it would remain as much a mystery as our own creation, as our self-destructive nature.

It was only later, when the Gemini Observatory scanned the projected image pixel by pixel that they found it. In an oil-spilled section of ocean floated a raft of plastic bottles arranged to spell the artwork’s title: Exhibit E.

The signature took people time to make out, the scrawl illegible, until a team of handwriting experts deciphered it: H. Nature.

Now people continue to look up at the moon’s illumination, wondering if the image will return, and they do more than ever to stop it from becoming reality.

L. P. Melling currently writes from the East of England, UK, after academia and a legal career took him around the country. His fiction has appeared in such places as Typehouse, DreamForge, and the Best of Anthology The Future Looms. When not writing, he works for a legal charity in London that advises and supports victims of crime. He is 50% herbal tea drinker, 100% recyclable. You can find out more about him at www.lpmelling.wordpress.com.