The Cats of Kruger

Asia’s head rested in my lap as I ran her monthly diagnostics. Monthlies required a physical port for field-grade checks and she never failed to seize a snuggling opportunity.

The affectionate leader always came to me. Her brothers, Kivuli and Kisu, took their sweet time in wandering over for testing. Though all three cats were synthetic, they had their individual personalities that combined CPU programming with learning experiences.

“Messah,” said Bandil, the supervising park ranger and my closest friend outside of Togo, over the radio, “will you soon be done with your diagnostics?”

“A poaching group is roaming the north zone. We need the cats.”

I sighed. “Do you really need them? How many in the party?” The rangers tended to rely heavily on Asia and the boys. It was tough for me to see them as units like the rangers did.

“Three. Mercedes truck. I’ll send the pictures when you give the green light.”

Before the conversation ended, Kisu and Kivuli bounded over to me as they took playful swipes at each other.

I completed the monthlies and informed Bandil.

I stroked the leopards’ furry heads. “Bandil’s sending you an assignment shortly, guys.” They comprehended most languages and I’d come to understand them and their individual behaviours. Asia had always been the leader. Kivuli, Mister Inquisitive, had mastered his stealth techniques while stubborn Kisu thought himself invincible. Even with slight drawbacks, the trio used their strengths to get the job done.

Without hesitation, Asia sprinted into the distance with Kisu and Kivuli close behind. In seconds I could barely see them. Lanes of dust settled along their vacated routes.

I started my jeep and drove north.

With little training in self-defense or weaponry—being an engineer—I was often a distant observer during the apprehensions I actually got to witness. Even so, I enjoyed the infrequent thrills amid my worry for the leopards.

“Do you have eyes on the cats?” I asked Bandil.

“Through binos, yes,” he replied. “They’re assessing the situation, being cautious.”

Minutes evolved to half an hour, with no further communication from Bandil or the other rangers. The north zone of Kruger National Park was eerily silent.

I radioed the rangers’ encrypted frequency to reach someone. “Messah to patrol. Anyone out there?” Samuel, Yvette, and Paula would not, or could not, reply.

The jeep’s headlights continued to burrow through the now-black trail. A near-infinite darkness supplemented by the sounds of nocturnal predators.

I nearly fell into a trance before gunfire startled me.

Jeep tires popped and the vehicle nearly rolled from my overcorrection. The left side of my conveyance crashed to the earth on its wheels after the close call.

While I sat stunned from the gunshots and the wreck, someone wrenched me from my seat and onto loose savannah dirt before floodlights blinded me.

I struggled to my feet, holding my right hip.

Bandil stood in front of me. Two women and a man, all three European, stood behind him. A fire was growing far in the distance behind the group. I looked at Bandil, confused.

“Distracted.” Bandil nodded toward the arson. He trained his Sig Sauer pistol at my chest. My trusted coworker had been a dedicated ranger. I used to admire the native Namibian but now his smug smile fuelled an anger in me.

His face was as stone. Samuel, Yvette, and Paula were dead. He offered an open hand to me. “The override.”

Bandil couldn’t control the leopards without it.

Four weapons pointed at me. My mouth was like cotton.  I pulled the override pendant from my cargo pocket. It shook in my closed hand. A brief fantasy of pulling my gun, bagging the bad guys, and being a hero crossed my mind. No doubt they’d gun me down before my pea shooter left its holster.

“Give it to me, Messah.” Bandil’s voice and demeanour were calm, patient.

“Why not just kill me and take it?” I dared him to kill me. My voice shook through my defiance. “Did they not pay you enough?”

“You have your family at home. You have a lot to live for. That and we can’t have the pendant damaged. I don’t want to kill you so don’t make me do it.”

My arm moved to hand over the cruel device. What gain could I receive by yielding to his commands? Saving my own life? Self-preservation paled in comparison to the fate of Kruger’s wildlife and the leopards created to protect them.

I placed the pendant back in my cargo pocket. “I can’t.” I stared him in the eyes. My tears welled. I knew the poachers would kill me. I hoped my wife and daughter would understand my principles and what was at stake. Martyrdom wasn’t a desired end to life, but cowardice had no place in the Boukpeti lineage or among the Ewe people.

“I respect your decision and I’m honestly not surprised. Brave of you, Messah. Brave but foolish.”

My long-time coworker raised his sidearm and stalled with the muzzle near my forehead. I still believe he didn’t want to kill me. However, he was beyond his personal point of no return. Too much money at stake for him to go back.

Bandil silently pleaded for me to give up the pendant, but a lithe shape knocked him from his feet. A crunching of bone soon followed.

Rifle rounds volleyed through the air. The poachers, panicked at the deadly blur they’d witnessed, shouted to each other in Dutch.

Exposed in the open during the chaos, I gathered my fight-or-flight senses. I ran for cover behind my jeep. But a round took me in the hamstring.

I cried out in pain. My college professors never mentioned being shot as an occupational hazard.

Asia slunk behind the jeep and nudged my wound with her nose. Rounds continued to go off as the poachers’ truck engine started up.

“Where are Kivuli and Kisu?” The back of my leg felt as though someone had stuffed hot coals inside of it. Pain radiated around my thigh and into my knee. No doubt the bullet was lodged in my flesh.

In reply to my query, the synthetic cat stepped across me to look at the speeding truck. She calmly listened to wind-carried screams from the vehicle. Although it sounded like death throes, it was a simple, albeit messy, apprehension of the poachers. The cats had done their job—what they were made to do.

Asia sent a medical emergency signal for me and a call for auxiliary rangers to arrest the poachers.

Bandil lay contorted in an unnatural position. His lifeless eyes stargazed as if his spirit had escaped the trappings of money and temptation. I crawled over, straightened his body, and shut his eyelids.

Asia canted her head in curiosity as if thinking, this man just tried to kill you.

“He wasn’t always bad.” I took the override pendant from my pocket and inspected it. I didn’t remember putting it back. “People are strange and complex creatures, Asia. You never know what we’re capable of.”

The drone of the fire response team’s approaching medical vehicle echoed in the darkness.

Asia dug a shallow grave for the pendant. I followed her lead and threw it in before she covered it.

To this day, I swear she was grinning. 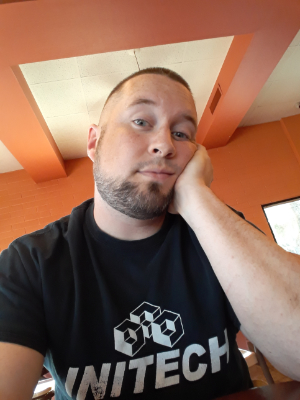 Ryan grew up in North Carolina, but currently resides in Arizona. He served six years in the Marines as an administrative clerk. He loves time with his wife and kids, Spongebob Squarepants, 1990s action figures, and retro gaming. Let’s face it, Ryan never really grew up.