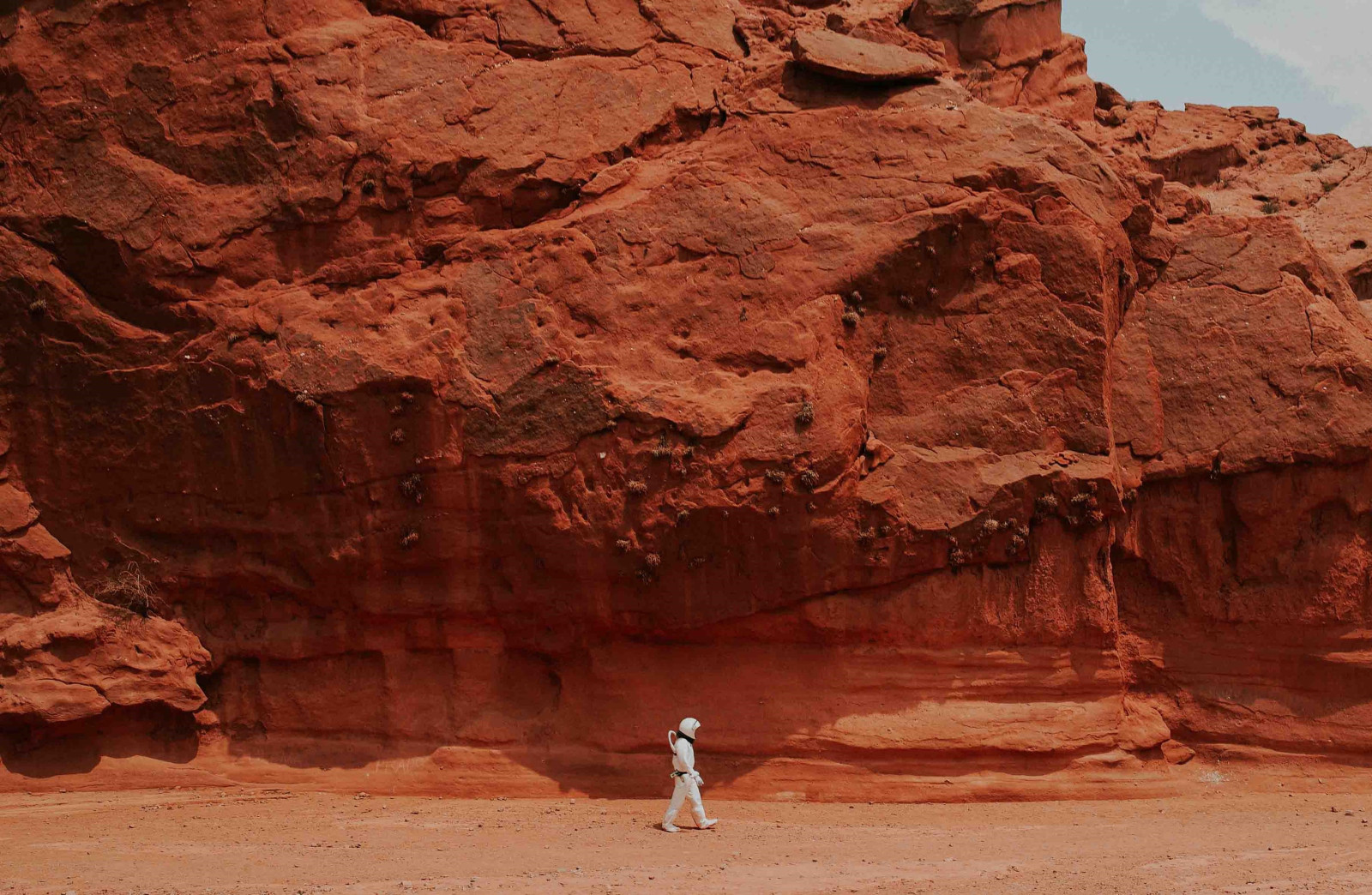 Uphill Both Ways in the Snow

“Do I really have to be here for this?” said the finance minister, sweat rolling down his round face as they trudged across the shimmering tarmac.

“You could let the rest of us talk to him and cut you out of the negotiations,” said the agriculture minister.

“It just galls, asking a colonial for help,” complained Finance. “We’re supposed to be helping them. A generation ago, we helped them all the time.”

“That’s why they owe us, wouldn’t you say?” said Agriculture. He was bronzed and handsome, impeccably dressed in a pinstripe suit, with a cowboy hat to still look like a farmer. “I’m hoping they see it that way.”

“We hardly have any other options,” said State. “We wouldn’t have asked him to come if we did.”

The Martian delegate was already climbing down out of his shuttle, a lean and lanky figure with grey hair flopping over his face.

The Martian scoffed. “Respirator? In this atmosphere? When I was a kid we had half a percent of cee oh two and didn’t make a fuss about it.” But he took the breather and slapped it on with a practiced hand.

They picked their way back across the airstrip to the little building designated for the meeting. “I’m frankly embarrassed to have you here,” said Finance, puffing a little as he hung up his respirator. “Earth is a mess.”

“’S why I’m here,” said the Martian amiably, taking a seat. “You wanted Mars’s help with your little atmosphere problem?”

“It’s not a little problem,” said State, opening a folder and laying out a number of papers, detailing carbon dioxide levels, temperature trends, and sea level rise. “By our estimation, we have only decades before Earth becomes uninhabitable.”

The Martian peered at the papers, pooching out his lips. “You know, it was only decades ago that Mars was uninhabitable.”

“Yes, we felt you would be able to understand our plight.” State gave a gentle smile, the one she saved for reassuring citizens in times of crisis. In recent years it had gotten a lot of mileage.

The Martian pushed the papers back across the table. “Then you asked the wrong planet. I grew up in a tunnel, lady. I breathed wild air for the first time when I was ten years old. And then we had a cold winter and the Northern Ocean algae mat died off, and the amount of carbon dioxide released made the air toxic for another ten years.”

Finance leaned forward, his round face eager. “So what did you do?”

“We started wearing breathers again and we engineered cold-resistant algae. Terraforming isn’t a fun little exercise for babies. It’s work and there are setbacks every year. The important thing is that we never stop trending the right way.”

The Martian stabbed a finger at her. “That,” he said, “that’s your problem there. Not any of this stuff.”

“I’m pretty sure these things are problems as well!” insisted Finance, pulling a paper toward him. “Look at these hurricanes, they’re increasing—” he squinted at the chart on the paper—“a lot!”

“Storms?” said the Martian. “As our terraforming project goes on, every year the weather is some different wild thing. Till the levels are constant, y’see, it’s not gonna settle down. One time I had to go to work in a dust storm so bad you couldn’t see your hand in front of your face. People can survive storms.”

State turned to the Martian, her face apologetic. “You see, people understating the severity of the problem is what got us into this mess. Everyone said it wasn’t going to be a big deal, and the next thing we knew it was too late to fix.”

“The problems are certainly upon us,” Agriculture said. “Food production is down, thanks to storms and droughts. We’re expecting a 2% shortfall this year. That means 2% of the most vulnerable Earthers are likely to starve.”

The Martian narrowed his eyes. “That’s not what I get out of the math. ’Bout ten years ago, there was a blight in our rice crop. We all tightened our belts for a while. Kids got first dibs on it. But nobody starved.”

“On Earth, people starve,” State said earnestly. “Every year, a certain number—it’s in the dossier.”

“Then why don’t you all eat two percent less?”

There was a silence around the table as the ministers exchanged glances. State pulled a paper toward her, flipped it over, and made a note. “Thank you for your advice, sir.”

“Is that what you want here? Advice? I got a lot. I also brought some of our high-yield seeds, algae cultures to sequester the carbon, whatever we have. Of course we don’t have anything for your plastics issue, or the atmospheric particulates. But I brought everything we thought would help you. I’ll stick around as long as it takes to teach y’all how to use it.”

Finance stared at Agriculture, who caught the glance and stared at State. Finally she said, “That’s actually not the sort of help we’re looking for. I think maybe you underestimate how drastic the damage to our planet is. What we want is some kind of mass refugee status. Our planet is rapidly becoming unlivable. Yours is a paradise. And there’s plenty of room— not, maybe, for the whole population of Earth, but for as many as we can hope to get off in time.”

The Martian’s face darkened. He leaned forward, about to speak, stopped, started again. “You,” he said at last, “can fuck off.”

“You can fuck off into the sun,” he clarified. “And then fuck on through it. I don’t care.

“My people started with a barren rock and made a paradise. Y’all were given a paradise and turned it into a barren rock. I have no patience with you. I grew up working every minute for my planet. Tending the algae mats in a respirator. Processing sewage to get methane to run systems on while you were all burning dinosaur oil. Going without things I wanted just to make sure every single Martian had enough air and water and food to live on. We carved that paradise out of rock with sweat and blood and tears, and look at you. Look at you!” His gesture took in State’s smart suit, Agriculture’s hat, Finance’s paunch. “You’ve never gone without a day in your life, and you want me to believe you can’t survive? You don’t want to survive.”

State’s face was flushed. “I assure you, we very much want to survive. The yearly death tolls—”

“You chose that,” said the Martian. “You could’ve been working all this time to prevent that, but no. You trashed this place like a frat house you weren’t paying for. And now what’s the plan? Y’all and your friends come over to our place and leave everyone else here to foot the bill?”

Finance swallowed. “Perhaps we could find a way to get everyone off—”

“No,” said the Martian. “We ain’t doing that. We’ll take refugees, maybe, but not you. You and your friends will never be welcome, ’cause you’re the ones that caused this mess. Any ship comes our way full of rich Earthers and government types? It’s getting fired on. I’ve got my government’s approval to say that. They’ve been paying attention to what y’all have been doing back here.”

State shuffled her papers back into a pile, her face pale. “You’re sentencing us to death,” she said.

“No ma’am. We’re sentencing you to growing a pair. Get off your asses and fix your goddamn planet, because there isn’t another one for you. You don’t get to give up on Earth. We won’t let you.”

With that he heaved himself to his feet and stomped out of the building. Through the window they could see him trekking across the tarmac alone, barefaced and sweating, back to his rocket.

“He’s like my granddad,” said Finance, voice quavery with released tension. “‘In my day we didn’t have these fancy schoolbuses! We had to trek to school uphill, both ways, in the snow!’”

Agriculture was on his feet, grabbing a respirator at the door. “I’m going after him,” he said. “Gonna get those seeds.” 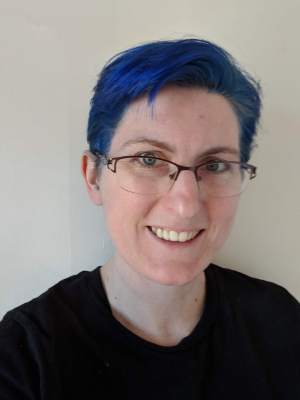 Sheila Jenné grew up watching Star Trek and reading about spaceships and dragons. Today, she has four young children, a job writing financial advice articles, and an incurable itch to create worlds and galaxies of her own. When she gets a brief break from those callings, she likes to spin yarn, bake, and garden.