An Apology from the Natives of Earth
Jon Lasser
Fiction
February 14, 2020
The Way of Water
Nina Munteanu
Fiction
January 25, 2019
Parametrization of Complex Weather Patterns For…
Alex Shvartsman
Fiction
September 18, 2017
Beneath Everything the Future Still Exists
Maggie Chirdo
Poetry
February 25, 2022
King Tide
Alison Wilgus
Fiction
January 18, 2018
What can we get you? 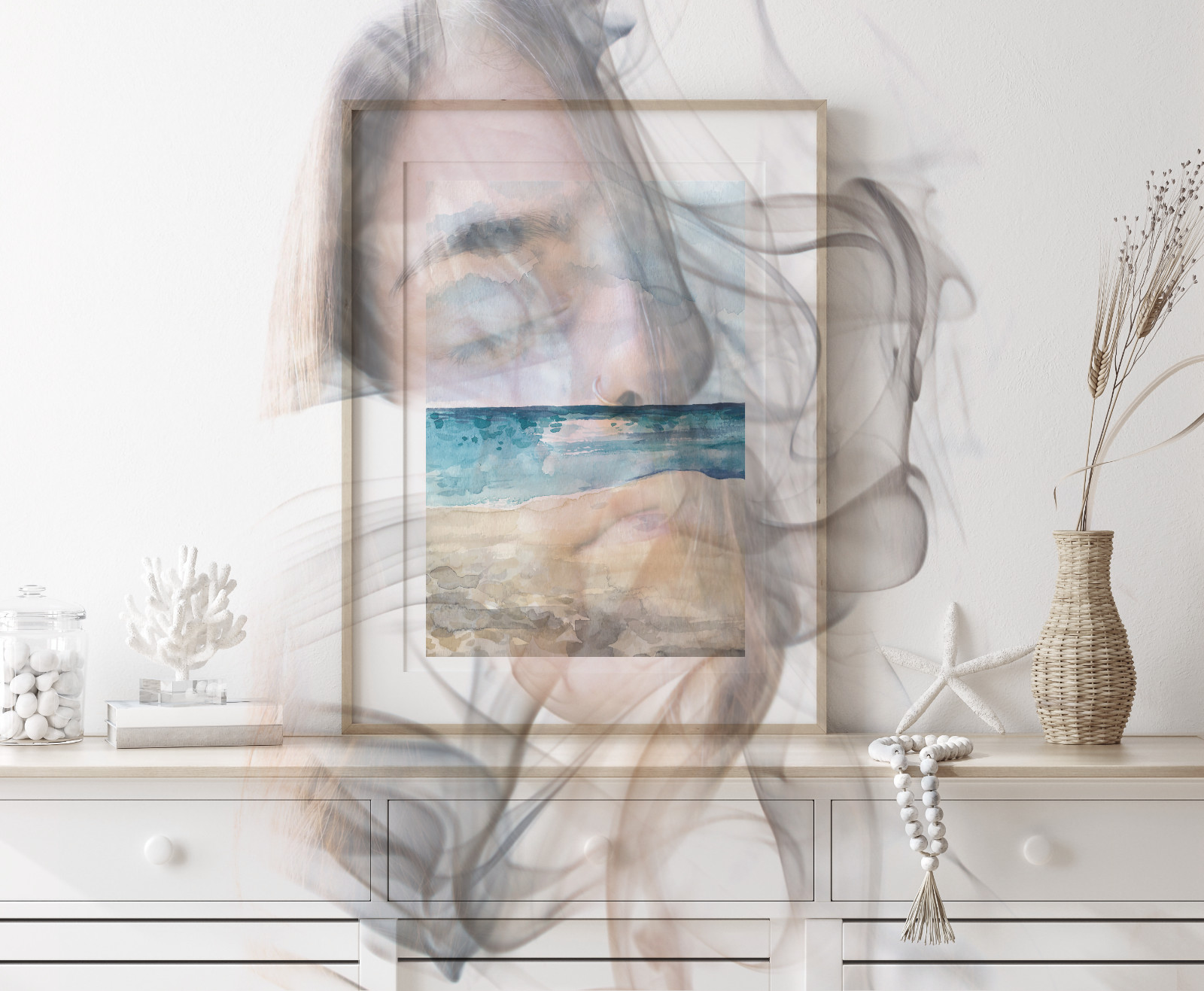 As his wife passed through the hallway wearing a terrycloth bathrobe, her expression vacant, as if she’d slept in too long, Emery saw a painting through her neck. Her hair was up, the strands against her neck prematurely greyed, as was the rest of her, washed-out, losing substance. They hadn’t had a decent conversation in weeks, not since moving to the beach house. He had thought the ocean air would do her some good, and he even bought her an expensive pair of running shoes so she could jog beside the tide with him. It would rejuvenate her.

When they were dating, Mira had warned him that she went through bouts of low moods. What he focused on was the word bouts, and the way she said it with a self-deprecating laugh that lifted her chin and showed the strong pillar of her throat. She twirled a straw around the melted murk of her margarita. He liked how easily she laughed then, how she could rattle off chemical concentrations in the atmosphere, and he liked the curling strands of hair against her neck, which were beginning to grey even then, in her early twenties. Now they were both nearing the end of that decade, and Mira had dropped out of her Environmental Science program. She’d never been able to finish her dissertation. Her running shoes still had the cardboard in them. Emery waited for this bout to be over the way he waited out a cough after bronchitis: impatiently, an ache lingering in his chest.

The painting filmed Mira’s neck, a painting of the ocean, as if the cloud-scrawled view out the living room window wasn’t enough. The ocean had to be inside, too, shadowing the hallway, shoring over Mira’s skin. Mira went to the bathroom and after a few minutes she reemerged see-through, downright wispy. If Emery gripped her shoulders, his hands would pass straight through and meet somewhere in her chest, and the only thing he would feel would be his own palms. He watched her drift back into the bedroom where she would lie down in the bathrobe as if she had taken a shower and was waiting for her hair to dry, except she hadn’t done either of those things.

He left. He took the car. He drove around town, drifting in his own way, though thank god more restless, thank god more burning, and crisp, and solid, he didn’t let paintings show through his neck. He ended up at the only lively place in town, the brewery. Due to the tourists, the wait took an hour and when he was finally seated at the bar, the waiter mixed up his beer with someone else’s order, a cider. The cider belonged to an older woman down the counter. He sipped her drink before realizing, then held the sip in his mouth guiltily, until the acidity pierced through the cold.

The woman scooted closer to exchange their drinks. He’d seen her before, around town, and at this same brewery. She shook off the mistake when he offered to buy her a new drink, smiling with chapped lips. She was friendly. He wasn’t. She wore a heavy aviator coat that had a symbol of the aquarium on the arm, a wave that turned into an iconographic circle containing the aquarium’s name. Its font was bubbles.

“I’m a volunteer,” she said, seeing him look at the symbol. “I come here for lunch breaks. It’s not the first time someone’s drunk my cider. You from around here?”

The woman’s name was Frieda. She was happy to have young blood in town, and even happier to learn of Mira’s studies in Environmental Science, which Emery reluctantly mentioned when he was waffling about revealing his wife’s lack of occupation. Frieda said he and his wife should volunteer at the aquarium. Emery kept his face neutral. It wasn’t quite tactless to solicit him as a volunteer. He stared into his glass, seeing his nose distorted in the brown liquid and thinking of his amorphous spouse awaiting him at the house.

“You take a few weeks of a class over the summer,” Frieda was saying. “Then they assign you to one of the exhibits. I’ve been in the bird enclosure for five years. It’s like getting to be a marine biologist and a voyeur at the same time! I could tell you so many stories about the mating pairs, especially the black oystercatchers.” Frieda laughed, bunching in her coat like a puffin. She did look a little like a bird, rounded in a comfortable way but with a thin, keen face. After a moment she sobered. “Though it’s a little sad to be a marine biologist right now. The poor coral. This year was one of the worst bleaching events on record.”

“From El Niño,” Emery cut in, feeling he ought to contribute something to the conversation.

“Not just El Niño,” she said, scrunching her eyelids at him like a grandma who had caught him playing frisbee with a beached starfish. Mira used to joke that nobody killed the mood like an environmentalist. This joke usually came on the heels of her renewed fervour for composting, or pressuring him to eat a few days a week without meat, or swearing off grocery bags and straws.

When Emery managed a somber nod, Frieda turned cheerful again, and apologized saying, “You have a denier look about you.” Then she said, “The thing about coral is,” and from her shift in tone Emery knew he was about to learn a few things, and he pitied himself on his stool, which couldn’t be discreetly edged away. “The thing about coral,” said Frieda, “is that it has a symbiotic relationship with a microscopic algae, which feeds it and gives it those bright colours, all those nice reds and oranges. But if the ocean temperature rises, or there’s too much pollution, the algae gets stressed and leaves, and the coral starves.”

Emery knew all this. Emery had heard all this from his wife. The truth was, Emery hadn’t noticed the painting before. The beach house had been a rental for tourists and it still had the old decorations with all their lackluster personality, meant to layer over the thoughts of the temporary occupants like frosting, flavourless and sweet, giving pleasure without the burden of nuance. Bland, peaceful oceans, as if peace needed to be diluted of any vibrancy to be effectively absorbed. He asked Frieda what he was supposed to do about the coral, convinced she would suggest something banal. Recycling. Watch your carbon footprint. Go running in the sand.

“Try scuba diving,” was Frieda’s conclusion. “Don’t listen to me. See it for yourself first.” She wrote the aquarium’s number on the coaster. “Or come and volunteer with the black oystercatchers.” She dropped the coaster into his lap. “You don’t have to worry about them dying out. They live under a net.”

At the beach house, Emery returned to find that his wife, resting in the bedroom, had made her full transformation to vapour. There was nothing left of her but a trailing fog across the bedspread, seeping into the seams. He would get her out of here, he assured her.

He took each corner of the bedspread and folded it around her. He carried her into the kitchen, and having not sworn off grocery bags, not completely, he put the bedspread inside of one, tying the ends together to keep her from filtering out while he transported her in the car, which he’d left running in the garage.

He put the bag on the front seat and untied it and waited for her to emerge from the folds of the bedspread. He told her he would drive her anywhere she liked. Just say the word. “A different beach,” he said, knowing it would be the same beach, everywhere, with the same footprintless sand and the same bleached coral in the same painting on the same wall.

Mira started to coalesce, encouraged, he thought, by his voice. Maybe she’d just been asleep. His vison grew hazy. The car engine hummed its low carbon song. The ache spread through his chest and tremulously, watery fingered, crept over his mind and behind his eyes, where after a pass of dizziness he understood, he did understand, he thought, though he didn’t really, he just wanted to—would that be enough?—and no sound of the garage door opening came to him until his neighbour was there, wrenching Emery’s car door open the rest of the way.

“Don’t do that,” Emery said, but his wife had already dissolved into the damp air. 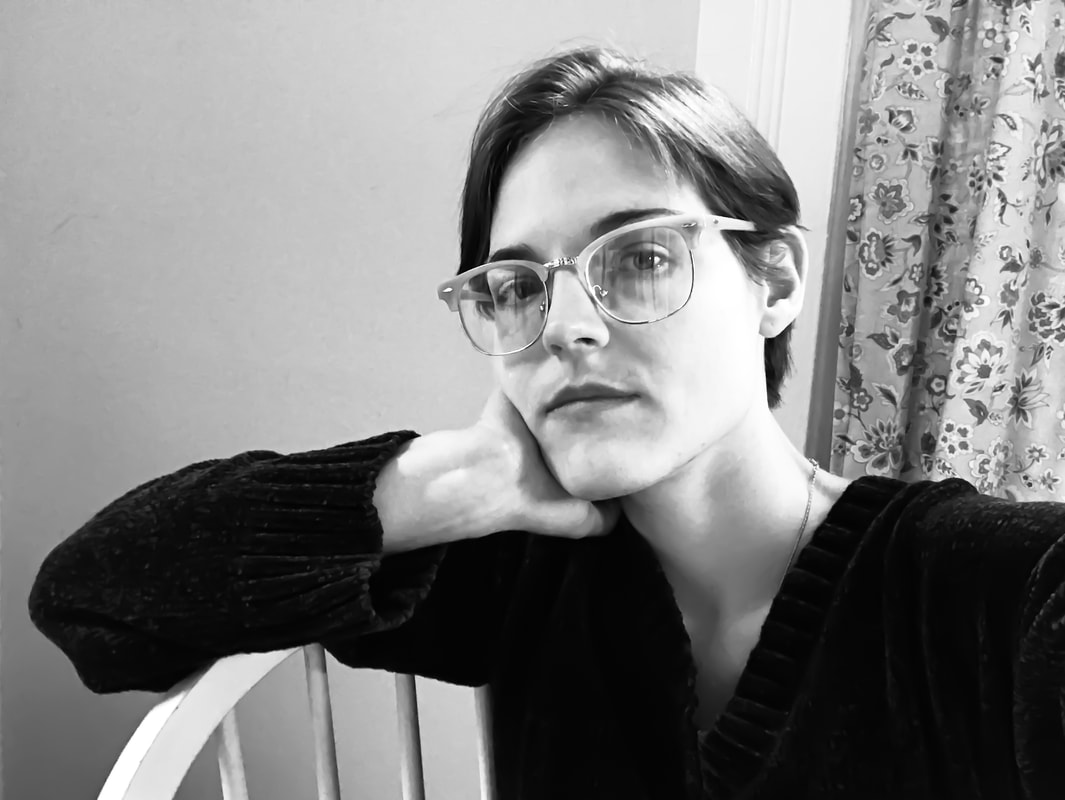 Currently an MFA student at Purdue, Lee Bell spends most of their time figuring out how to wrestle big feelings into small words, unpack the weird from the mundane, and face that horror lurking in the corner. Work also forthcoming in Violent Vixens, an anthology by Dark Peninsula Press.