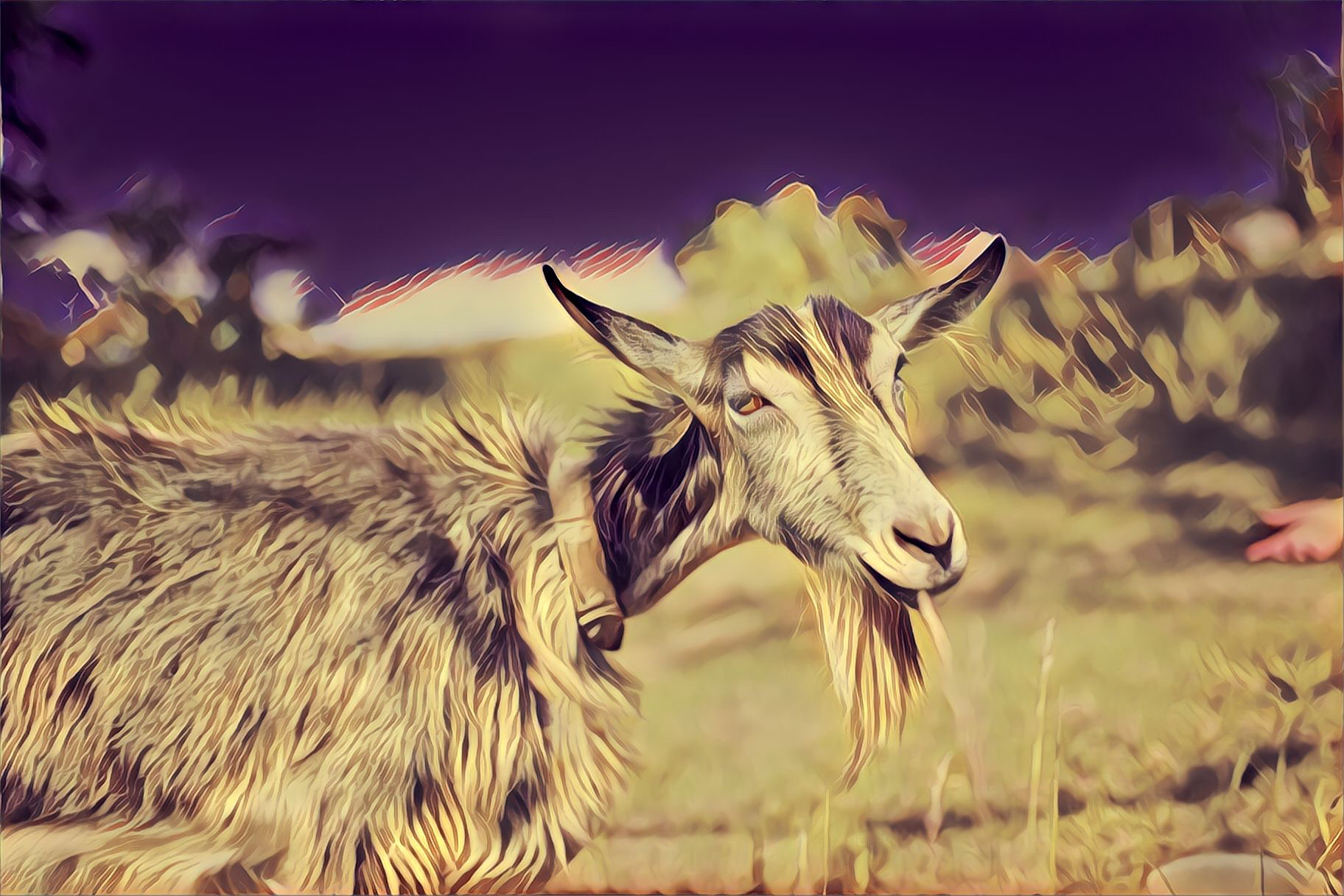 Marianne pulled the cover over the printing press, and packed the last of the slim volumes in the bags on the floor. The nagging ache in her gut gave a sharp twinge as she bent down. Indigestion, she told herself, but she knew it wasn’t. Knowing did no good, anyway. No more chemo, no more wonder drugs. There hadn’t been a shipment of any drugs from overseas in years. These days, if you couldn’t make it locally, you went without.

She slung a bag over each shoulder and shuffled down the hallway, smiling at Mrs Niroshan, who was tiredly walking back and forth trying to quiet the baby. Behind the closed door of the second bedroom she could hear raised voices. At least the authorities were only sending her one refugee family at a time these days, while they waited for their place on the inland convoys. There had been times when she’d packed up to eighteen people into her three-bedroom house.

Melba greeted Marianne with a loud “Meeeehhhh!” from her stall in the garage. The goat shifted impatiently as Marianne attached the carrier bags to her harness.

“Dude,” she said to the goat, as they walked out to the street. “Where’s my driverless car?”

Melba knew the answer to that one. “Meee!”

“Goats go where goats want to go. I don’t think that counts as driverless!”

She could feel warmth in the wind from the east, bringing a swampy stench with it. And barely spring yet, Marianne thought. The mosquitoes would be hatching in the brackish marsh that covered the remains of eastern Christchurch.

She could hear high-pitched giggles as two little boys played in the water-filled pothole that spanned half the street, conducting a naval battle with tiny ships made from flax stems. Dot’s granddaughter was hanging out washing in her front yard. As Marianne passed, she sang in a pure high soprano.

Rain still falls and the grass still grows,
Boy sees girl, you know how it goes.

Dot was leaning on the gate watching the kids, and Marianne stopped, yanking at Melba’s rope when she tried to sample a roadside patch of cabbages.

“Here,” Dot said. “I saved some carrot tops. Did you hear about the latest sea height reading? 10.73 metres! I always wanted a seaside property.” She never seemed to tire of that joke.

“Better get that bikini ready,” Marianne countered, as she always did, and Dot cackled happily. The truth was there were no more beaches. There was no edge to the ocean any more. It had gulped down half the city, and vomited back a swamp of stinking mud and twisted wreckage.

The last ten years had been a frantic race against the tide to render down buildings and infrastructure to their constituent parts. Everything of possible use, including topsoil and trees, was removed by the Locust Army, to be loaded onto the electric trucks travelling inland, to the new cities. Fairlie, Ranfurly, and even sleepy Naseby had been transformed almost overnight, as the coastal refugees fled to higher ground.

Melba plodded around the corner, a carrot top dangling from her lips. Marianne let the goat pull her along, thinking back over the years. When was it? Was there one particular day? That day we finally realised things were never going to get better?

There were those pictures on the news, back when they still got television broadcasts. That shaky video shot with a phone from the last plane to leave Kiribati. The crowds pressing against the chain link fence at the airport. The wave of brown water churned up by the plane’s wheels as it moved down the runway. The view of that young woman below, waist deep in the swirling water, holding up her baby over her head, mouth open in a silent O as the plane lifted away. Was it then, when the first nation drowned? Or had they still thought something could be done?

Was it the summer the farmers built pyres of black and white carcasses, sending columns of stinking smoke rising up from the plains, after the ships stopped coming and the dairy industry collapsed?

Was it the winter that the flood waters covered south Dunedin, the Hutt Valley, and Greymouth, and never receded?

Or that summer the meteorologists added new colours to their temperature maps, and half of Australia went up in flames? Or the autumn that the first F6 hurricane hit the Caribbean?

Was it the neo-dengue fever epidemic of 2037, or Black Tuesday when the banks went down for good?

Or that one terrible night when a dirty bomb rendered Sydney uninhabitable. And then likewise Chicago, Los Angeles, Tel Aviv, Manchester, and Marseilles? Or the vicious twelve-day war that turned both North and South Korea into radioactive wastelands, and the last frantic flailing “accidental” missile strikes that took out Japan and half the coastal cities of China?

Marianne shook her head. Maybe it was a different day for everyone who’d lived through the last twenty-five years. She tied Melba to a post outside the old supermarket, now filled with a combination farmer’s market and travelling garage sale. A hand-painted sign in the window of the old pharmacy offered “Books, Drugs, and News for Sale. Gossip for Free.”

Marianne stuck her head in the door. “Hey, Sam,” she said. “Got a fresh batch for you.”

“Marianne, lovely to see you,” Sam said, stepping outside to help her carry the bags inside. He laid the slim volumes on the counter, one hand absently scratching the lumpy melanoma on his left ear.

“At least I achieved my life’s ambition,” she said, with mock hauteur. “I am a published author, with sales in the hundreds.”

“We should have a book-launch party.”

“Oh yes, with wine, and those little canapes on silver trays!”

Sam laughed. “I really don’t know where I’d get the smoked salmon and crackers.” He took out a small notepad and added up some figures.

“With what you brought me today, here’s what you have to spend. What can I get for you?”

She was looking out the window at the hills. “Something from the back room. I need 200 mg of morphine, Sam.”

She avoided his eyes. “Not yet. But I’d like to be ready. I don’t know how much longer I’ll be mobile.”

He looked at her for a moment longer, then turned and unlocked the door behind the counter. He returned with a small plastic container.

“Send word when it’s time,” he said, coming with her to the door. “I’ll come around.”

“I will,” she promised. “I’ve put some books aside for you.”

Outside, Melba had finished the carrot tops and was chewing on her lead rope, a thoughtful expression on her face.

“Come on, you silly goat,” Marianne said. “Let’s go to the park and you can have grass for lunch.”

Marianne looked up at the green hills as they walked. Rain still falls and the grass still grows, she thought. Maybe I have not had that one particular day yet.

Copyright © 2019 S. A. McKenzie. Originally published in New Orbit. Reprinted with permission of the author.

S.A. McKenzie is a New Zealand writer of offbeat and blackly humourous science fiction and fantasy stories featuring time-travelling rabbits, carnivorous unicorns and man-eating subway trains, because someone has to speak up for these misunderstood creatures. Find them online at www.hedgehogcircus.com and on Twitter: @samckenzie2.