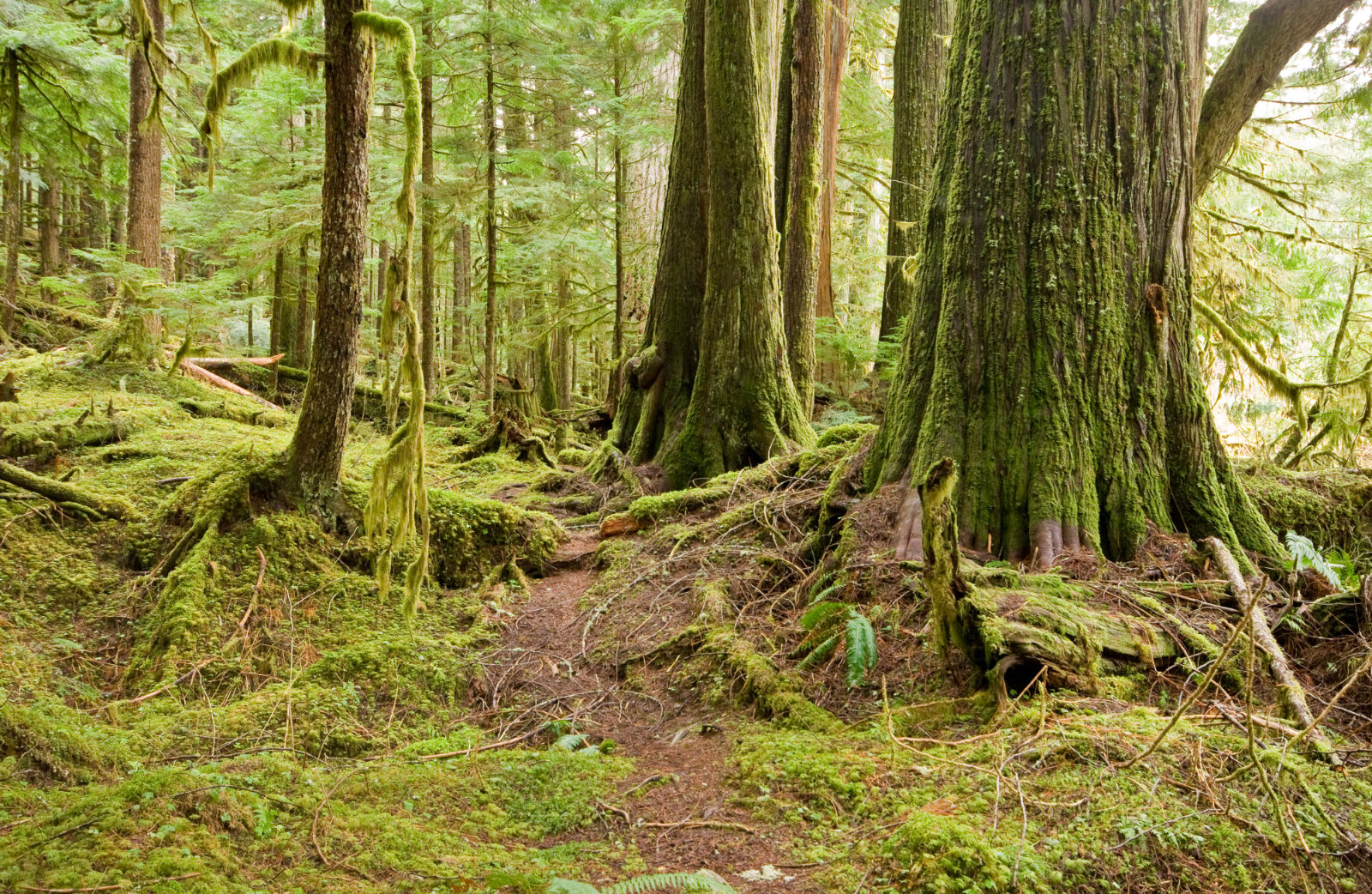 I was still procrastinating on my planned months-long process of cleaning out the office ahead of my retirement when old pal Roy Harvard interrupted with a call.

I didn’t mind his intrusion. Most people clean out their office in a day, or in a few minutes if HR thugs are hovering over their shoulders. I’ll be taking my time.

I gave into procrastination and took Roy’s call.

“You’ve got to come see this,” Roy said in his hyperbolic way. “I’ve found some old-growth forest!”

I removed a book from the shelf, put it into the empty cardboard box, and took a long breath. Progress. “I’m not up for another wild-goose chase, Roy. I’m packing it in. Where’d you find some now?”

“There’s no more old-growth forest here. You can’t fool me into going on another hunt to nowhere. This is a ruse to get me to show up to a surprise retirement party. I told everyone: no parties. I just want to fade away into the woodland. Topple over and return to the soil.”

He laughed. “There’s no retirement party for a grumpy old state forester like you. Everyone’s happy you’re going. Especially your replacement. Get over yourself.”

“OK,” I trailed off, a little disappointed there’d be no party to not show up to.

“You’ve got to believe me. There’s a hemlock off the Mohawk Trail that could be four or five hundred years old. We’ve got to get a core sample. You’re the best at it even with your shaky hands. Bring that replacement of yours and see if we can find out what these old trees are saying to each other.”

I thought about grabbing another book off the shelf. “Still don’t buy it. This whole state has been clear-cut two times over. And now you just happened to discover an ancient hemlock somewhere in western Massachusetts.”

Roy was getting up there too. Was it possible he’d simply lost it? I wondered whether he was just trying to relive the glory days of his big find of old-growth forest back outside Montreal in the ’80s. The discovery that put him on the map.

Since this alleged old growth wasn’t far away, I decided to humour him. One last opportunity to be in the field with my able replacement. Maybe she’d learn something too.

The next morning was as good a time as any to go on this quest. I drove the old pickup to our office parking lot to rendezvous with Naomi, the fungi whisperer.

She was leaning against her Tesla pickup when I pulled up in my clunky old junker. She looked up casually from her phone, pushed her short locs away from her eyes, and tossed her equipment in the back.

She hopped in the front seat. “Sure you don’t want me to drive, Ted?”

“I’m not retired yet and you can’t confiscate my license just because I’m so old. I’m not sure your pseudotruck thingy can handle the hills.”

“Oh, it can handle. Have it your way. For a little longer.”

She was just giving me the needle. I was comfortable with her as my replacement although sometimes I didn’t let that on with her. I wanted to keep her on her toes so she could learn as much as possible before I left and faded into the forest, degrading into a pile of crumbly, spongy humus.

We drove in silence on Route 2 for the first fifteen minutes as she answered emails on her phone. It was early morning, too damn early to talk shop, and still cool enough that I could drive with the windows down. I like to drive that way to listen to the trees as much as I can with no traffic drowning them out.

Naomi came up for air from her emails and looked to each side of the road.

“I caught the end of a panel he was on once.”

“Older old school than you?”

We were falling into silence again when I thought I heard the trees talking to me. But Naomi beat me to it.

“Did you hear that?” she asked.

“I didn’t even have to use my equipment for that one.”

“What did you hear?”

She rolled down her window and listened with a cupped ear. My old truck still has crank windows. For an old crank. “Not sure. Something something.”

I leaned my head toward my open window. The trees around this area have gotten used to us. They know we can hear them speak through their mycorrhizal fungi networks. And they’ve found a way to broadcast to us without the use of Naomi’s groundbreaking Natural Intelligence (N.I.) equipment. They’ve learned since she’s been working with them.

This part of Route 2 doubles as the Mohawk Trail, which was once the main trading route for Native Americans between the Atlantic tribes and others in Upstate New York. I love it because it follows the Millers River and Deerfield River into the Hoosac Range where we’re headed.

Before our silence overwhelmed us, we’re in Florida. Not the state. Florida, Massachusetts, that is. We’re at the Hoosac Range in the Berkshires. Lack of hikers in the area was probably why no one discovered this alleged old growth. If it existed or was all in Roy’s mind.

Roy was waiting for us at the bottom of the hill. The hatch to his Subaru was open and he was sitting on the bumper, his legs crossed.

He stood as we approached.

“Finally,” he declared. “I get to meet the great Naomi Jenkins, tree talker!”

Naomi let his rhetorical flourish whoosh past her and disappear into the mountain air. It was relatively cooler than in the valley on this August morning but the humidity was still brutal even here this early.

Naomi hefted her backpack on in what seemed as noisy a manner as possible, grunting as she shifted the equipment inside to the middle of her back.

“Let’s go old-timers. I’d love to lead but Roy, you’re the only one who knows where it is.”

Roy grabbed a walking stick out of his car and shut the hatch.

We found a gravel road at the far side of the parking lot. It was mostly flat at first then suddenly uphill.

“This service road is for the wind turbines and will take us to the top but we’re only going about halfway until we dive into the forest,” Roy said.

The young trees soon gave way to larger ones that hadn’t been disturbed in seventy-five years or more. Many of them were well over one hundred feet high but there was no hint of old-growth forest in them.

A half hour into our climb, we reached a hairpin turn. Roy shouted ahead to Naomi, “Here!”

She turned back to him. “Where?”

He pointed at a dense thicket. “This way,” he said and took the lead, hacking at the brush with his walking stick.

Naomi followed him onto the narrow path that disappeared, swallowed up by greenery by the time I caught up. “Don’t lose me!” I shouted through the branches scratching at my face.

A birch branch rebounded and smacked me in the ear. “Ow!”

No words of concern filtered back from the other two up ahead. I couldn’t even hear them slashing through the underbrush anymore. I needed to catch up.

Running through the undergrowth, the branches slapping at my face, I stumbled into an open area and went down.

Naomi picked me up and Roy handed me my glasses.

I was shaking but the forest floor duff layer had saved me.

“I'm OK. It was a soft landing,” I said, stomping my feet. “This feels really healthy and very deep.”

“Yeah. It may be the best duff layer I’ve ever seen,” Naomi said. “I can’t wait to get started.”

With my glasses back on, I marvelled at one of the finest examples of old-growth forest I’d ever stumbled upon or into.

Old-growth forest isn’t a congregation of old trees confined to a nursing home, waiting to die. Old growth is the most vibrant and diverse forest ecosystem, with magnificent five-hundred-year-old trees, others fallen and rotting on the forest floor, seedlings, and a variety of smaller trees of numerous species stretching to the canopy among the towering old guard.

This was a hardwood upland forest of red and sugar maple, ash, beech, oaks. Yellow, black, and paper birches. Massive hickories, American chestnuts, and what we came to find, magnificent groves of ancient hemlocks. Towering above the others were stands of so-straight eastern white pine. And it was old growth and middle growth and young growth and all of the growth. The species were naturally spaced out so enough light made it down to the smaller trees, all growing together in a fertile soil of fungi and nutrients.

Naomi plunged her probe into the duff layer and her arm disappeared up to her shoulder beneath the oak and maple leaves and pine needles. She tried to pull it out but it seemed stuck as if something was sucking her down into the earth. Naomi grabbed her buried arm with her free hand and yanked. It finally gave in and popped out, covered in white strands of fungi, ants, and other crawly things and rich brown humus.

“This is wonderful,” she said. “I just love the smell of rotting things. It’s very alive.”

She placed her probe again a couple feet below the top layer. She turned to her laptop that was balanced on her backpack on the ground. With headphones, she listened.

“So much chatter. Amazing.”

Roy leaned down and tried to pull one headphone off Naomi’s ear but she waved him away. “What are they saying?”

I assembled my increment borer, attaching the auger to the handle. Time to determine the age of this hemlock beauty.

Placing the bit at chest level, I twisted the core sampler into the huge hemlock.  After several turns, Naomi flung off her headphones and covered her ears with her palms.

I made a few more turns and stopped. It was probably all I needed.

Roy and I helped her up. “Don’t ever do that again,” she said.

Holding out the core sample, I said, “What? I thought it didn’t hurt them. How will we ever know their ages then?”

“The whole network of trees was in pain.” She wiped her tears and looked around for her equipment before picking it up. “We’ll know all about them because they’ll tell us. With this.” She shook her headphones at me.

I was sorry for all the pain I inflicted during my career taking core samples, these invasive biopsies.

Recovered, Naomi put the probe back in the hole in the duff layer.

“What are they saying now?” I asked.

She took off her headphones and said deadpan, “They’re saying, ‘We will outlast you.’ ”

I didn’t know whether I was just so proud of these trees or frightened for humans. Either way, I was at peace.  I fell backwards into the soft duff and did leaf angels, hoping this would be my final resting place.

This was their world and now Naomi’s to tell us all about.

Steve Zisson is a biotech journalist whose speculative fiction has appeared in Daily Science Fiction, Nature Futures, Brain Games, Selene Quarterly, among other places. He edited a science fiction and fantasy anthology, A Punk Rock Future. He lives north of Boston.