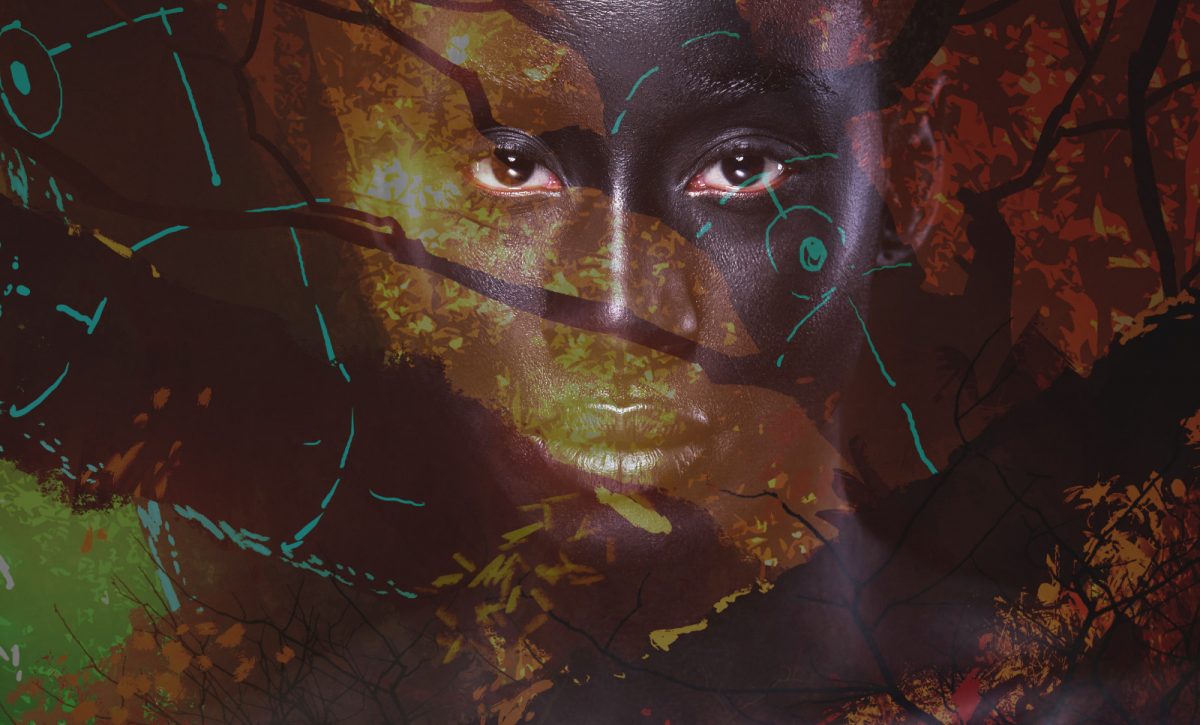 The airborne drop ship Yggdrasil, TREE class vessel, soared through the clouds of gathering CO2, claxons blaring a warning that go time had arrived. Each Planter’s indicator light flashed green in a blinking series of eagerness. Every bioengineered drop pod’s fully formed payload was ready to be fired directly into the soil of the Houston Ruination Zone. It was a forest given wings, a true World Tree within the Terrestrial Restoration Environmental Engine ship.

T-minus six minutes to launch, the onboard AI informed the crew, who interfaced with the ship and madly ran through the prep protocols for Planter expulsion. Abosede Ethreaf and the two other Gardeners jogged down the length of the hold, envirosuits growing out from the implant seeds in their chests.

The pace of the Gardeners’ motion built as the suits enveloped them, boosted by the blood slamming through their hearts and galloping through their veins. Lighter brown membrane covered Abosede’s midnight dark skin inch by rushing inch. Phil’s caramel complexion and Unnulf’s alabaster white disappeared under the same bark tones.

“Dropping in five, boys. Ready to save the fucking planet again?” Abosede called out as the final stage of her esuit subverted, then enhanced her senses. Fully cocooned, she sprinted with the rush of strength and weightlessness that came with the trickle of growth serum, Planters and crew blurring past. She revelled in it, the creeping slowness of aging forgotten.

“Here’s hoping it all goes down like clockwork,” Phil answered to her left. Volatile organic chemicals echoed his thoughts through the esuit’s connection to her mind, along with Yggdrasil’s VOCs in the background.

Both he and Unnulf kept pace with her easily, their own enhanced states making sprinting feel like a casual stroll.

“It won’t, and you know it. That is what they are having us for,” Unnulf chided, his practicality igniting hope in Abosede’s chest. She lived for this shit, and wouldn’t know what to do otherwise. Their population was too low for slackers.

Suits fully grown, the group slid to a halt, small roots at their feet joining with the bark of the inner hull’s mesophyll. Next to them a smaller pod, elephant sized instead of a gargantuan Planter, opened like the maw of a Venus flytrap.

Inside sprouted the Garden Tools, provided by WEPAN, the World Environmental Protection Agency of Naturalization. The team geared up, the AI chiming the two-minute mark. Unnulf took his massive Gatling gun and spear, Phillip his arm-encasing hand cannon and repair-kit seed. Abosede hefted her signature pair of SMGs and curved sword. All stunning grade.

“Hell yeah,” she murmured, and the other two chuckled.

She shrugged, her contented wistfulness conveyed on the VOC. “Time flies when you love what you do. Do you think about it?”

Unnulf stoically replied, “We contribute, that is enough.”

Abosede twirled and holstered her armaments. Her esuit grew around the weapons, fusing them to her body. “I hope so. It’s time. The Planters are launching.”

Assent channelled across their link, and they switched to interface with Yggdrasil directly, seeing with the senses of a flying titan.

Abosede’s worldview exploded, the taste and texture of light waves bombarding her as the TREE ship gazed down at the shattered world below. Shades, pigments, the direction of the sun’s rays painted a picture screaming in hues most people never knew.

The ship expelled the Planters, spitting them out of the organic hull and hurling them to the broken forest line. Seventeen tremendous hybrid arboreal columns pierced soil, containers exploding out as the overload of growth serum caused roots to aggressively grasp the world. Trunks soared and leaves materialized, pumping out gouts of oxygen.

The Planter skidded on the surface, furrowing the street and sidewalk it was meant to impale, trajectory terminating with it skewed and jutting up like a hangnail of failure. Yggdrasil’s voice wailed in their blood at the sight.

“As was expected,” Unnulf mused.

“Oh hell yeah!” Abosede pushed the TREE back into her subconscious.

“Shit. It is.”  She’d planned on making one of the bison-sized raccoons—her favourite mutants—a pet someday. If they didn’t settle the CO2 levels here, she’d never get that chance. “All the more reason to get that Planter fixed. Gardeners, prepare to deploy!”

Her mind sank into the ship again, instructing it to expel the three Gardeners, miniature projectiles to suture the wound below.

“Keep it tight, do no lasting harm. And above all else?” she intoned.

“Leave it better than we found it!” her team replied, as the ship snatched them, spun them, and spat them at ridiculous speeds to the wasteland below.

Unnulf and Phil exchanged chemical glances of unease as they fell, Unnulf broaching the difficult subject across their link.

“Are you sure you are up to this, Abosede? In training your reflex time—”

“Was passing, and then some.” She struggled to keep her doubt and frustration from them.

Abosede grunted, a cloud of spores conveying her annoyance as she refocused.

Seconds before they crashed to their certain deaths, their suits sprung sweeping leaves, grown in milliseconds and halting their fall. WEPAN provided the best. Humanity had learned through pain not to cut corners.

Instead, each Gardener landed, crouching and drawing weapons to deal with the onslaught of rokkoons. Slavering, frenzied from fear as the earth rippled and shifted around them, the mutants screamed and attacked whatever was nearest.

The Gardeners, ranged armaments whirring, stunned beast after beast from every direction, roots from the expanding trees churning the ground around them. Smaller tubers on their esuits’ feet let them keep their balance as they fought their way to the lopsided Planter.

A furry maelstrom reared up by Unnulf, who dropped his oversized autocannon. A vine deployed from his back caught the weapon as he drew his spear and stabbed, the stun function shrieking to life with enough power to drop the creature and send it flying six feet back.

Abosede’s focus shifted rapidly between targets, and she lost herself in the thrill of combat, knowing it was all fun and games since no one would even lose an eye. Idly, she sized up the rokkoons, debating which one she might take home and cuddle.

The team finally reached the tilted tree, Phil’s repair seed ready. Occasional blasts from his direction let them know he hadn’t been unmolested, only a slight failure on their part.

As the other two battled, Phil slammed his apparatus down into the ground. As he integrated with it, his instructions echoed in the back of Abosede’s VOC connection. Branches leapt forth, connecting with the Planter, slowly righting it.

“It’s fighting me!” Phil shouted. “We have to bail, there’s too many!”

Ten-minute window in this region, Yggdrasil sang in their veins.

Unnulf grunted, clusters of screeching animals falling comatose before him. Abosede drew her blunted stunning sword, quarters too close to aim a projectile weapon. She ignored the weariness in her arms, her esuit mitigating the lactic-acid buildup.

These animals would die if the Gardeners left. She made the call.

A rokkoon lunged for Unnulf from his blind spot. Abosede leapt, sending warnings silently along their network. She landed too late. The mutant sank teeth into Unnulf’s side and dragged him out of sight.

“Unnulf!” she cried. Phil paused, the Planter nearly in position. He looked at her, questioning.

Phil nodded, commanding the seed to surround him in a protective shell, peach-pit hard. It would last, but not long.

Abosede dashed after Unnulf’s weakening signal. Her legs like lead, she had no choice but to increase the growth serum from her esuit and risk mutation. Fatigue sloughed off, and she ran with the rokkoons, occasionally swatting especially aggressive bulls. Unnulf would not pay the ultimate price for her decision to stay, for her aging reflexes.

The swarm led her to an old Houston building, an office complex, Yggdrasil explained. Abosede smashed through walls, esuit allowing her to ignore cement and drywall alike. Nature they would preserve, the old ways could rot.

Covered in brick dust, tangy blood in her mouth, she burst into an ancient cafeteria. Surrounded by squalling young in a central pool of growth serum squatted a rokkoon that dwarfed the rest. The leaking remains of a previously failed Planter explained the density of mutants. Abosede marked it for Yggdrasil and ran on, knowing WEPAN would fix this.

Thigh-deep in chemicals, chanting a war dirge, Unnulf held off the brood mother’s spawn. Through their link Abosede felt his genetics warping. His mood was grim. He did not plan on living.

Abosede roared. This was her fault. She could not allow it.

She pushed her guilt aside as she felled the first of the charging rokkoons. These were not cuddly, but monstrous with extra limbs and pustulant eyes. She fought to reach Unnulf, hurling a vine from her left arm while her right swung almost mechanically. His own vine caught hers, and she heaved as he leapt free of the pool.

The brood mother screeched in rage, suddenly alone. She trundled at them with surprising speed, muscles rippling and changing as she went. Her DNA had to have been a mess, and they couldn’t risk further exposure.

Outside, masses of grey-black had gone berserk from their queen’s cries. The Gardeners reached Phil only yards ahead of the pursuing horde. He had gotten the Planter into position, moments away from triggering injection rockets.

“Hit it Phil!” Abosede bellowed, as she and Unnulf sped by, the rokkoon army hot on their heels.

He needed no further coaxing, setting off the explosion and joining their flight. A built-in three-second timer allowed them to put the Planter between them and furry death.

There was a CRACK!! as the tree was forced into the earth. Roots erupted outward, shockwaves sending anything nearby tumbling.

The gargantuan TREE flew overhead and tendrils reached down, bringing them back into the embrace of the organic vessel.

As the three of them were detoxed and their esuits autowithered, Abosede did her best to avoid her team’s gaze. Phil, ever the empath, brought it up first.

She yanked a shirt over her treetop-shaped Afro, nearly ripping the cloth.

“I’m getting slow. I’ve been at this too long, and now I have to choose to be useless, or get one of you killed.”

Unnulf stared at her with his oddly large eyes. “Do you suppose being field Gardener is only way to saving the world, team lead?”

They were quiet for a long beat, time cellularly bonded rendering conversation unneeded. What was she afraid of? What was she avoiding?

If she was not a Gardener, the accolades, the respect of her peers disappeared. How would she recognize her value in a world without room for anything extra?

Yet did she not have a wealth of knowledge? Did she not hold dozens of records? Maybe it was time to help the planet recover by growing more than just trees.

She smiled at Unnulf, at Phil, and shook her head ruefully. They smiled back, knowing her words before she spoke.

“But no lasting harm.” Phil winked.

“And above all else, Gardeners?” Unnulf intoned.

“LEAVE IT BETTER THAN WE FOUND IT!”

Please fund more great stories like this by joining us on Patreon or buying our latest anthology. 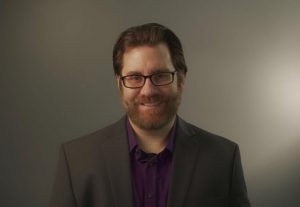 Liam Burke is an independent author with a penchant for a variety of speculative fiction. His main passion is for juxtaposing biting humour along with the sharp teeth of horror, razor code of cyberpunk, and back alley deals of urban fantasy.

He spends any free time he can either crafting stories with his friends, at the mercy of small plastic polygons on a table, or slaying digital baddies in computerized dimensions. He is a member of the Brooklyn Speculative Fiction Writers group, and possibly several secret societies plotting world domination. Or snack eating. One of those.