The Desert in Me
Priya Chand
Fiction
April 24, 2020
Free The Sky
Wendy S. Delmater
Fiction
February 26, 2018
Sweeten the Deal
Dan Micklethwaite
Fiction
April 9, 2021
The Way of Water
Nina Munteanu
Fiction
January 25, 2019
Flight of the Storm God
Mike Adamson
Fiction
June 25, 2021
What can we get you? 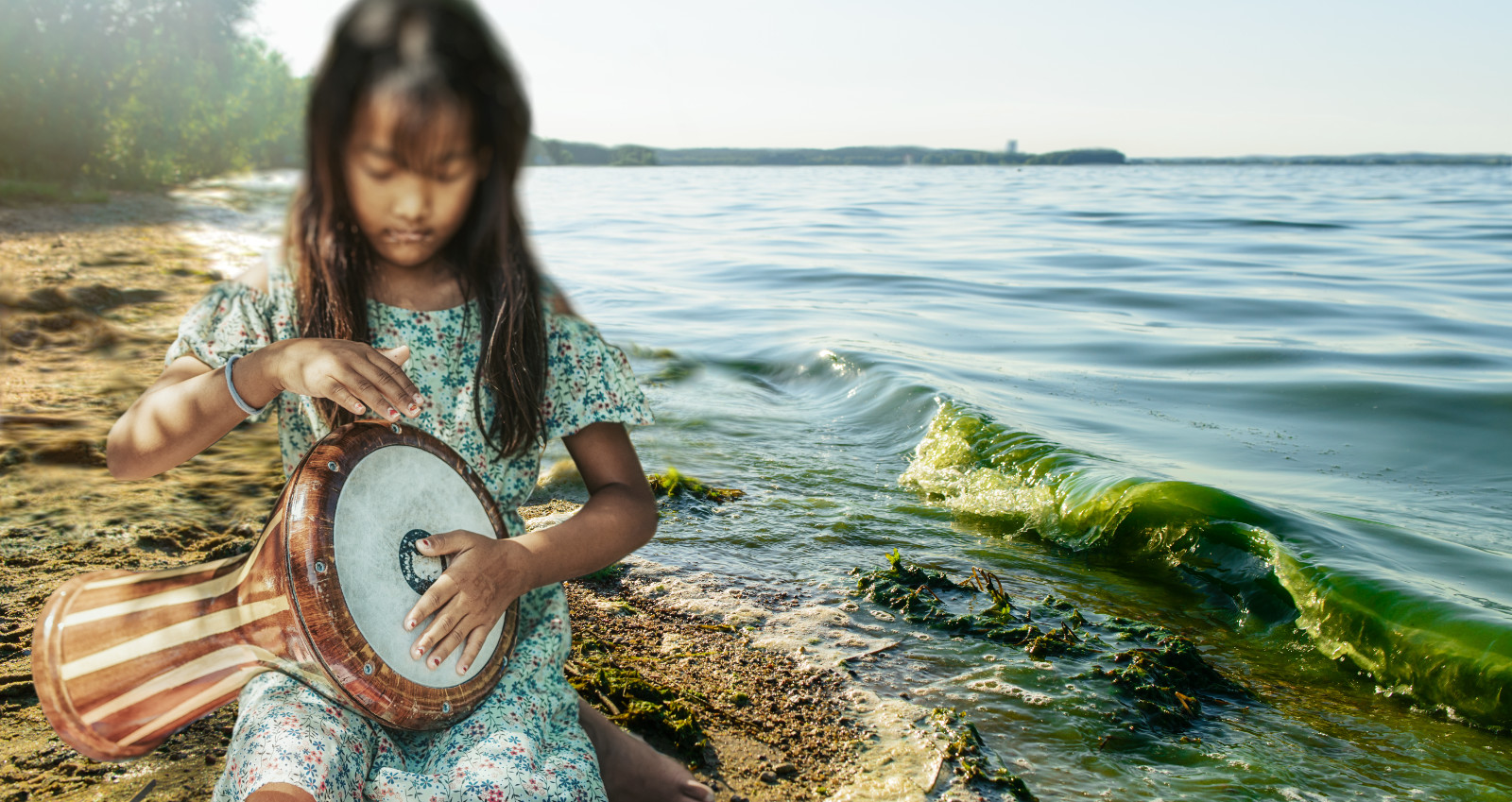 No one really knows where oceans end and where they begin. Sometimes there is a hulking piece of earth in between, but there is no barrier between the Pacific and the Indian. The waters there are blue abysses, no land masses abruptly halting flow. There are archipelagos stretching from the tip of Asia to the top of Australia, but they sit within water that has existed since the formation of the earth.

On one of those archipelago islands, a little girl beats her drum. Her father made it for her before he left for the bigger island, searching for work and money to send back home. She has not seen him in nearly two years, but the teak-wood instrument reminds the little girl of her father’s heartbeat. When she was a babe, he used to hold her against his chest, and she would fall asleep to the soft thrum of his heart. Even now, every time she falls asleep on her cotton mattress in the room she shares with her siblings, she taps out the rhythm on the siding of the little drum.

In the morning, her older sisters wake the little girl up before leaving for work. They make and sell jewelry to the tourists who like to admire the mango forests. Every year, the trees dwindle in number as new farms are built to provide food for the foreigners and the mainland.

The little girl is usually left to her own devices. Her sisters have work, and soon she will join them, but the little girl does not dwell on that fact. She simply hugs her drum in close, and beats it on her part of the beach.

Of course, it is not her beach, but the tourists stay away from the areas where green algae carpets the water’s surface, so it is devoid of other people when the little girl arrives. She sets up her drum and listens to the lull of the tide. The seafoam brushes against her feet as waves crash down upon the sand, washing away the little girl’s footprints.

Not so long ago, but long enough ago that the little girl does not remember, there used to be fish in the water. Her father used to hoist her baby body on his shoulders, and he would teach her arithmetic by counting the bright yellow fish languishing underneath the sun. Now, the little girl cannot see those fish so easily. Fertilizer runs down the island from the farms to the coves, the ones the foreigners do not enter.

She practices rolls, her palms beating as quickly as hummingbird wings to buzz the sound outwards. For a moment, she forgets about the future she will have to partake in. She forgets about the tourists milling about the island. She even forgets about her father, his kind face that left so many years ago. She remembers the ocean. The water calls to her, licks up to reach her toes. For a moment, the waves move in time with the little girl’s drum, stirring up the algae and letting a little bit of sunlight through to the bottom plants.

Eventually, night falls, and her older sisters come to the beach where their little sister plays. Before they take her home, they sit on the sand next to her, listen to the beat of the drum. They remember when the water was clear blue, not obnoxiously green. And the problem has been spreading. Fewer tourists are coming as the ocean no longer remains crystal clear and the fish are no longer as vibrant and numerous.

They don’t speak of their worries to their little sister; they would like her to be little forever because to them, it seems as if growing up only makes things worse. Summer monsoons have increased in frequency, the farms have cut down more and more trees, their father sends less money every month. They remember how it used to be, and they cannot figure out a way to reverse the passage of time.

The little girl plays a new song for her sisters. She tells them about the ocean, and the new techniques she learned that day. She tells them about gossip she heard through the sea breeze: there was a way to stop the algae from invading the waters. Seedpods are buried deep in the sand where they will never grow. But they can flourish in the dirt beds at the boundary between shore and mango forest.

Her older sisters exchange a knowing glance. They decide to humour their sister, and together the three of them dig in the sand. The seeds are there, just as she said. They take the small nondescript nuggets of life and bury them in the fertile soil.

“When Father comes back, I want to show him the sea. I want the water to be blue,” the little girl proclaims when they finish planting the seeds.

Her older sisters say nothing.

They walk back home, eat dinner, and the day repeats itself until one day, the little girl is not so little anymore. She never forgets her drums or the little patch of shore that was hers alone, but she has to buy food and pay rent, so she spends her days with her sisters selling trinkets to the tourists who remain. Their father stops sending money, and the girl knows she should let go of the promise, focus on tangible needs instead.

Still, there comes a day when business is slow. She finds herself wandering back to her beach. New acacia trees and flowering shrubs line the shoreline. Bright birds roost in their branches. Things have changed since she last played her drums here.

The water at the beach is also different. The green algae has thinned, and the girl can count the tangerine-coloured fish swimming just under the surface. Something in the girl’s heart swells as she remembers that day with her sisters. Perhaps the sea breeze was right, and it wasn’t just a little girl’s futile dreams. She doesn’t have to wish the water blue for only her father’s sake.

The girl searches in the sand for more seeds, and she spreads them in the soil all along the edge of the island, even venturing out to the beaches where tourists frequent. When her sisters come and ask her what she is doing, she only holds out the seeds.

She tells them to go look at her little strip of beach, how clean it seems now, how full of life. She says, “Though I cannot remember when there were plants in the water other than algae and the fish didn’t wash up on shore dead every summer, I know that our future does not have to stay that way. The task is endless: tomorrow I bring my drums to the farmers about using less fertilizer.”

Her sisters look at their baby sister: how did she grow up so wise? Once she has finished planting all the seeds, they ask her if she could play the drums for them.

The girl obliges, smiling as she touches the teak-wood instrument. She taps it gently with her fingertips at first. It has been a long time, but she remembers. She plays a song for her sisters, and the ocean calls her again. The waves crash to her rhythm; the tide sweeps against her feet.

On an island in between two oceans, a woman beats a drum, and the water whispers its thanks.

Composite by Katrina Archer from Depositphotos

Ashley Bao is a Chinese-Canadian-American high school senior. Her poetry and short fiction have appeared in Reckoning, Strange Horizons, Cast of Wonders, and elsewhere. She may sometimes be found looking at cute cats on Twitter @ashleybaozi.