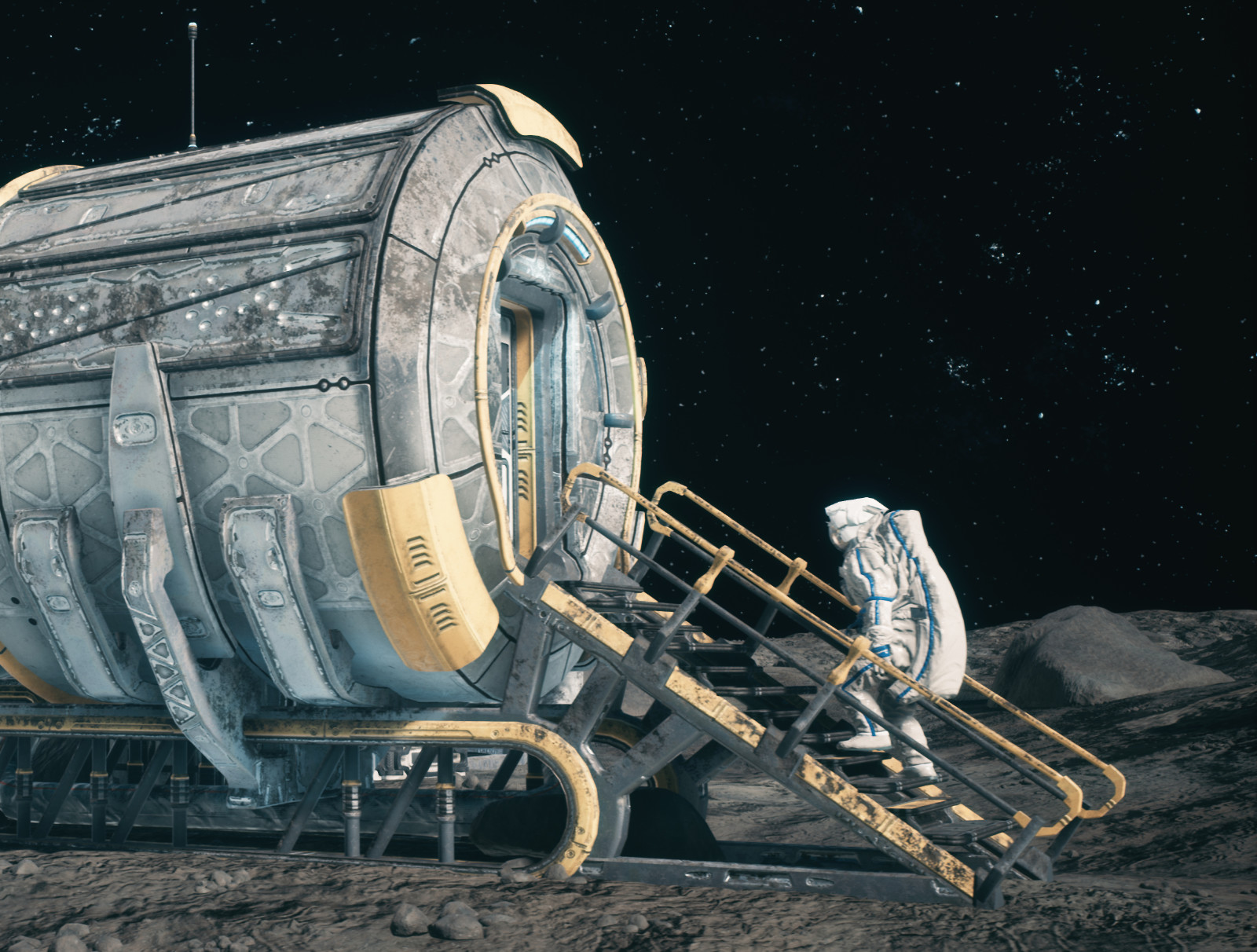 It was called Moon Base Daintree, but it was less a base than a tube. A long, subway-car-sized tube, with a hatch at either end.

Inside was a conference table, life support, and a fridge filled with refreshments—in case the alien was humanoid.

Preston Jorgenson paced his end of the tube as the alien ship completed its intricate docking procedure at the other.

There was, certainly, a lot riding on this meeting, but Preston was sure that nobody else on Earth had his acumen or negotiation skills.

He knew he would get a deal done.

The alien made Preston nervous, though. Their civilization had sent humanity nothing but audio communications so, for the first time in decades, Preston wasn’t much better informed about what the future held than anyone else back on Earth.

What would he or she look like? Preston wondered. Would it be a terrifying xenomorph like in Alien with sharp edges and spikes, or a gorgeous green-skinned woman like the Orion girls in Star Trek?

This visit was to determine whether the aliens would share their technology. They claimed they could help humanity repair the earth, enabling it to survive the climate apocalypse already in full swing. Or they could abandon it to its fate.

“Your society will need to band together, pooling its innovation and its resources, to build a base on your moon where you will meet our emissary in three years’ time,” said the synthesized voice at the end of the alien message, which they broadcast globally, in all languages, nearly thirty-six months ago.

When Preston heard that message, he knew what he needed to do. Governments had been completely ineffectual in dealing with climate issues. Preston was the world’s first trillionaire. Without the help of the aliens, he would probably be its last.

“I’ve never been a big fan of ‘pooling,’” he had said at his press conference the next day. “As you know, I’m an inevitablist. If something is going to happen, if it’s unavoidable, I believe you need to embrace the change, even if it’s painful or disruptive.

“Representative governments don’t have the resources, efficiency, or innovation to handle this mission,” Preston continued. “It’s inevitable that a private enterprise will take the lead. As CEO of Daintree, I feel like this challenge falls to us in particular. We will build the moon base and deliver me there as Earth’s emissary in three years’ time.”

Since then, the creation of the Daintree moon base had progressed at a breakneck pace.

There was some pushback by world leaders and governments angry about Daintree relegating them to the background or shutting them out completely.

“You’re free to build your own rocket and your own moon base,” Preston had told the president and the Joint Chiefs of Staff in one of the early planning meetings. “But don’t expect Daintree to give away its skills or resources to the competition.”

After Preston brought intense lobbying and other pressures to bear, the U.S. government and all the rest eventually fell into line, giving him the tax breaks, the clearances, and everything else … right down to the naming rights on the station.

That’s a billion-dollar piece of marketing for Daintree right there, Preston thought. I might even turn a profit on saving the world.

The clanging of the alien ship docking with the moon base had stopped. Preston considered putting his hands down on the meeting-room table, pushing his upper chest forward, and spreading his legs slightly in a pose that conveyed confidence and power, like a potent, silverback gorilla.

Maybe just a bit too aggressive, he thought.

He adjusted, putting his left hand flat on the table, and the other on his hip, turning his head slightly to the left, like a majestic swan. More casual. But perhaps giving a hint of impatience.

Preston went to adjust again but, midgesture, the alien’s hatch opened, startling him, and leaving him, for a fraction of a second, in a pose like a frightened donkey.

“Hey there handsome,” the alien said.

He was neither a xenomorph nor a green-skinned girl. He was Preston. Same face. Same body. Same voice. Even the same stylish space suit that Preston was wearing now.

“It’s probably a bit disconcerting to see a duplicate of yourself,” the alien said. “They custom design the emissary to match the representative they’re speaking to. When they made me, they toyed with the idea of making me look like your father, or some other loved one to put you at ease. The computer determined that this image was the one that you had the most positive associations with, so we went with it.”

“What … what are you?” Preston asked. “Does your species shape-shift?”

“What? Me? No. I’m not one of … you know. Them.” The alien gestured towards his end of the tube, and the ship. “I’m a single-use organism. They designed me using your genetic code to negotiate just for this meeting on their behalf. My mind, such as it is, uses an analysis of every public interaction you’ve ever had, and every electronic communication—every record of everything that you’ve ever said or written, public and private. If I may, I’d just like to say how much I enjoyed your autobiography. The Inevitablist—great stuff!”

“Mostly.” The alien shrugged. “Who knows? Does anyone ever really know anyone?”

“To be clear, you’re authorized to negotiate on behalf of … I don’t know what to call them.”

“Doesn’t your creators’ species have a name?”

“Well, I guess that means all my fancy negotiation strategies go right out the window.” Preston relaxed a bit.

Then, he tensed: “Look, you know me, and you know our situation. It’s dire. Please … please help me. Help us.”

“I appreciate you worked hard to get here, and to create this … tube.”

“It’s a moon base!” Preston couldn’t help getting a bit frustrated. Wired Magazine had derisively called it a “tube” as well.

“Moon base. Yes. As I said, you worked hard, so we came here out of respect. But we were pretty clear with the directions. You didn’t follow them. So I’m afraid the answer is no.”

A silence settled into the hollow space, interrupted only by the sudden humming of the machine that recycled carbon dioxide back into breathable air.

“I’m afraid the answer is no,” the alien repeated.

“But we did what you asked.”

“The exercise was designed to force the disparate peoples of Earth—across cultures, across geographies—to work together, sacrifice together, and innovate together to create a technology here on the moon.”

“We did that. We just did it with Daintree,” Preston said.

“Yes. Getting the naming rights was a nice touch,” the alien said. “But creating a tube … I’m sorry. I meant ‘moon base’ … having it done through a for-profit entity under the direction of one man defeats the whole purpose of the exercise.”

“What difference does it make who built it, how many, or where they’re from?” Preston asked.

“You know, we have the technology to fix your planet, but you’ll be back in the soup again in two hundred years unless people stop being so selfish, and work together,” the alien said. “This moon base exercise was meant to be the first step—an important signal that humanity was ready to make the change. But you couldn’t even do that right.”

For a moment, Preston was without words.

“Look,” Preston said, “humans may not be as technologically superior as your people—”

“You’re not,” the alien interrupted.

“—but we have art, film, music. Our diversity and beauty could add value to your culture.”

“Humans are also arrogant, resentful … dangerous,” the alien said. “I’m pretty sure that your diversity and beauty are not worth the risk.”

“We have to have something you want,” Preston pleaded. “I mean … water? Air? Gold?”

Now it was the alien’s turn to pause.

“Yes.” The alien sighed. “We do value those things. And I hate to be mean, but why barter with you people now, when we can just, you know, wait”—the alien took out a sheet of paper from his pocket—“thirty-two years? That’s how long your species has got. After that, we can just come down and … well … take it.”

“That’s bullshit! We’ll survive. We’ll fight you!” Preston collected himself. “We can change. We’ll pull together and do what we have to do to survive. We don’t need you.”

“Listen, Preston,” the alien said. “You’re me. And I’m you. So, believe me when I tell you this doesn’t make me happy. I love you, man. I love all humans. But the fact is, this was kind of the last chance. And it feels bad to feel like you’ve blown it. I get it …”

“Please,” the alien said. “Let me finish. Like you said to the president: nobody would have even made it up here to the moon if it wasn’t for you. And, so, in a way, you’ve shown that you’re a boss. That you will rise to the top even in the most difficult situations. Even when there’s no chance of winning.”

“Is there anything? Anything at all we can do to show you that we’re worthy of your help?” Preston asked.

“I guess you can say I’m an inevitablist too,” the alien said. “There’s some painful, disruptive change coming. The best thing you can do right now is to embrace it.”

“You’re me, right?” Preston asked. “Look, man, do me a solid. You’ve got to give me something. Something I can take back to Earth.”

The alien Preston stared at him for a long while. “Obviously, the truth isn’t going to fly.”

The alien moved towards the hatch to his ship.

“Honestly,” the alien turned back suddenly. “If I were you, I’d say that the aliens are sending help but in the meantime, you’re giving everyone a $20 gift card for Daintree.”

Preston laughed without mirth at his counterpart’s insight. Free stuff and a few words of hope were probably all it would take for everyone to embrace the inevitable.

David Lee Zweifler spent decades writing nonfiction in jobs that took him around the world, including long stints in Jakarta, Hong Kong, and New York City. David's work appears in Little Blue Marble, The Dread Machine, and Wyldblood, and he has upcoming stories in Analog and Shortwave Media's Obsolescence anthology. His website is davidleezweifler.com. His Twitter handle is @dzweifler.