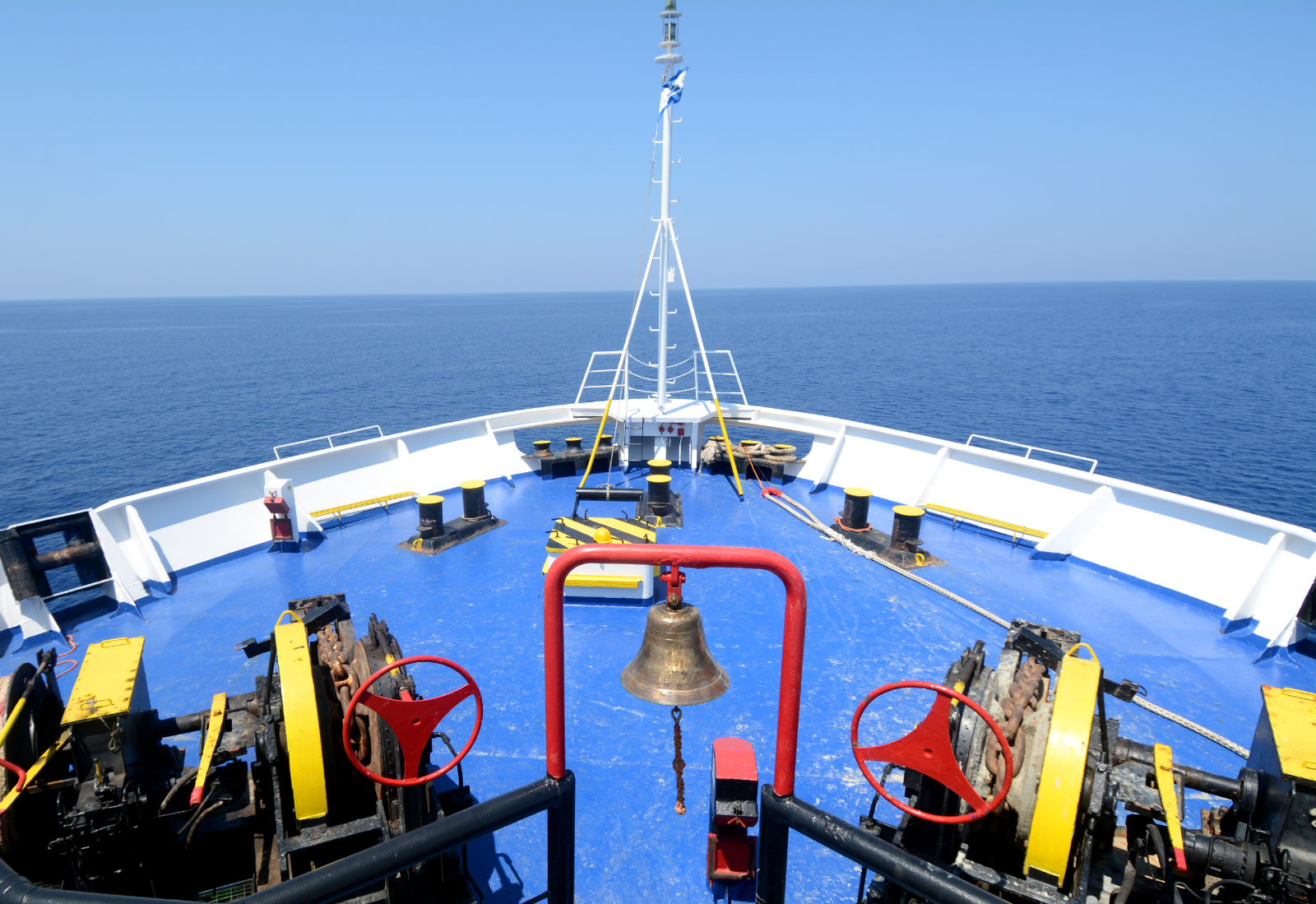 The Trials of the Thorsten Haugen

Captain Matt Peasley paced the bridge of the bulk carrier Thorsten Haugen, his low-top hard-sole shoes wearing a path on the painted deck. The relative quiet of his ship, compared to times when its engines ran at full throttle, unnerved him. Speed mattered in the shipping business, and in the past, the thrumming of the turbines had reassured him that the old girl would deliver on its promise of profit.

Outside the window, on the sun-drenched weather deck that stretched 200 metres to the bow, four newly installed wing sails offered no such promise. At least not yet.

Matt sipped his scalding cup of black coffee. He glanced at the navigation console, the radar image showing the California coast thirty kilometres to starboard. The speed read 10.5 knots. He let go a heavy sigh and ran his fingers over his walrus mustache, pulling gently on the salt-and-pepper hairs, a nervous habit. He keyed the walkie-talkie hanging on his yellow safety vest. “Sally, can you come to the bridge?”

Beyond the bridge—the brain of Thorsten Haugen—the sight of the wing sails rising eighty metres from the deck like giant playing cards put Matt in mind of his great-grandfather Ambrose, founder of the Peasley Line. He wondered what the old man would’ve made of the airfoils designed by his great-great-grandaughter, Sally Peasley. A. A. Peasley was one of the last Down East sailors, trained on the water from age fourteen. He knew wind and sea as well as the albatross and dolphins he called his shipmates. Almost two centuries had passed since the line’s founding after the Civil War, but the necessity for profit hadn’t changed. Without it, a man’s work was a slow spiral to failure.

To make a profit, Ambrose took risks. His was among the first shipping companies to switch operations from sail to coal-fired steam. Matt’s refit of the Thorsten Haugen to meet the demands of a warming world risked everything Ambrose and his descendants had built over five generations.

“Yes, Dad?” Sally appeared next to Matt, breaking his train of thought. “I’m coding a few changes to the trim algorithm.”

“I need at least another knot and a half out of those sails.” Matt gestured forward. “Otherwise, this little experiment won’t work.”

“I'm doing everything I can.” Sally’s voice rose. Her shoulders shifted in her oversized coveralls. “The system works. I just need to tweak it.”

Two years previous, during Sally’s presentation of her refit proposal, a board member wondered whether her simulation could predict actual results on an ocean that didn’t care about software or statistics.

“We’ve got three hours left in the test, Dad. We’ll meet the benchmarks.”

“It might be three hours until I have to tell the board that this whole project is done and the company is done. We can’t go back to bunker oil. How are people supposed to get their AI-powered Chinese washing machines or mind-reading teddy bears for the kids?”

“We’ve talked about this a hundred times. This is our best chance to cut our fuel use and emissions and keep the government happy.”

“It doesn’t mean a damn thing if I can’t get this old girl to go a little faster.”

“You care only about speed, Dad. I’m doing this to save the planet.”

“That’s not fair, Sally. I care about the planet too. But everyone’s got to make a living, and right now, I feel like mine is slipping away.”

Matt’s throat tightened and his face flushed. He was master of a modest, proud shipping line, and he hated to show the kind of emotion that others might take as weakness. The bridge crew stared ahead, but they were listening. They worried about their jobs, and so did he. He cleared his throat and took another sip of the now lukewarm coffee.

Sally touched his arm. “Dad, we can do this.”

So much confidence in those steel-grey eyes. That was one of the things Matt loved about his only child. Sally’s mother Annie had given him a gift beyond treasure. Sally put her Berkeley education and her talent for machine learning to work designing a wind-assist system that just might save the family business. Matt understood nothing about the technology, beyond the basics of how wind flowing over an airfoil pulled a ship forward. But when Sally spoke of the promise of wind in the twenty-first century, he heard Annie’s voice. He could do nothing but acquiesce. It helped that the numbers added up, at least on paper. He only wished Annie could’ve lived to see the result.

Matt faced his daughter and spoke quietly. “Yes, I know you can do it, sweetheart, but we’re running out of time.”

Don’t worry! How is that possible? The worry started the day his father died. One moment Matt was playing shortstop on his college’s basement-dwelling team, the next, he was the heir to a shipping company barely holding its own. The board wanted him to take over, but he resisted. Do I want Father’s tantrums, his eighty-hour weeks, the high blood pressure that killed him? Then Matt met Annie, and the world was lighter on his shoulders, more manageable, though the worry never went away.

A quarter century later, the final challenge arrived with an email from a government friend. It warned Matt of the regulation about to be published in the Federal Register applying the new carbon tax to bunker oil, the life’s blood of ocean shipping. The new tax burden would kill the Peasley Line, unless he adapted.

Matt remembered standing in front of a life-size portrait of Poppy Ambrose in his high-pressure cap and determined expression. He asked the old man, What shall I leave to Sally? Failure? Or something new?

Sally gave her presentation to the board with Ambrose’s portrait behind her. The Peasley Line would install her bespoke wing sails on Thorsten Haugen, the oldest ship in the fleet, and give it new life. Her engines would remain, but they’d only be used when winds were unfavourable or to maneuver in port. Matt swore the old man nodded his approval.

The recirculated, homogenized air of the bridge felt as oppressive to Matt as the stale coffee. Donning his hard hat, Matt stepped out on the bridge wing into the sunshine. On land, the sun would’ve burned like an oven, but at sea, the wind softened its heat to a pleasant warmth. Matt lifted his binoculars, scanning the weather deck with its red hatches. The wing sails added grace to the otherwise workmanlike lines of a ship never meant to host wind power. He inhaled the same air Ambrose might have breathed, watching a gull hover over the nearest sail, the bird enjoying the vortices that spun off its tip. He envied the bird its freedom.

“Dad,” Matt’s radio squawked. “Bring Haugen into the wind a degree. We're up to Force 5. That’ll give us more energy.”

Noting how the wind took the tops off the waves, Matt gave the order. Almost imperceptibly, the Thorsten Haugen changed course, and Matt saw the wing sails’ flaps adjust. He felt the change in his legs, spread slightly to maintain balance as the vessel rode the long swell. Matt ducked back into the bridge and watched the ship’s speed rise. In a few minutes, it plateaued at 11.9 knots.

Matt grinned at the helmsman. “The old girl still has some kick!”

An hour passed, then thirty minutes more. Matt was elated. This damned thing might work, he thought. Then, just as Thorsten Haugen glided past a headland off her beam, the wind dropped perceptibly. The vessel’s speed slowed to 11.4, then 10.5, then a paltry nine knots.

The clock showed the test was done.

Sally appeared, her stricken face revealing her fear and disappointment. “Dad, I didn’t expect the wind to drop off like that. The forecast—”

“I’ve never known a marine forecast worth the paper it’s printed on,” Matt frowned, feeling as if he’d just stepped off a roller coaster. So much of life on the water was unpredictable. But if family was steady, if work gave you satisfaction, and you could enjoy a sunrise on the open water, then all was well.

“I didn’t keep my promise. Twelve knots for two hours. What will you tell the board?” Sally’s eyes glistened.

Matt glanced into his empty coffee cup and sighed. He imagined himself delivering the news to the board; he wouldn’t let Sally humiliate herself. She’d worked too hard, and he still believed in her. What’s more, he wasn’t ready to give up just because an arbitrary measurement didn’t come out quite right in a world where uncertainty was the norm. He’d do the human thing and take the risk.

“You’re forgetting something, sweetheart. I’m the captain of this ship, and I decide what is success, and what isn’t.”

“I’m calling the sea trials of the wing sails a success. Maybe by a hair’s breadth, but a win is a win.”

Sally hugged her father, and Matt, watching the growing smile on the helmsman’s face, let himself return the embrace.

“We do have to fix one thing aboard this ship,” Matt said. “This coffee has to go. Poppy Ambrose would never allow it.” 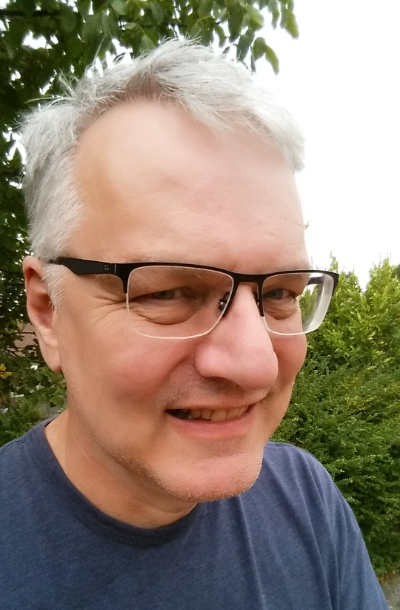 J.G. Follansbee is a Seattle-based writer published in Bards and Sages Quarterly, Children, Churches and Daddies, and the anthologies Satirica, After the Orange, Still Life 2018, Spring Into SciFi 2019, Rabbit Hole II, Sunshine Superhighway, Fix the World, and Extinction Notice: Tales of a Warming Earth. He is the author of the series Tales From A Warming Planet and the trilogy The Future History of the Grail. He has won several awards in the Writers of the Future contest, and he was a finalist in the inaugural Aftermath short story contest. He also has numerous non-fiction book credits.