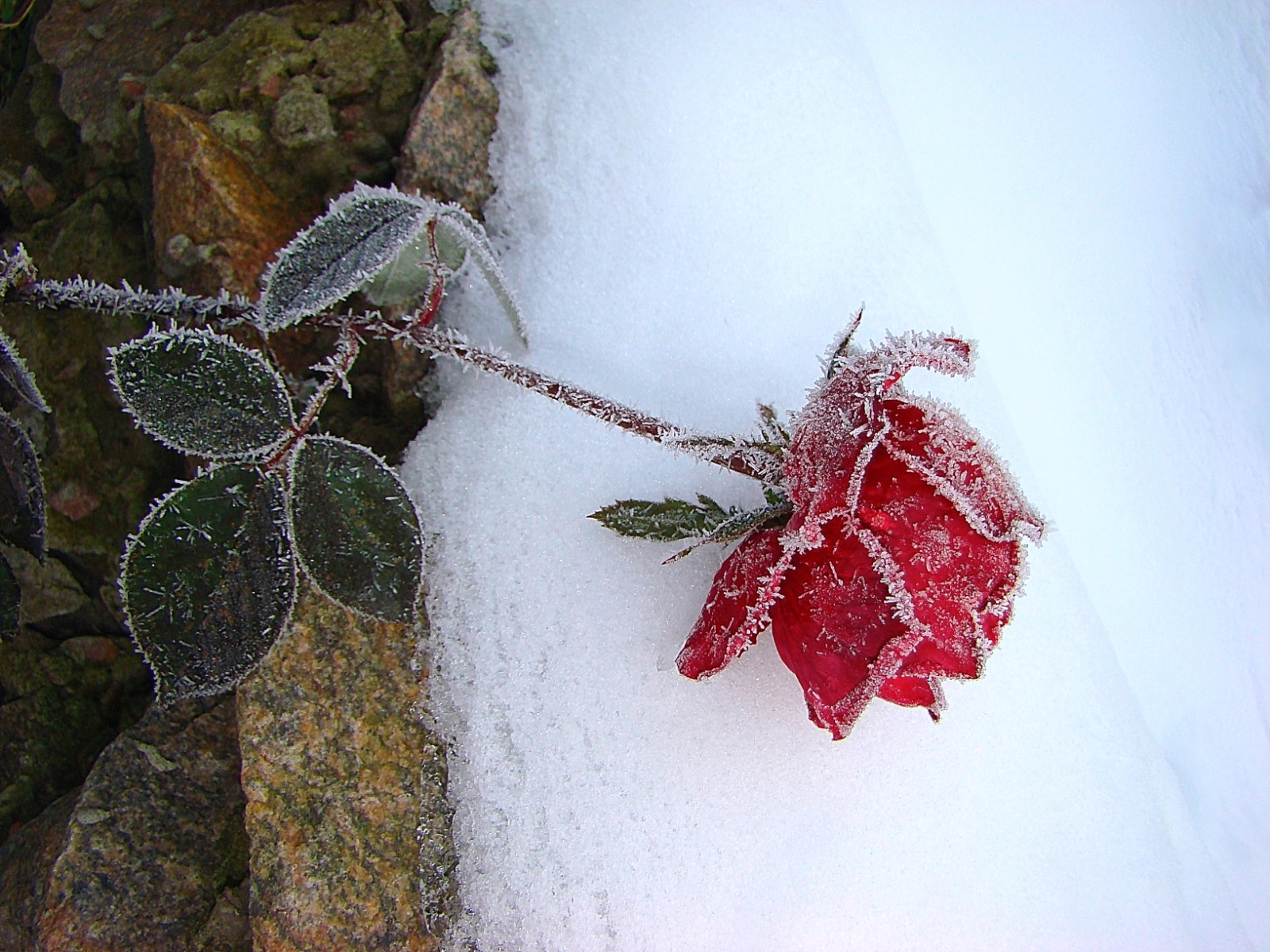 I’m alone now, except for Mother’s whispered reassurances that this is what’s best for us all.

The long night brings with it many memories: the sunlit park, the clouds bullied from the sky, leaving nothing but uncluttered blue and my true love.

“I’m leaving you.” She sat next to me on a park bench in a yellow dress. Her hair golden, mouth a quizzical shifting horizon unable to decide how sad to be at the words she had just spoken.

Looking out at the grey winter blanket above, it is hard to imagine how a sky could ever have been so blue as it was on that day. The greens are gone forever, the greys in charge, and the long night is everything.

“We don’t belong together,” I said, my tongue too thick as I spoke the oft-repeated farewell.

“The spirit of summer and the dead of winter. Not exactly happy-ending material.” Her eyes were misted, but her voice clear and fluid. How it cracked and warped and wept as Autumn took her hand and led Summer away later that day.

Autumn, a cool loner, aloof and understated, sat beside me when he returned. “Some rules don’t change,” he said, voice a gravel pit, eyes ringed with black. “No matter how much they fuck her up, Mother decides when Summer leaves.”

The park still buzzed with children and parents orphaned from reality on their phones.

“Look at them. They don’t care that she’s gone, as long as the sun still blazes, and they can top up their tans, and abandon their offspring to its warm kindergarten. It doesn’t matter that the true Summer no longer kisses their cheek. It’s their neglect of our Mother that keeps them warm when they should be feeling your chilly breath.”

Autumn sighed. “At least I still get to skin all the trees alive, eventually.” We laughed, possessed, as we were, by the same sense of humour born of these shortening days and lengthening nights.

I miss Autumn. He was not one for long conversations, but his gloomy outlook matched mine, and he was my link to her.

Created to come and go long before me by our benevolent Mother, Summer was long kept apart from me. Our first meeting, many thousands of years ago, was an anomaly, a quirk of the Mother, not some later perversion of humanity.

I woke, bewildered, lost, and out of season. Summer sat naked in a field of grass. Naked was the norm then. “Oh, hello,” she said, as she squinted at me in the rays of the glory that was the midday sun. I sat up, hand on my cheek, the heat alien on my skin.

“It’s warmth. Haven’t you ever felt it before?”

I shook my head and stood. My legs were weak. I was suddenly aware of the concept of nudity as her smile widened. I was naked and so was she. We looked at each other.

“You come from a cold place.” Her giggle added gleeful punctuation to her words .

It’s always dark now. The memory is colder than the shadows on this December night, a few days before Christmas .

When the end came, I settled in the southeast of a small island. There is just me and Mother left. She is distant, stern, and yet still loving.

After my first encounter with Summer, our meetings became more frequent. I was around for a few days in July one year, I spent a week in May with Spring waiting for her while killing lambs and daffodils with a sharp frost. It was not my cold heart, nor Mother’s will. It was the damn mouth breathers.

They loved their cities, inventions, and so-called progress so much that they never once saw Mother’s disapproving frown, or if they did, they just ignored it, denied it, and carried on.

Before the turn of the twenty-first century, Mother used to speak to her four children, but since the start of that new millennium, she had become silent. Autumn thought she was dead. I refused to believe that.

“That outfit isn’t going to work in this heat,” Summer said as I awoke. This time I was in the gutter and she sat on a wall opposite in white shorts and a New Order T-shirt. It was 1989.

I got up and sat beside her in my thick black woolen jumper and midnight-blue jeans. It was dark, but barely. Summer owned the night with her humidity and that sticky feeling that the sun never really gave up the sky at this time of year.

I pulled off my sweater. “Does it have to be this damn hot?” I asked, my mood grouchy at being pulled from my slumber for an August snowstorm.

Summer leaned in and kissed me. “Miss me?”

I pulled her close and returned her kiss. I thought I heard Mother grumble in a thunderhead in the distance, but she was never one to interfere. “How long has it been?” I asked.

“Twelve years.” She put her hands around my neck as we settled in for a smooch.

“The gaps are getting shorter,” I said between kisses.

“Why doesn’t Mother do something? Another ice age. A clean slate.”

I couldn’t help but smile at Summer suggesting an ice age, but there was no humour in my heart. “It’s never been her way,” I replied. “They’ll be gone soon enough and she’ll repair all they have spoiled.”

I stayed too long that summer of ’89. Right up until the Reading Festival. The year it went from metal to indie and it rained like a bastard.

By Christmas 2019, the heatwave of the previous year left me sleeping until my appointed day. It was still warm enough to be haunted by Summer’s lips against mine, by the smoothness of her skin made silver by the moon, but as soon as I saw Autumn sat at the foot of my bed I knew I would not be seeing her this year.

His long hair, unkempt as always, his brown eyes sorrowful and wide, he waited for me to shake off my sleep. I sat up. “December already?” I asked.

He nodded. “Heatwave. I’ve barely started on my tasks. A huge backlog in the buttercup cull. Man these fucking mammals are screwing with my schedule.”

“Exhausted.” He frowned, his mouth turned down. “I’ve got a message from her.”

“OK, I understand, now will you tell me what she said?”

“By the holy Mother, just tell me!”

Autumn spoke Summer’s words. “My love, this heat is not the tenderness that Mother first bestowed on me. It’s a shrill thing, a brittle attack of Celsius. I miss the coolness of your skin and the chill of your lips. I fear our days together may be ending. I fear my heart will soon be empty of everything but this murderous heat.” Autumn coughed and made a hurried exit.

Those early days of the twenty-first century seem so long ago now. I have not seen my love for centuries. The mouth breathers are all gone, swallowed in the vengeful fever of her hollow heart. It seems that Mother was not so reluctant to act after all.

All it took was a manufactured meet-cute and the willful ignorance of humanity to create a doomed romance where we saw less and less of each other and, in the end, a brokenhearted Summer erased Mother’s enemies from the earth. I was angry when I realized how Mother had used us to wipe out humanity, but now I see it is for the best.

When my lover expended all her sadness, mine followed. The planet is now blanketed in ice and darkness. I will protect it until Mother has repaired and recast it once more. The blank slate where life will flourish anew, hopefully in a wiser, more respectful form than what went before.

For new children to be born the old ones must die.

I am the last of the first. Spring, Autumn, and my beloved Summer all are dead, to be reborn once Mother has reclaimed all that was taken from her. On that first day, the long night will be over, and I will find my rest, and I hope the warm embrace of my true love.

Gary Priest writes short fiction and poetry. He has over thirty publications online and in print including Daily Science Fiction, The Eunoia Review and Literary Orphans. He lives in the UK at the end of a dead-end road, which may explain everything.