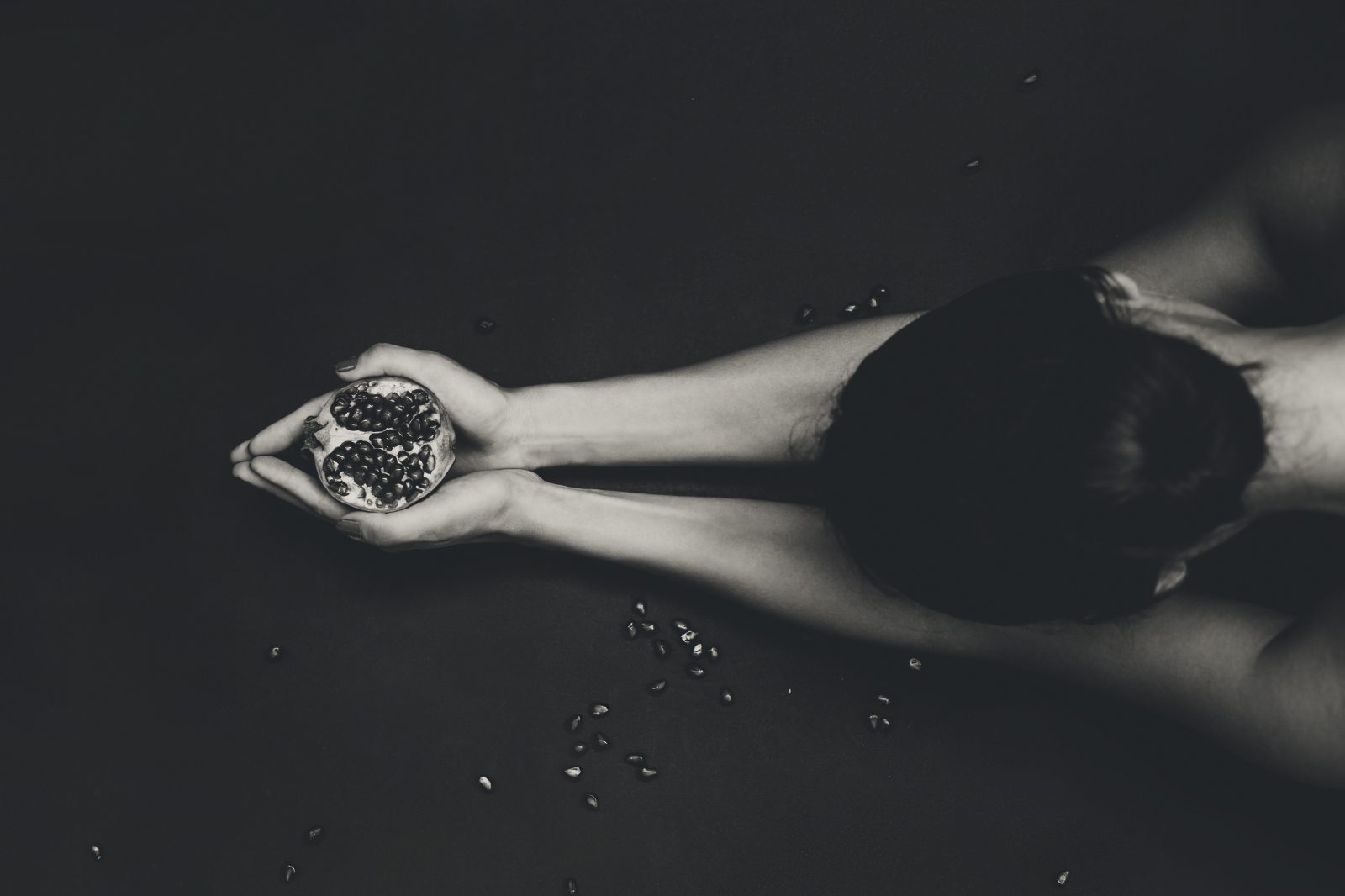 Demeter Seeks Persephone in the Year 2210

We, the chorus, welcome you to today’s stage, a patch in the rocky landscape once known as Attica.

Close your eyes and inhale the subtle sweetness of sun-warmed grass. Hear the soft rustle of dresses, giggling young women whose whispers counterpoint the chirping birds. Soon you realize there’s no variation in the birdsong, and the thought startles you into opening your eyes.

Our setting is a notch between skyscrapers. It’s beautiful, in the way of the well-engineered: sunlight beams in via mirrors, splashing light across the grass, which slopes gently so as to minimize echoing. To one side is a tree, which cradles a nest that holds a single bird.

And the women, comparing holograms of flowers on their phones, wondering if any might sprout in this thing humans call a “nature preserve,” having forgotten that Bermuda grass is as unnatural to this continent as concrete and plastic.

One of the women is distracted. Persephone’s eyes keep slipping from the pictures—“How nice,” she says, to a half-dead spray of weeds as her friends swipe through the images, no one remarking upon her absentmindedness—and then her back snaps straight, eyes focused forward.

A shadow sweeps across the meadow, a half-second glitch in the sunbeam reflectors. When the light returns, Persephone is gone.

We wail, we lament, we fill the silence left when the startled bird stopped its tinny song.

Her friends continue chatting, and for the first time you wonder why they’re so intent on the details of extinct flowers. For the first time you see sweat sheened on their foreheads, a drama reenacted at gunpoint, every syllable as deliberate as the geoengineers’ rain bullets.

Daughter of laughter, we sing, daughter of Demeter. Here she is, where we have found her every year since the beginning of time.

The dog(s) recognize her. “Kerberos, down,” Persephone says, laughing, patting her pockets for treats she didn’t bring, not knowing when she would return. She presses her hand to the ground, shapes a ball, throws it into the grey-lit distance. Drooling joy from all three heads, he scampers after it.

Persephone waits until he’s out of sight before turning to face the double throne behind her, blocky seats that shimmer golden. Her mouth parts, slightly, releasing the overworld’s gasoline-tinged air into this breathless space.

Shadows resolve into the tall slim figure of a man as Hades—lord of underground wealth, lord of anything but death—pulls off his helmet.

“About time,” Persephone says, hands on hips. “We were out there every day for a month.”

Hades shrugs. “I was waiting for the earth’s scent to change.” He reaches up and, although the ceiling is far overhead, takes a handful of soil from Up There. “I gave up waiting.” He rubs the clod between his fingers until it crumbles into nothingness. They stare at each other, every subtlety mastered—the flick of an eyelid, twitch of the lips—as only immortals can.

The silence drags on and we fill it with song.

This, always, is their first meeting. Here, dark Hades tricks Persephone into staying in the underworld, snaring her with human ritual. Zeus and Hera have the Sacred Wedding. Hades and Persephone have ... this, the marriage rites of ancient Hellas, whose name has outlived the last olive tree.

“The balance is off,” Persephone says.

We sing, loudly, do not eat of the underworld, innocent girl!

At last her shoulders soften, her pose loses its confidence. Persephone extends her hand, and in a child’s voice, “I am hungry. Please.”

“Of course.” Hades hides a smile, plucks a pomegranate from thin air and cracks it open. Even in the ambient lighting of his realm, each seed glistens, wine-dark at the edges, tapering into milk where they nestle against each other.

Persephone takes the seeds and puts one, two, three in her mouth. Chews. Keeps chewing.

“What is it?” Hades asks, careful to sound insouciant, knowing he has won her over.

Persephone spits the seeds back into her palm. They are unmarred. She and Hades stare at each other, horrified.

She is in a sensible pantsuit, every stitch bespoke, the CEO of a breakfast conglomerate: forty percent of the world’s supply of grain and three proprietary pollinators—two Varroa-resistant bees and an ant immune to most fungal infections. But none of these are why her voice is echoing hoarsely through the preserve.

“Where is she?” Demeter screams. “Where is Persephone?”

We croon loss and grief. We add the high notes of a mother who, for the first time, has left her child alone and regrets it, knowing her daughter will never be innocent again.

The friends huddle together. One of them is hitching her breath, trying to force tears out. You don’t think she will. Whatever emotions are in the air now, fear isn’t one of them, and she is not as good an actress as she thinks. But, trying her best, she blubbers, “She was stolen.”

“By whom?” All of a sudden Demeter’s fury is pulled into a tight point, ready to launch. “Tell me what you saw—”

“Mother,” Persephone says. By the flattening of the grass nearby, you know Hades is also present.

Demeter’s eyes go round and her jaw tightens. Counterfeit anger whooshes from her body. Her blazer clings to limp arms. The friends, too, have let their phones fall among the grass, backs stiff, all trace of playfulness—pretend or otherwise—gone. The one who was trying to cry is now trembling with the effort of holding in a wail.

“You’re not supposed to be here,” Demeter whispers.

“I know.” Persephone shakes her head. “It didn’t work. I couldn’t eat the seeds.”

“Last year you had no problem eating three.”

“Still.” Demeter’s head shakes. She has retreated to the role she holds in every story, the eternal mother, hiding her trembling hands in too-small pockets. “You must, my dear. Try again.”

“You think I didn’t?” Nervous energy radiates outward from Persephone. “Mother, I tried. I promise”—she looks at the space next to her—“Tell her, Pluton.”

Hades’ voice echoes, and you’re not sure if it’s the helmet or his presence. “We tried, Demeter. It is worse here than it was before. The soil is … different. It no longer smells of the seasons.”

Demeter sits on the ground, which immediately tries to soak her clothes green. “Then we will not have winter this year.” She runs fingers through the grass. A few stalks mutate, feebly, into something taller with frayed ends, something recognizable to the ancients who named her. She pulls one stem from the earth and chews on its slender length. “We will try again,” she says. “We must keep trying.” She frowns. “Our scientists keep adding vitamins to the food. They say it is not as healthy as it used to be. They are right. Winter brings sleep, rest. Without rest, there is no renewal.”

They are so close, you can see their shadowed eyes, the tired limbs. You want to reach out and tell them. But you cannot. You make them what they are, you and every other child of the Anthropocene, and you cannot unmake what they have become. You are the setting, not the chorus.

We are listening, but we, too, need time. We were made to sing, not write new songs.

Persephone and the others are nodding to Demeter’s words. Hades’ helmet clanks; the friends, poor nameless nymphs, committed to their bit roles, are ready  to have the same inane conversations and cower for however long it takes to bring winter back.

“Good. I will see you tomorrow.” Demeter spits out the stem. It takes root and straightens up, swelling into ripeness.

There is no place for its seed to go, yet.

Priya Chand grew up in San Diego and now resides in the vicinity of Chicago. She has previously been published in Clarkesworld, Nature Futures, and Analog SF, among others. Her interest in ecosystems stems from a background in biology and a love of marine life. When she’s not reading, writing, or eating, she enjoys swimming, martial arts, and naps.