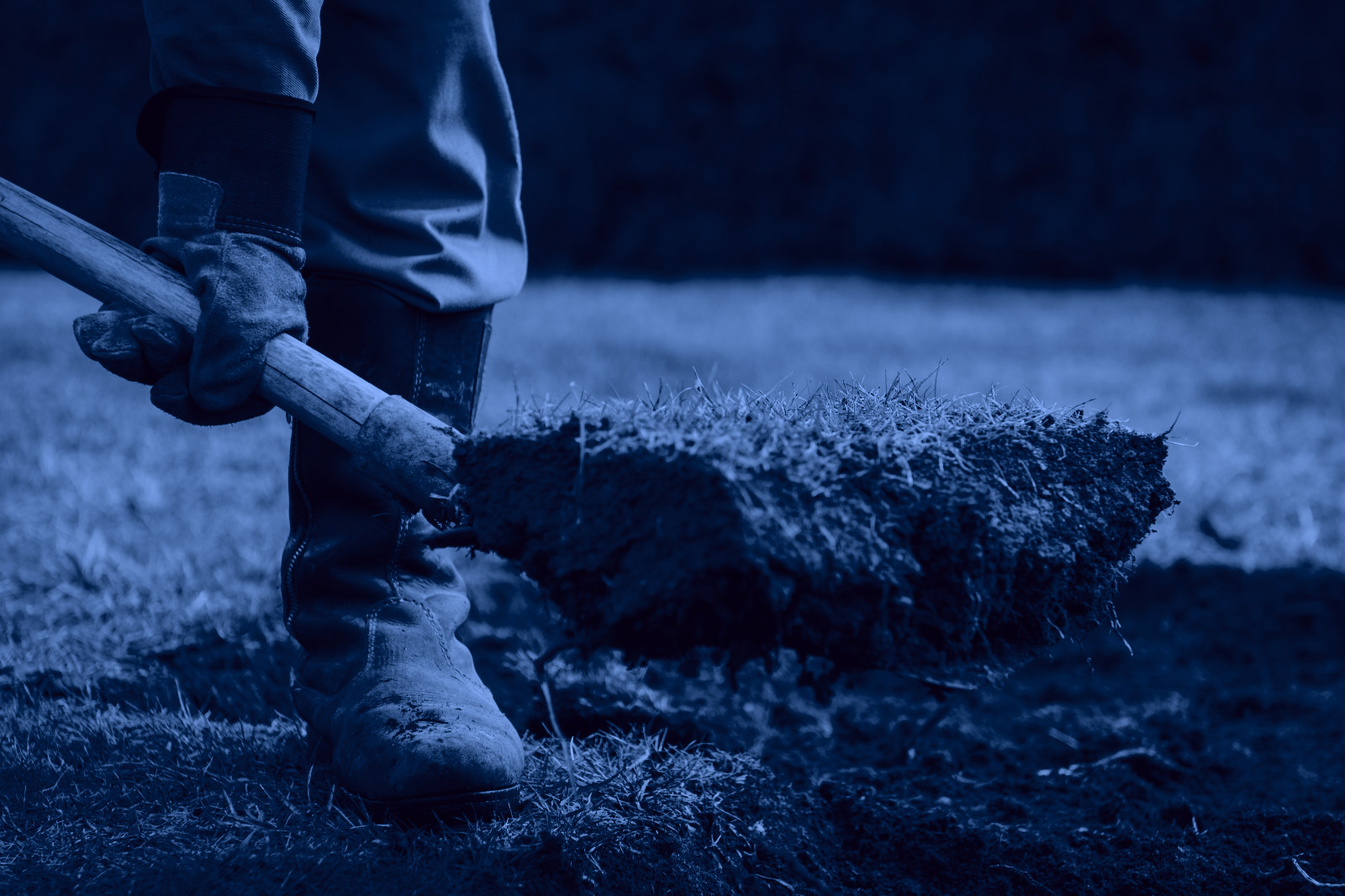 Carlotta said, “The first rule of yard work is—”

OK, sometimes it’s not Fight Club, even if you actually are in Los Angeles.

We were in Northridge. Just off Reseda, not quite at Cal State. We’d driven past all the blocky apartments into where the single-family houses were.

Our white Department truck was parked in front of a classic single-story ranch house: beige stucco exterior, grey wood-shake roof. Double front door, double windows next to that, and an attached garage. It looked a lot like my dentist’s office, actually.

The lawn was perfect.

It was one-thirty in the morning. There was only a crescent moon, and the streetlamp was at the other end of the block, but I could still see that the lawn was lush and green. So green. Even in the dark, you could tell. We were in the third year of what everyone was now calling the Great Drought, and an awful lot of water had gone into keeping that lawn so ... verdant. And it had been edged like someone had crawled around it with nail scissors.

The musky sweet smell of jasmine hit me. There were plenty of the white, star-shaped plants on either side of the house, and the hot Santa Ana winds blowing all the way from the desert stirred them. Back when I had been a kid growing up here, the Santa Anas were pleasantly warm. Now they were just plain hot. Even in December.

As with any strong wind in L.A., it made me look up. There was a skinny palm tree on the lawn, about a foot away from the sidewalk. Its trunk raced up fifty or sixty feet. When it gets windy, sometimes palm fronds are knocked loose and fall. They can be as big as a dog, and some have sword-sharp points. A guy could get run through.

I heard the fronds rustling and crackling above me. Was it the wind or the rats some people said nested at the tops of palms? I took a step back, placing myself out of the way in either case.

Carlotta reached in through the truck’s rolled-down front-seat window and pulled out her hard hat. I’d been wearing mine ever since we’d left the dispatch office. No Dayglo orange. They were black. Of course. What else would you wear for a night job? I felt cool and stealthy in it. Plus they went great with our blue denim uniforms. Of course, I’d had to roll up my sleeves, and neither of us was wearing an undershirt. Too hot even at night.

“Shhh. It’s the middle of the night. Quietly.”

“You better Got It, kid. It’s all about the Department. What they want goes. Sometimes the homeowner might try to talk to you. A good-looking young guy like you, maybe the lady of the house invites you in. Maybe the man of the house even. Some of the bigger places, maybe the maid or the butler. They want to do something extra for you, so you’ll do something extra for them.” She held up a finger that declared as assuredly as any burning bush: I AM THE LORD THY GOD WHEN IT COMES TO YARD WORK. “Do not.”

Life is a movie. Sometimes it’s The Ten Commandments.

“Exactamente. Glad you paid attention at orientation. Or dislike anyone personally. You are here to work.”

“I am here for the Department,” I said, throwing a noble and dramatic spin on it. “I act out their will. Ooo! Like I’m an actor and the Department is my director.”

I nodded. I wanted to make a good impression. Carlotta was two or three times my age, and she clearly knew her stuff. Someone had told me she’d been with the DWP since the Nineties. I was honoured she’d taken me on.

I’d been out of college for six months, which meant my student loan repayments had just kicked in. You’d figure in Los Angeles there would be a lot of positions for someone with a B.A. in history and a minor in film studies. I’d always figured I could get a job in the movies, checking things to make sure no anachronisms crept in. No kilts in Braveheart because no one would wear them for a couple more centuries. No Raquel Welch poster in The Shawshank Redemption because One Million Years B.C. didn’t come out until the year after Andy escaped. Then there’s that kid wearing a digital watch during the Civil War in Glory ...

Hollywood needed people like me to check things like that. Or so I’d thought. Turns out, even in Hollywood, you can’t really make up your own job. There was nothing in the Times or on Craigslist about a professional anti-anachronism checker. There weren’t even any mail room jobs for me to start in and work my way up. There weren’t any mail rooms anymore. It was all email.

Time was, somebody in my position might go get a job with the post office. But the USPS wasn’t hiring either. Budget cutbacks. So ... the LADWP. It’s one job they can’t outsource to India or Mexico. The snowpack up in the Eastern Sierra Nevada, the aqueducts, the powerhouses, and the wires are all right here and they aren’t going anywhere. So the pay’s not great, and the hours suck, but ...

Life is a movie. Sometimes it’s The Wizard of Oz. And, as Frank Morgan as the Wizard says: “Times being what they were, I accepted the job.”

“The second rule of yard work is: ‘Always check your paperwork.’” From out of nowhere, it seemed, Carlotta produced a clipboard. “OK, kid, what does the sign say?”

“Excellent, kid. That’s what it says here on the paper. You do not want to do your job at the wrong place. First of all, you’ll only have to do it again at the right place. Plus, the place you did do it — Ay! They wake up in the morning and see someone’s messed with their yard ... No, kid. And the Department will hear from them, you can bet. Not good for you.”

She led me around to the side of the truck and opened one of the boxy compartments. The door swung up slowly on silent hinges. “Custom-made for the Department,” Carlotta said. “Because rule number three of yard work: ‘Be quiet.’ You are not supposed to disturb the homeowner. You got that, kid? In the best-case scenario, you never interact with the homeowner at all. Believe me, they don’t want to see you, so you don’t want to see them.”

She pulled out two pairs of gloves and handed me one. She pointed across the street.

“That guy over there replaced his whole lawn with a rock garden. That’s smart. We’re all supposed to be using fifty percent less water. Even less eventually. Guess that’s the easy way.”

I pointed to the house on the left of 342. “That’s the easy way,” I said. I’d noticed it as soon as we’d driven up. Whoever owned it had simply let the lawn die in the Drought. Hadn’t even bothered to replace it with anything. Whatever remained that wasn’t dirt was yellow, brown, and scraggly. I craned my neck. The house to the right had a “lawn” of ground-cover juniper that looked like a hundred downed Christmas wreaths. There were a few cacti tossed in for decoration. I frowned. Which was worse, the totally deadbeat lawn or the half-assed lawn?

“Yeah,” said Carlotta. “But I like the rocks. All rocks, no water, no yard work. Of course, that puts people like you and me out of a job.” She put her hands on her hips. “But Mr. Three-Four-Two here ... A lot of work to do. He’s not even one of the biggies. Someone up in Bel-Air used almost twelve million gallons of water last year.”

“Makes sense. You got a big mansion, you got grounds.”

“Don’t they know it’s the Great Drought? That Bel-Air guy is the biggest residential user in the whole of California. It’s like war, kid. Supposed to be that we’re all in this together. At least most people have stopped hosing down their driveways. Man, that gets to me. What do they think, it’s gonna make them grow?” We walked to the back of the truck, and I pushed aside the blue plastic tarp in the bed. “I only got a ten-by-fifty strip, but I’m gonna water it ’til it’s a circular driveway like up in Westwood. I don’t think so. Loco.”

She pointed, and I grabbed two shovels from the back of the truck.

“What about cones?” I asked. “Do we get to put out cones?” We had a couple dozen orange cones stacked in two piles on special mounts at the front of the truck. Marking our work zone with cones would be very professional.

Carlotta shook her head. “Nighttime. What do you think? Who’s gonna see? Plus we don’t want to draw attention to ourselves.”

I was truly disappointed. The cones would have been cool.

Life is a movie. Sometimes it’s A Christmas Story (Just the scene where Ralphie receives the pink bunny suit).

Carlotta scanned the lawn with the practiced eye of a surveyor. She positioned herself on the sidewalk at about the lawn’s midpoint. She pointed for me to stand next to her.

“Work your way up to the house. Then you turn right and work back down to the sidewalk. I’ll go to my left. Start digging.”

“Just an inch. Leave the topsoil. If you can roll up the lawn sod in nice long strips a foot or so wide, that’s best. And fastest.”

“Where’s all this stuff go anyway?”

“Back east, I guess. You don’t have to worry about how much water you use out there.” Carlotta snorted. “Or maybe it goes to that place in Bel-Air. Hey, maybe that’s why he needs all that water. He’s a lawn hoarder.” She laughed. “I dunno. All I know is the last rule of yard work: ‘When the DWP tells you not to use so much water, you better not use so much water.’”

The house’s porch light came on.

“Hey, you!” a man screamed from the front window. “Get away from my lawn! Beat it! I’m gonna kill you! I’m gonna—”

Copyright © 2018 by Kevin Lauderdale. First Published in Poets/Artists, “Chronicles of a Future Foretold,” August 2018, Curated by Samuel Peralta. Reprinted with permission of the author.

Kevin Lauderdale’s work has appeared in several of Pocket Books' Star Trek anthologies, the journal Nature, and a handful of genre / "new weird" anthologies.  He’s a frequent guest on pop culture podcasts and hosts his own, devoted to the Golden Age of Radio, “Presenting the Transcription Feature.”  Visit him at https://kevinlauderdale.livejournal.com/.