The Windtech
Victoria Brun
Fiction
November 25, 2022
Speciation for the New Millennium
Jon Hansen
Poetry
January 28, 2022
A Sea of Plastic
Bo Balder
Fiction
April 29, 2022
The Trials of the Thorsten Haugen
J. G. Follansbee
Fiction
May 27, 2022
Stewardship
Holly Schofield
Fiction
December 21, 2018
What can we get you? 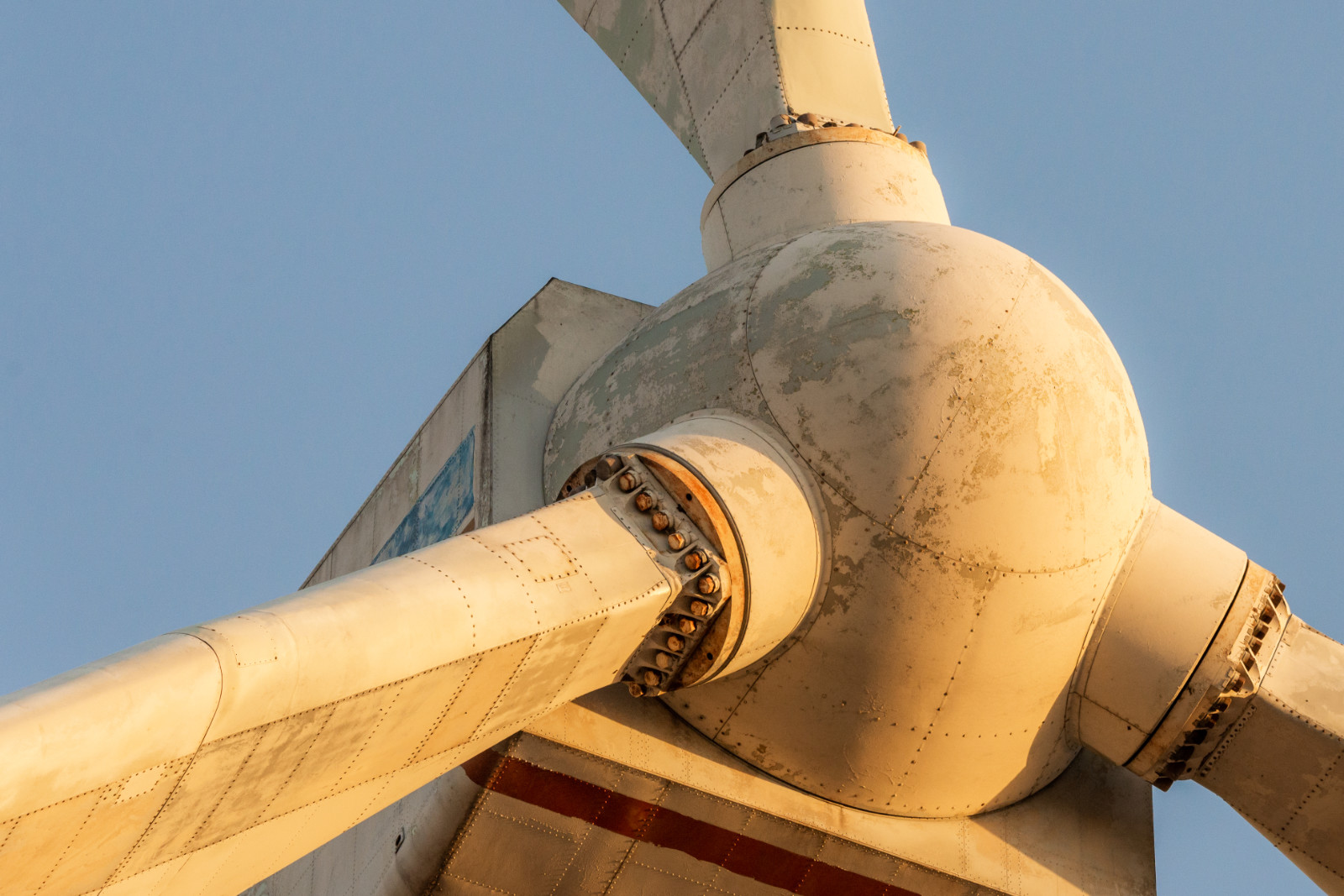 The first thing we learn when the windtech arrives is that wind turbines are female—or at least he calls them all “she” for some reason.

“She looks to be in remarkably good shape,” he says as he peers through a pair of binoculars at the nearest turbine, which is standing idle in the distance. Its blades haven’t turned in years. “The exterior all looks good.”

“It doesn’t put out any power,” one of the townsfolk complains. “It just sullies the view.”

A murmur of agreement follows her words. There are about two dozen of us gathered here. The stranger who thinks he can fix the turbines is big news.

“I can probably fix her,” he says as he lowers his binoculars to study us. “I just need to get up there to see what the problem is.”

“Fix it?” another onlooker echoes. “How are you going to fix it? It’s in the swamp! It’s sitting in ten feet of water!”

He grins and looks out over what once was a huge field but is now eternally drenched in salty water. “That’s not a problem. She’s just an offshore turbine now.”

“How you going to get up there?” someone else asks.

“There’s a ladder inside. If someone could take me out there on their boat, I could climb it.”

“Climb it? Boy, you are going to fall! You can’t climb that!”

His expression and the grey in his beard suggest that he is unused to being called “boy.” However, he recovers quickly and forces a smile. “I promise I won’t fall.” He motions at the duffle bag slung over one broad shoulder. “I’ve got all the proper safety equipment, and I always use a 100% tie-off.”

The townsfolk remain unconvinced. We hold a whispered side conversation, pretending he can’t overhear. Everyone proclaims how ridiculous this is—this outsider thinking he can revive the broken turbine.

It’s not his fault; he tried his best to convince us. His easy smile, easy demeanour might have appeased other towns, but we’re the people who stayed behind, and we’re as suspicious as they come.

Most people have moved inward—away from the flooding coasts and country and into the inland cities. Towns like Louisville, Kentucky, and Wichita, Kansas, are now the places to be. They say the new cities are nothing like the old ones. They call them “smart cities” now—and “green cities.” They claim they are clean and safe. And we do not trust them, we who stayed behind in the hot, flooded remains of the New Coast.

“So,” the windtech says, interrupting our whispers that have morphed into pure conspiracy theories. “Would anyone be willing to take me?” He motions at the turbine sitting in the swamp.

He sighs. It’s a well-earned sigh, because he’s already explained this three times. “No. I’m funded under the RENEW Act. I’m part of a corps of people working to restore—”

“Government,” someone interrupts him in a tone laced with distrust. “Working for the government.”

“Right,” he says. “So no one needs to pay me. But I do need a lift to the turbine. I’m afraid I didn’t bring my own boat.” He smiles like it’s a joke, but we can see he’s getting desperate. It’s in his eyes.

Several people shrug. A few people leave, wandering off like they suddenly remembered an errand. Some mutter excuses before leaving. Others just laugh at him. They want to see him fail.

“I’ll take you,” I say, the words leaving my mouth in some strange fashion that seems to have bypassed my brain. Everyone looks at me. His eyebrows arch high with surprise, and I think he’ll say something about me just being a kid, but he doesn’t. Instead, he grins. It’s a real smile this time, without the desperation.

I lead him to my little jon boat, a flat-bottomed aluminum craft. It’s ancient. Probably older than the turbine—but it’s held up. He sits in the front, and I sit in the back to steer.

He runs his fingers idly through the water, but I warn him not to. We have alligators, Burmese pythons, and who knows what else in there. He yanks his hand back.

We make small talk over the roar of the motor as we head to the turbine. I casually slip the fact that I just graduated high school into the conversation, so he doesn’t think I’m a little kid. Everyone in town seems to think I’m eternally a kid.

He asks me what I’m planning to do next. College? Trade school? Work?

I tell him I don’t know, which is the truth.

He says there is a demand for wind technicians. I could do an apprenticeship for it. I just shrug at the suggestion, but I feel a swirl of excitement as we arrive at the base of the idle turbine. There is something exhilarating about this—of doing something.

He stares down into the murky water around its base and sighs. “The access door is under there.”

“How you going to get in then?”

“I guess I’m going to get wet.” He stuffs his duffle bag into a black garbage bag and knots it. He casts a quick look around the water. “Let’s hope I get lucky on the gators.”

“I’ll watch,” I say as I reach for the whistle on my lifejacket. A loud noise should scare a gator away, although I don’t know what I’ll do if I see a python.

The windtech slides over the side of the boat and disappears below its surface with a splash. It’s hard to see in the water, but he doesn’t resurface, and the water stays calm, so I suppose he must have made it.

I look up, watching the top of the tower, what he called the nacelles. I wait for him to appear, as I nervously tap the side of the boat. When he does, I cheer, and he waves down at me. I wave back.

He’s so high up that he looks tiny. I find myself desperately hoping he can revive the old beast. I’m suddenly far more invested in this than in any high school football game.

He had asked me to come back for him in six hours, but I stay nearby and fish. I catch seven fish, but none are even as long as my hand, so I toss them back.

He comes back down in five hours, and swims to my boat. He tosses the garbage bag in first and then hauls himself aboard. Above us, the turbine blades are slowly but victoriously spinning in the breeze. When moving, it is beautiful. I start to understand why he doesn’t call the turbine “it.” She seems alive.

“You did it!” I lean forward to offer him a high five.

He grins and slaps my hand. “That was a surprisingly easy fix—she really was in good shape. Her brake was just stuck.”

“On to the next turbine,” he says as he wrings water from his shirt. Or tries to. “And then to the next town. I’m just going to keep heading south down the coast.”

He rubs a hand along his nape. “Yeah. I reckon I might.”

He smiles again. “I think that could be arranged.”

Victoria Brun is a writer and project manager at a national laboratory. When not bugging hardworking scientists about budget reports and service agreements, she is daydreaming about futuristic worlds, aliens, and magic. Her other short fiction includes pieces at Daily Science Fiction, Uncharted Magazine, and beyond. Find her on Twitter at @VictoriaLBrun.