It’s hot. It’s always hot. It is cooler up at the other end of the field under the shade of the big trees, but I still prefer it down this end, in the heat. The trees are so big, so dark and mossy and quiet—it’s scary. Dad says they grow like that because of the heat. He says that a long time ago it was different.

“You are doing well.” He wipes sweat from his face and smiles across at me. I sway in my saddle and of course it is right then that I almost fall. I grab at the rough scales, my hands slick with sweat, and I try to sit up straight. I don’t need to look back at the house to know Mum will be watching, her hands gripping the yard fence too tightly.

I’ve been at Dad to let me plough since I saw Mikey next door riding. He went by high on the back of their old Steg, wedged between its back plates and looking all serious, even though I knew he was side-eyeing me the whole time.

“Keep her steady.” Dad is on Cranky the Anky, borrowed from Old Johnson for the afternoon. The dopey old thing is almost blind, and happy to just plod along next to the harnessed Trice. I hold on to the reins loosely, like Dad keeps saying, but it’s hard. I’m so high up.

“Old man Johnson says they used to use machines to do this,” I say.

“Your lines are good.” Dad’s praise makes me feel pretty good. They are, too. The black earth is turned over in long furrows that fill the air with a rich, dark smell, lines that go all the way up to the huge tangle of forest that marks the end of the reclaimed land. Mikey can side-eye my lines all he wants, he won’t do any straighter.

“Because the machines made it so hot?”

“We made it hot, honey.” Dad wipes his face. “Keep her steady!” he says then, a sudden edge to his voice. I try, but the Trice tosses her head up, snorting, and then gives a little buck. I shriek and scrabble at her knobbly scales.

Then Dad curses and slips down from Cranky’s back. He moves so fast he is up the knotted ladder and grabbing me from my saddle before I even really register the roaring.

He slides down, ignoring the ladder, wincing as the Trice’s rough hide scrapes his back. For a moment his heart thuds against my ear as he holds me to his side, and then he dumps me on the ground.

There is another roar from the trees. The Trice snorts and tosses her head. I freeze.

He runs too, but not for the house.

I stumble and then Mum is there, scooping me up like I weigh nothing and ducking back through the narrow yard gate. She puts me down and we both turn, silently frantic, wishing Dad to be safe.

He is rolling right under the fence at the battery when the beast pushes from the dark green world beyond the boundary fence. It looks small because the trees are so huge, but it’s really big—big enough to bust through the boundary and charge for Cranky, its horrible mouth gaping, long tail flicking like it has a mind of its own. 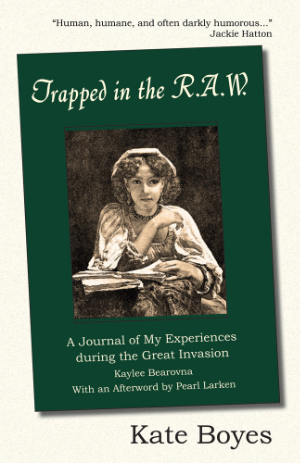 This story sponsored by our Patron, Kate Boyes

There is a humming as Dad reroutes the power to the house fence. Maxing the solar battery only gives enough juice for one big shock, but it is a really big one. It would have been better if Dad had gotten the extra charge through the boundary fence in time, but at least we are safe now. Cranky and the Trice are not.

I begin to pull Mum’s hand away, but then I think of the Trice, how she stands so patiently when you saddle her, how sometimes she will nuzzle you as you try to harness her. And I think of Cranky, that dopey old thing, plodding along, slow and content under the hot sun. I leave Mum’s hand where it is, and my tears are hot against her palm.

Old Johnson looks mad, but then he sighs and rubs his bald head.

“Ah, don’t worry about it.” Old Johnson sighs again. “Ain’t nobody’s fault. And Cranky, he was about done anyways.” He rubs his head again. “Your Trice?”

He looks down at me, all sweaty and hot and serious, but then he smiles a little bit.

“Yes, honey. A long time ago. They were well suited to how things had gotten. You know that. You’ve been down to Dobsley’s, seen the incubators. Seen the babies.”

“I mean we brought them all back.”

Old Johnson rubs his head again. “Was hardly anyone left as to object, back then.” He sounds sour. “Can’t say I understand all the decisions that got made. Used to be we were top dogs.”

Dad shakes his head and a few drops of sweat fall off his grimy forehead. It’s always so hot.

Matt Tighe lives in northern NSW Australia with his amaz­ingly pa­tient wife, not so pa­tient chil­dren, Sherlock the dog and Mycroft the cat. He is an aca­demic in his other life. His work has ap­peared in Na­ture Fu­tures, The NoSleep Pod­cast, Daily Science Fiction, and other places. You can find his sporadic attempts at humour on twit­ter @MK­Tighewrites and other info at https://matttighe.weebly.com/.